The Score (Part One) 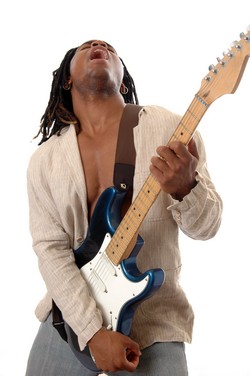 My beloved Sarah Vaughan, on the other hand, whose luscious, languid timbre is the acoustic equivalent of dark rum and Jamaican ginger beer over ice, is like a bullet in the fucking head.

But depending on the mood of the moment, I could have great sex to either. Music is just that powerful, that flexible. As cerebral as it is physiological, it moves us to chortle and weep, conjuring ghosts, triggering the playback of entire events from the past. It impacts us on a level that is primal, and often spiritual. It is an undeniable force that can propel you forward with determination, knock you flat like a sucker punch, ease your legs open—or your cock up—like an aural aphrodisiac.

I love a good oxymoron, don’t you? Music, like any art form, is entirely subjective—but a funny thing happened on the way to my deadline: Harmony. Every person I spoke with—from academics to holistic healers, musicians to simple music lovers—invoked the same allusion: The soundtrack.

“Music makes our lives more like a movie,” says Camille, herself a guitarist and songwriter (and bartender at a live-music venue where she often performs). “Real life has a few exciting moments surrounded by a ton of boring ones, whereas movies bounce from one exciting thing to the next.”

A film’s soundtrack is essential to the experience, melding with what you’re seeing, boosting that emotional response—sadness, suspense, sexual tension—so much so that certain pieces of movie music (the frenetic violins from Psycho, Star Wars’ ominous “Imperial March,” the sinister undulating E-F of the Jaws theme) have become so ubiquitous the songs alone are enough to cue the desired reaction in any situation.

Life’s background music has precisely the same effect. “The music in the bedroom, or wherever it is the action is taking place, can easily serve as a metronome to the experience, whether the participants are cognizant or not,” says Alice, a triple-degreed psychologist and professor at a prestigious New England university. She has played both violin and cello since grade school.

“Classical music has been cited as stimulating to various centers of the brain. It can boost retention and one’s abilities to problem-solve, it can help inspire creative thought. Many great thinkers—Einstein, Thomas Jefferson—listened to music while they were working. So, it’s barely a stretch to imagine that music, classical or otherwise, would boost activity in other parts of the brain, as well. Clearly that would extend to the sexual.”

Rick, who spent years as a touring sound engineer and has mixed more than 2,000 bands, plays the fiddle, guitar, drums, sitar, cumbus oud, darbuka, and mandolin—among others. Not surprisingly, he claims a fierce emotional attachment to music.

“A good jam to a sexy beat gets me hard, no shit,” he says. “Any heartfelt music or rhythm connects with people, any good performance is impossible to ignore, even if the genre is ‘not your cup of tea.’ It could be a random gathering of naked drummers around a bonfire, a single fiddle player or a concert—James Taylor or Slayer. If the performers are feeling it deep down, it transmits right into the soul of the listener and you can’t help but be moved.”

“It’s the soundtrack to your life,” Tony, like so many others, observes. “Following that thread, the music that makes you tingly in your special areas will inform the ‘love story’ section of your movie and be automatically associated with a series of emotions—or a time-capsule moment in your life.”

Erin says in the right instance, a given song can bring back memories in almost photographic fashion. “I hear Madonna’s ‘Like A Prayer’ and I can just about taste the wintergreen Lifesaver my high-school sweetheart was sucking on the first time he kissed me,” she confesses, pausing for a sigh before adding, “I can smell the rain outside the car window and the pine-tree air freshener hanging from the rear-view mirror. It didn’t smell like pine, though. It was coconut.”

Yet Erin is hardly a Madge fan; she’s a Country/Western kind of girl. “Almost exclusively,” she admits, “I never listen to Madonna on purpose, but you know—you shop in stores, you go to bars, you get on elevators and there’s music playing. And when I hear that one, I just melt. Every time.”

Musician-turned-neuroscientist Daniel J. Levitin wouldn’t find this at all surprising. In his fascinating read, This Is Your Brain on Music: The Science of a Human Obsession (Penguin, 2006), he explores—among many other things—the way music works with memory. It turns out that the songs you don’t often hear can be the most powerful.

“Although certain songs may be associated with certain times of your life, they are not very effective cues for retrieving memories from those times if the songs have continued to play all along and you’re accustomed to hearing them…” he writes. “But as soon as we hear a song that we haven’t heard since a particular time in our lives, the floodgates of memory open.”

The song, says Levitin, acts as a unique cue, unlocking all the experiences associated with the memory for the song, its time and place.

Brooklyn natives Michelle and Joe, both 50, graduated high school in 1977. They married straight out of college four years later in ’81. Disco was dying and they’d fallen in love with Springsteen, but the genre had left its mark. “ Saturday Night Fever was the hottest movie and record everywhere in the country when we were teenagers,” says Maria.

“But we lived it!” Joe says. “It really was our soundtrack!”

And every time they get together with the old crew, a few drinks go down, someone puts on KC and the Sunshine Band “and before you know it, we’re doing the Bus Stop and the Hustle,” Joe laughs. “Then we all go home and whoever can still get it up gets some.”