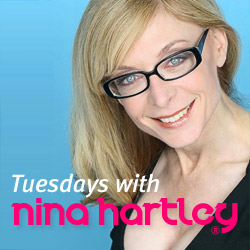 So, you've got your period, you want to have sex but you aren't crazy about the mess? There are options for those who don't want to give up sex for a week just because Aunt Flo's town. This week, Nina talks about ideas on how prevent the mess while enjoying sex on your period.


Got something you want to ask Nina? (Of course you do.) Drop her a line at tuesdayswithnina@gmail.com. Now, while can’t promise that every question received will get a personal response, however, those that do will be answered frankly, entertainingly, enlighteningly and, if we know Nina, in the spirit of happy, healthy sex and a satisfied libido.
Tags:
Views: 1247
Related articles

Nina Hartley
For me, sex has been my vocation, my meal ticket, my path to happiness and self-understanding. It’s taken me all over the world: Germany, Sweden, Spain, New Zealand, Canada and Australia. It is my meditation and communion with my husband, Ernest. My interest in sex is unabated by all that I’ve had: I’m always interested in it: watching it, doing it, helping others do it better, listening to others have it, lending a helping hand (quick, more lube!). Since it is a body-based activity, the good that comes from it lasts and lasts and affects other parts of my life. There is always something to learn about oneself through sex, even less-than-satisfying sex.

I don’t have bad sex any more, ever. By making conscious sexuality my mantra, I always get the most out of every sexual experience.

Other articles by Nina Hartley