Period Sex: Blood In, Blood Out 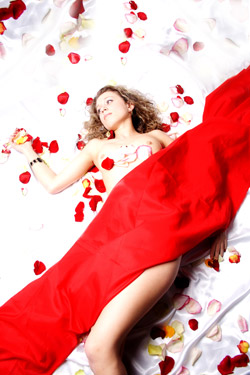 On a 1 to 10 scale of Internet freakydeaky, I’d personally place period fetishes at a rather tame three or four. And if any of you wonderful readers have a lust for the moon blood, alas, this is not your story, but a quest to discover how many people are unwilling to go to town when Aunt Flo’s in.

“We want a story about period sex,” my editor told me.

Sure! I said, but privately I worried. What would I write?! The only Jane Austen I ever even sort of liked was the recent rewrite/collaboration Pride and Prejudice and Zombies and most Merchant-Ivory films have this reverse-amnesia effect on me in that I miraculously remember the bathroom needs cleaning. Then it hit me. She meant a story about sex on the rag.

It was early. I hadn’t had my coffee yet. Okay, I thought. That I can do.

And if this isn’t a clear indicator that the vampire fad has finally, mercifully, jumped the shark, I don’t know what is.

The impetus for this foray into the menstrual mambo, or one of them, was a charming little op-ed that ran in an upstate New York college paper wherein a would be Carrie Bradshaw-cum-juvenile frat guy compares waking up after a night of unwitting red love to the infamous horse’s head scene from The Godfather, then proceeds to get all Dude, that is so totally, like, gross! about it. One hundred and forty-three comments later (Gee, do you think their articles about the new meal plans get that much feedback?) a slew of would-be feminists and alumni are calling for the poor kid’s head—along with the paper’s EIC and adviser.

The piece was not particularly compelling (I confess one of his junior-high one-liners made me chuckle) but it did get me thinking I’d hit the sex-partner lottery. As I meandered down memory lane, I couldn’t recall any past lovers who were noticeably averse to dipping their wicks—or anything else, for that matter—around that time of the month. And I do remember one rather intense and sultry afternoon delight during which one of them seemed to almost revel in it, which worked out quite nicely for me.

Wouldn’t that be the best bumper sticker ever?

A quick search on the Google and, as with anything your sick mind might believe it was the first to imagine, you’ll find there are a host of sites dedicated to said predilection. And so my new word for today is menophilia, which is the term for being excited by a menstruating woman and/or aroused by the sight, smell, taste or sensation of menstrual blood.

On a 1 to 10 scale of Internet freakydeaky, I’d personally place period fetishes at a rather tame three or four. And if any of you wonderful readers have a lust for the moon blood, alas, this is not your story, but a quest to discover how many people are unwilling to go to town when Aunt Flo’s in.

Going with the Flow

Given my experience, it wasn’t all that surprising when I asked around a significant pool of more-or-less typical straight guys, across the race, age and relationship-status demographic, and found that most didn’t think it was all that big a deal—with one or two falling on the more extreme ends of the attraction/aversion scale.

And the women, gay and straight, seem to fall along the same lines—with a couple reporting that their cycles made them extraordinarily randy, and one readily admitting she’d stab her partner for suggesting it, leave him where he dropped, and go back to the couch and her bowl-mug of hot cocoa. That was more about cramping than the mess-factor, though, which was the number-one reason my female respondents close up shop that week.

“When I was single, I was more into it,” said Stephanie, 25, a lesbian. “After five years, my partner and I still have a pretty decent sex life—not to mention pretty well-patterned menstrual synchrony—so unless one or both of us is really insistent after a good happy hour…” She trails off, laughing. “It’s just a hassle. So, why bother?”

When the pair was just dating, however, things were different. “Lesbians definitely enjoy penetration, but there are a lot of other things we can do with just clitoral stimulation—hands, toys, tongues; the mess is nothing a tampon can’t hold back.”

“A little mess comes with the territory,” said Spat, 39, who’s earned red stripes with several partners. “If I were that worried about dirty sheets, I’d still be a virgin.”

She has no recollection of lovers past abstaining for menstrual reasons, but says she “gets” why some men might be grossed out. “My guess is that most haven’t tried it and have an unrealistic perception of what it’s like. My husband has no problem with it. Admittedly, that may be because he feels like he needs to get in on it when he has the chance. If I’m offering, on the rag or not, he’s taking me up on it!”

How, I marveled, could a little menses on your man parts inspire such outright revulsion, while the possibility of— Jeebus, forgive me—“dook-on-the-dong” was no biggie?

Sal had no answer. My Vulcan logic had rendered him ineffectual.

This was precisely my point (And I specifically note: Not that there’s anything wrong with that).

For many men, conquering this uncharted territory is a primal and oft-unfulfilled desire (one that Sal admitted, for him, has roots in a domination fantasy). A woman’s period is certainly natural, but its roots are planted firmly in reality; the reality that sex, biologically speaking, anyway, isn’t just for fun.

This is almost certainly not what Willis was talking about. Even so, the subhead makes a good point—not everyone digs on the same thing. My homicidally menstrual friend told me she’d prefer a boyfriend who was turned off by her period, which is particularly debilitating. “I really just want to be alone most of the time, anyway. Even going to work is an effort that week. I’m counting the years until menopause.”

Should you dump a guy because he’s not in for the blood bath?

“I think [men] just don’t have enough information about what menstruation is all about,” says Kim, 43 and 18 years married. “After all, it’s just sex. They can use a condom if it bothers them. My husband doesn’t care either way. He just grabs a towel or we go in the shower.”

Not unlike your friends who hawk Pampered Chef or scrapbooking products, Kim has been a purveyor of sex toys and other naughty goodies via private house parties for five years and remains in awe of the things left unsaid between partners. “I’m always shocked,” she says. “They’ve been together for years and still can’t tell their partner what they want in bed. It’s very disturbing.”

Like my own, Kim’s list of partners past is littered with willing men. “I dated this one guy for four years and we had sex everywhere!” The pair spent a great deal of time at the beach. “One time we were in the water and I told him that I was on it.” Stunted by the news, he worried aloud whether it might draw sharks. “Talk about wasting a hard-on!” she jokes.

Spat summed the consensus up quite nicely, I thought. “For me, a green light is a green light. And I’m not going to turn down sex just because of a little blood. Especially when it’s not mine.”
Tags:
Views: 2622
Related articles