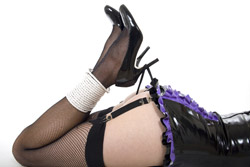 I can’t count the amount of times a hypersexual mood has convinced me within a breadth that sleeping with someone would make me feel better. Scratch that, rewind—feel something. And then, afterwards—feeling unclean, guilty and manipulative, as the choices I’ve made have not been my best.

“The magic of sexual addiction is you don’t ever feel hungry or tired or bored or lonely.” —Chuck Palahniuk, Choke

That’s not entirely true—sexual addiction and acting out on one’s hypersexuality can equate to a person feeling lonelier and reaching a plateau where even grander acts are needed to get the same high. Palahniuk did hit the nail on the head later in the book: “I have sex with strangers because I’m incapable of doing it with someone I actually like. I can’t even ask anyone out on a date because if it doesn’t end up in a high speed chase, I get bored.”

While mocking hypersexuality, Choke also tore down the notion of it being just about sex—by linking the disorder with self-esteem and coping issues. In fact, members of Sexual Compulsives Anonymous consider sexual addiction a disease with three facets: physical, emotional, and spiritual. They believe that they engage in sexual behaviours known to be unhealthy and jeopardizing in order to achieve a high while thinking about (or engaging in) acting out, which is swiftly followed emotional letdown and disconnection from others.

I can’t count the amount of times a hypersexual mood has convinced me within a breadth that sleeping with someone would make me feel better. Scratch that, rewind—feel something. And then, afterwards—feeling unclean, guilty and manipulative, as the choices I’ve made have not been my best. I’ve slept with exes, thinking that we were engaging in a mutually sought-after sexual encounter, without strings attached. It wasn’t until after, when our breathing had returned to normal, that I would realize they thought it meant more. That I was using them, and they weren’t using me back.

Talk about how to make yourself feel like an asshole.

Hypersexuality can occur as a side effect of medication, in conjunction with mood or obsessive disorders, and as a result of neurodegenerative diseases, brain injury, and neurological conditions such as Alzheimer’s disease. Being bipolar explains why I’ve frequently felt its effects.

Because of this, it’s mostly seen during the manic or hypomanic phases of bipolar people, a time when by the cycle’s very definition, extremes are sought-after. Excessive spending, eating, wakefulness, sex—all of these behaviors can be linked with the same intent: bigger, better, longer, more feeling, more reaction and more stuff.

Hypersexuality differs from sexual addiction in two major ways: severity and scope. While people dealing with hypersexual moods can feel annoyed by their symptoms and thoughts, they have a greater feeling of control over their actions. Addicts tend to become obsessed and feel powerless against the condition, despite potential consequences. Important though is the fact that untreated, unrestrained hypersexuality can lead to sexual addiction.

As with most addictions, sexual addiction has no specific cause, though a tendency toward hypersexuality, low self-esteem and gratification-seeking behaviour has been linked with the condition. It was estimated by Patrick Carnes, Ph.D., the researcher who first identified sexual addiction as a condition, that about 8 percent of men and 3 percent of women from the U.S. population are sexually addicted. Despite potential losses of health, jobs, marriages, or freedom as a result of their sexual escapades, those who are addicted suffer from a loss of control and often-compulsive wishes to:
• masturbate
• engage in sex with sex workers and multiple partners
• have multiple affairs outside a committed relationship
• frequently patronize sexually-oriented establishments
• engage in habitual exhibitionism and voyeurism, fantasy sex, prostitution, masochism, fetishes and crossdressing

Whether married or in a relationship, monogamous or open, and regardless of how severe symptoms are, both hypersexuality and true sexual addiction can be disastrous—obsessive behaviors of any kind by one partner in a relationship cause tension, cross lines of what is acceptable and can make the healthier partner doubt whether they can trust the other. Each person in the relationship may be annoyed with the other’s sex drive, and then there are the requisite trust issues, blurring of acceptable boundaries within the household, and even sexual dysfunction that can come with loving a sexually compulsive partner. There’s a limit to how much understanding a non-afflicted partner can share, with the potential of adultery, damaged finances, repeated demands for sex and/or lackadaisical work performance on the table.

It’s important to keep obsession at bay, especially in a relationship. With divorce rates pushing 50 percent, and apparently almost half of those caused by infidelities, acting out on sexual obsession can cause irreparable damage to a relationship. And “I was manic” doesn’t quite cut it when you’re standing in front of a judge in divorce court—even if you have a doctor’s note, and even if all of your symptoms were caused by a bipolar mood swing that your spouse knew you’d be prone to.

Can someone experience hypersexuality and not really be harming anyone, you ask? I return a question to you: Who’s really the person to judge that? I’ve always felt as if my hypersexual nature didn’t hurt anyone: my one-off partners weren’t promised love; and my committed relationships were always free of cheating. In fact, I actually thought that relationships were bettered by my rampant urges. What guy, after all, doesn’t want it as much as he can get it? But I missed out on one teensy detail that was only recently revealed by an ex: Very few people want to be treated as my personal whore, and I often treated sexual partners, whether in a relationship or not, almost clinically—as if they were robots, meant to function at my varying whims.

Addicts and hypersexuals need to talk. Whether it’s the 12 Steps, a local Sexual Compulsives meeting, cognitive or group therapies, or bringing a partner with them to see a relationship counselor, talking can avail the sufferer (and loved ones) some of the stress and guilt they’ve felt and teach some pretty great coping mechanisms.

Meditation, yoga, Tantric breathing and exercise force focus on breathing, clearing the mind and giving a centered focus on reaching a specific goal unrelated to sex—such as training for a half-marathon or having perfect posture while in cobra position. These alternative methods are a great prescription for the obsession that might allow us to act on inappropriate impulses, also producing endorphins, chemicals that produce a natural high. Endorphins can often defeat depressive mood swings, and for some bipolars, diminish the severity of their mood swings.

Lastly, medication can be considered. Antiandrogens can suppress testosterone’s effects, meaning that because of a biochemical reaction, mojo is lost; some anti-depressants (such as Zoloft and Paxil) that are known to cause dampened sex drive without long-term side-effects; bipolars who become manic on anti-depressants can take a mild mood-stabilizer, to reduce the hypo- and manic mood swings that cause hypersexuality in the first place.

So, what about me?

I choose a multi-level program of therapy because feeling like an asshole for nailing your ex-boyfriends isn’t really worth it—and one day, even I might want to be in a committed, trusting, married relationship. The risk of indulging hypersexually, and it becoming a costly addiction, personally and financially, is a sobering concept to me.

But in the end, I’m going to be just fine.
Tags:
Views: 1080
Related articles