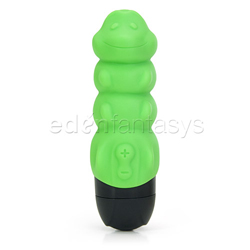 Oh sure, there were a few penises and vaginas in the store—mostly pocket pussies and bachelorette party gags—but the items suggested for my own personal genital use either sparkled or glowed, giggled or fluttered, in a myriad of strange shapes and faces that I’d never even considered putting into my twat.

And I hadn’t even counted the dolphins yet.

Party in Your Pants

Until I held it. The strange, swirling beads inside rubbed against my palm, soothing and massaging as it buzzed with the power of a high-speed band saw.

It felt so awesome.

But then, one of my girlfriends at the party interrupted my hand massage by saying, “This thing is staring at me.”

We all stopped and looked.

Sure enough, molded into the tip of the long, white appendage my girlfriend held was a face, subtly hidden under a habit-like covering, with round cheeks and a very displeased expression.

“It looks like Baby Jesus!” another cried in horror.

But, it made me think (as I wrestled with my girlfriends for possession of the Turtle), it’s not like I’ve always masturbated with a perfect representation of the male genitalia. I’m hardly a purist. Just the other day, I was in the thrift store and I found a dusty old box with the classic vibrating “face massager” in it, and I almost bought the thing.

To Each Their Own

So, back to the sex store… As I’m staring at the Easter Bunny, ranting, “What’s so damn sexy about a dolphin, anyway?” when my husband reminds me that some people might not want a penis or a vagina introduced into their sex.

Then I thought about it coming to life, animated by Eastern demon magic and cackling in that chipper dolphin way, “Plaaaaay with meeee!” and I had to smile.