Clearing the hurdles: Our struggle to conceive a child (Part Three) 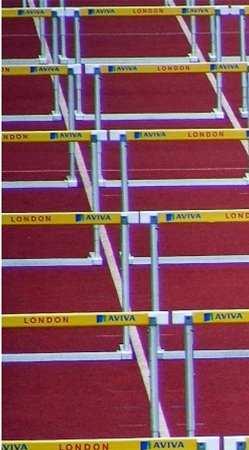 Hurdles by Dave Heather @dphotographer.co.uk
Our battle to become pregnant had a lot of downs and one very special up.

"A child is both a gift and a curse. After 3 years, the curse starts. This doesn't end till they're in their 30s."

I spent six months in Montana. The whole time there I stayed in constant contact with Joney. We were very much still a couple. I wanted to make it work as much as she did. I begged her to come up to Montana with me. She refused every step of the way. She didn't want to leave her family. She didn't want us to have a child so far away from everyone she knew and loved. In the end, I reluctantly buckled and decided to take a greyhound back to Missouri. Side note...have you ever been to Montana? Okay. Have you ever been to Missouri? Which one would you want to live in? That is what I funking thought! Moving on...

I hadn't had sex in six months. Sure I had my chances while up in Montana, but I didn't want to cheat on Joney. No matter how far away I was and how sure I would be that she would never find out, I stayed true to her. So needless to say the first night we were back together in that shitty motel near the greyhound station, we had a lot of sex. It had built up over those six months and we just unloaded. It was fantastic.

A week later I moved in with her and her brother. I know right! What in the hell was I thinking! It was cool though. Her brother was dating a typical hippy chic and things were pretty mellow. I landed a job as a cashier at a local liquor store and things were looking pretty sweet. About a month later, Joney told me she was late. We immediately went to a drug store and bought a test. We had been down this road a few times before, but nothing ever came of it. It became kinda routine. We knew as soon as she took a test a few days would pass before her period decided to show its ugly face. It was just how it was for us. So when we took that test that day, we were more than dumbfounded when we discovered it was positive.

Of course you start to doubt the test. We had to get a more clear sign that she was in fact pregnant. The only really quick and easy way for us to find out at that time was to go to Planned Parenthood. We paid the fee and 20 minutes later we had the results. The test wasn't lying. We were in fact pregnant. This caused a huge wave of emotions and thoughts for us both. How in the hell could this have happened? Why now after all this time? What did we do differently? The only conclusion I could come up with was our six months apart. That somehow during that time my sperm must have been bouncing around down there just begging to get out. Surely they must have transformed into some mutant super sperm just waiting to burst their way inside an egg. This was seriously the explanation we went with. It wasn't until her first check up that we discovered that we were wrong. Dead wrong.

Joney has a rare blood type. AB negative to be exact. She is also RH negative. This may all seem a bit confusing...probably because it is. I'll try to explain a little better. Because of this, if Joney becomes pregnant and the baby's blood type is RH positive, her body will start to create antibodies to destroy it. They see the unborn child as an infection or a virus. These antibodies will then attack the babies red blood cells. This of course leads to all kinds of heartbreaking results. There is of course a ton of information and explanations that come with this. Unless I was sitting right next to a doctor, I wouldn't be able to describe it to you. It's extremely complicated and confusing to us. We still don't fully understand it ourselves. Basically in a nut shell, Joney's and my blood don't mix. If a baby is conceived, it's usually pushed out of the body and written off as a period or light spotting. Up till that day in the doctor's office, that was our life. I should have asked more questions. We both should have.

The doctor informed us that Joney needed some blood work done. Then, in a few days they would do it again to see where her levels were at. After 3 months she would then be given a rhoGAM shot. This would help her body from fighting off the baby. We took it with stride really. Went threw the motions like every other pregnant couple. Morning sickness, weird cravings, awkward sex. The whole nine. Nine months later our son arrived. We breathed a sigh of relief and just kept on moving forward. He was as healthy as could be and just an utter joy to have in our lives. It was when our son turned 3 that we decided to have another baby. We were planning on getting married in September and planned on starting on our honeymoon. Try we did. Then tried some more. We kept running that steeplechase hoping to beat out the odds.

Back to the starting line.

Uneducated on our true problem, we started blaming everything again. The lube must have had spermicide in it. The position we were using was forcing the sperm to flow out before it could go anywhere. I wasn’t fucking her deep enough. All kinds of shit. You'll blame crazy things when you're trying hard to have another child. We just kept on trying. We bought ovulation tests. Downloaded special apps to our iPods that told us the perfect days to conceive. We did it all. Before we knew it, 3 years had passed. Our son is now 6. We have pretty much given up all hopes on him having a lil' baby brother or sister. We just embraced it. Dealt with it. Moved on.
To be continued...
Tags:
Views: 1370