Clearing the Hurdles: Our Struggle To Conceive a Child (Part One) 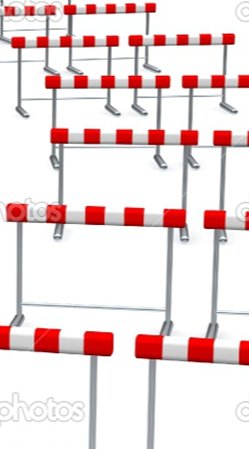 Hurdles track | Stock Photo © Jiri Moucka #1964668
My wife and I have been together for a little over eleven years now. In that time, we have had our ups and downs. A lot more downs then ups, to be honest. One of our constant struggles is the inability to get pregnant. Over the course of eleven years, we have had our fair share of heartache, near death experiences, and an unbelievable miracle that has has now become my lil' six year old whirlwind of energy. Even so, we still wish it was easier on us to conceive a child.

"The greatest part of being a woman, can also be the worst. There is no greater pain then the loss of a child you never had the chance to meet."

So, when my wife and I first met... it wasn't exactly a good time for me. I was traveling the country and had recently landed in Missouri, with a girl I met in Yellowstone National Park. Stay with me here... because it is going to get bumpy. I came to Missouri so this girl could be closer to her parents. You see, while in Yellowstone, this girl approached me and said that she was pregnant. I wasn't 100% sure it was mine, but to me it didn't matter. This girl had been my shadow for the past eight months. We were sort of friends and I tried to help her out any way that I could. So instead of being a dick and fleeing the scene, I decided to drop everything I was doing and move closer to her family as she went through the pregnancy. Needless to say, her parents hated my ass. Regardless, I landed a job at a Wal-Mart, and started the process of what I felt needed to be done. I found an apartment, I started a savings account and I was getting shit done (so to speak).

Towards the end though, it was becoming clear to me. The picture in my head was not the same as hers. Either she was scared or her parents got to her. Either way, by the forth month, she had moved in with her sister and I had slowly become the bad guy in everyone's eyes. I didn't care though. I just kept doing what needed to be done. Buying baby cloths with one paycheck and a crib and changing table with the next. I was going to be the “Dad,” no matter what!

I was looking for baby shoes, when I spotted her. Have you ever looked at someone and just knew that was the person who you would spend the rest of your life with? Me neither. I knew I had to get her, though. I had to make her mine.

With a clever phrase, I would sweep her off her feet and start our long journey as a couple. I believe what I said to my future wife was this... I was bouncing a huge ball, from one of those pits you see near the toys around summer time. She caught my eye and I walked slowly towards her. She looked at me and I knew it was time to lay on the charm.

“You know. I'm thinking about opening a kids play room. You know. A place where kids can just go nuts. Maybe I'll fill the whole place with these big rubber balls. Maybe I'll call it 'Jay's big sweaty balls'? Do you think Mom's would be cool with that?”

Yeah, I was a bit of a douche back then, but hey man it worked, somehow! Thus it started. It was perfect. Well at least until I told her about my unborn child, then things got a little weird.

The battle for love and affection

When I told her the story, she seemed okay with it. However when the two meet for the first time, it wasn't exactly tea and crumpets. Of course, they instantly hated each other. Even though me and... let's call her “Lana” for now... okay? So, even though me and “Lana” were never really together, she seemed jealous of Joney (my future wife) The same could be said for Joney towards “Lana”. After that, there was this battle between the two that could not be seen by a normal human. Unknown to me at the time, Joney wished she could be the one who was having my child. It seems weird I know, but love makes you think and do crazy things. So after a month or two, Joney told me she was late. Of course I beat myself up over it. I was quickly becoming one of those douche bags you see on 'Maury'. The type of guy who has numerous kids with different women. I didn't want to be that guy. I was a mess of emotions, but I took it with stride. I would find a way to make it work. People could say I was acting foolishly. I should have worn protection. What in the fuck was I thinking? What the hell was I doing? I didn't know. I was just this ball of confusion and panic to be honest. Joney, on the other hand, seemed happy. She just really wanted to have my child. I know, it seriously comes off as creepy and weird, but she was in love. She was jealous. She hated “Lana” and vise versa. So it was devastating to her when she went into the bathroom, about 4 weeks into her pregnancy, and came out crying.

I didn’t even have to ask her what happened. I just stood there and looked at her. I felt empty. I didn't know what to say or do. I held her as she cried. She said that she just wanted to have a baby with me so bad. That she just wanted to be the one who I was looking out for. I still didn't know what to say. After she calmed down, I called the ER and told the lady on the phone that I believed my girlfriend just had a miscarriage. She advised me to drive over to the hospital ASAP and have Joney checked out. The experience was heart wrenching. There's really no sympathy from these doctors. You have to understand that they deal with this on a daily basis. Their bed side manner is gone. So when they walk into a room and basically tell you...
“Well yep...you were pregnant...but you know...you lost it sooooooo...there ya go.”

You may feel this dying need to smash them in the face. Please don't. However please do ask questions, because we didn't. We had no idea what caused it. None. We were just left with the hard cold fact that she had a miscarriage. There were no handing out of pamphlets with some Doctor explaining the in and outs of the situation. Nope. She was looked at and prodded over and sent out the door. This only made it worse. When we returned home she cried for hours. It took her a good year, to finally get over it completely.

After my son was born, she showed no signs of jealousy towards “Lana”. She cared for my son, just as I did. She was great at it. She truly loved him. I could see why she so desperately wanted to be the one who was having my child, because she wanted this. She wanted us to share these moments together as a couple and not as some third wheel. I wanted that too, but I wanted to wait. We agreed and decided it was best to use protection from there on out. That lasted about a year or so. After that we didn't even bother with protection. It didn't become clear to me that something was wrong until about a year into it. We had no pregnancy scares. No missed periods. No nothing. This is when the questions started to rush in. Something wasn't right. There had to be a reason Joney wasn't getting pregnant. It's not like we were really trying, but still. Something was wrong. We just didn't know what.