by SneakersAndPearls, edited by Katelyn Published: May 30, 2013 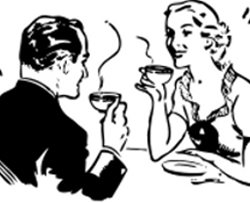 http://openclipart.org/detail/564/coffee-couple-by-johnny_automatic
Those that talk about sex outside of the bedroom are more likely to talk in the bedroom. Those that talk in the bedroom are more likely to have a satisfying sex life. However, there is a right way and a wrong way to open up.
Sometimes, hints don't do it. You know what I mean. You say something like, “perhaps we could try that new position later,” or “I wouldn't mind a long, slow, romantic evening.” You think that you've said enough. Surely your partner knows what you are talking about. However, what if your partner's communication sensor doesn't work that way and your subtle hints are taken as nothing more than you thinking out loud? It's vitally important to know how to communicate and how to listen about sexual needs in a way that both partners are heard. This includes both talking about sex and communicating during sex.

Good communication starts before a couple even hits the bedroom, both for steady couples and casual flings. Those that are comfortable talking about sexual topics might be more likely to ask their partner to use sexual protection, like condoms. Those that worry about talking sex, and their needs, tend to have a lot of anxiety that leads to less satisfaction in the bedroom, as they are not likely to speak up about what they need once in the act.

For long term couples suffering from anxiety about talking sex, it's important to remember that communication leads to greater satisfaction, but that doesn't mean they should rush into a conversation and blurt out whatever is on their minds. Those opening the line of communication need to be careful how they phrase their desires so that it doesn't sound like a complaint or criticism. Experts suggest waiting until a time when both people are calm and relaxed, and communicating in a way that is kind, not critical. However, those that want to start talking shouldn't wait so long that the issue festers in their hearts to the point that they have an explosion of anger. At the same time, a person that is opening communication for the first time needs to be aware of how their partner perceives information. For some people, a little hint is all it takes for them to, well, get the hint. For others, those that are speaking need to find a balance that is blunt but not critical.

Those that talk about sex outside of the bedroom are more likely to speak up during sex than those that are mum outside the bedroom. Communication during intercourse is just as important as communication beforehand. Those that communicate during sex tend to have higher sexual satisfaction, but those that communicate in non-verbal ways during sex have an even higher sexual satisfaction than those that use words. It seems counter-intuitive, but the theory is that non-verbal cues may seem like a safer way of signaling a partner than using words, especially if either one is nervous.

Of course, this doesn't mean that verbal communication shouldn't be used. It partially has to do with the couple's natural communication style. By using verbal communication, the couple can work out any extra issues they have, such as where each person likes to be touched, how to move and at what speed, and what positions are best for each partner. Proper communication can even decrease the instances when either partner feels the need to fake orgasms. Yes, some men fake, too.

In the end, communication is vitally important to a vibrant and healthy sex life. Open communication prevents irritations about the bedroom to take hold, leads to more satisfaction, and may lead down new roads. However, those that are starting the conversation need to learn how to talk in a way their partner will listen, and not to do so in a time of stress where it may be seen as an attack.
Tags:
Views: 3150
Related articles