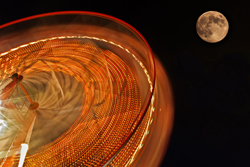 As the parent of a toddler, the greatest place on Earth right now for him seems to be the Magic Kingdom. While researching a trip to the so called “Happiest place on Earth” I started thinking about the name for one part within the theme park, Fantasy Land.
As sexual beings it is in our nature to have thoughts and fantasies beyond what we are currently doing in our sexual lives. Some of our fantasies are pretty tame, some should come with their own therapy sessions, but we all have these thoughts, yet many don’t admit to them at all.

Think about your personal Fantasy Land, how would it look to you? Would it be a dungeon so that you can live out your deepest and darkest fantasies? Perhaps a high end hotel so you feel luxurious as you have your fantasies come to life? Whatever your Fantasy Land looks like to you, it’s unique. I have found through discussing sex and sexuality with people that very few, if any people have similar, much less identical fantasy worlds. What drives one person wild is only somewhat interesting to another and that is alright. People having different sexual wants and needs makes for an interesting connection with one another.

So you have your Fantasy Land all laid out in your mind, the perfect place to make all of your sexual dreams come true. Who do you want to join you in that little land you’ve created in your mind? If you’re in a committed relationship, probably you want your significant other to join you, but perhaps not. When you have your partner join you in this fun little area, you have to realize that this won’t be their idealized version of Fantasy Land. At least it probably won’t be, like I said no two people’s ideas of their idealized Fantasy Land will be the same.

Fantasies are difficult things to bring up in a relationship I’ve found. Sometimes you’re both hot and eager to hear what the other dreams about, but a lot of the time your partner starts describing something you’ve never even thought of and you begin to feel a little insecure. It’s nothing against you and your partner more than likely isn’t meaning it that way, but the human ego still often takes a hit when your partner brings up a fantasy that perhaps doesn’t even include you. It doesn’t mean that they would ever act out these fantasies, but it is still something that can be a bitter pill to swallow. Acting out your fantasies is something you often dream about but when some of the opportunities arises you choose to let the moment pass. Because what if the reality doesn’t match up to the fantasy that you’ve held in your mind for such a long time?

This was recently the case with a friend of mine. He’s someone who’s always bragging about his sexual exploits and never fails to have a new and exciting story for his old married friend. So when we were having a drink a few weeks back he started talking about fantasies and how he was always trying to live out what he dreamed up. I chuckled as he rattled off what he wanted to and with whom. He finished and I realized he hadn’t mentioned a threesome, which in the past he had talked about, incessantly even. I brought it up to him and he got really quiet and ordered another round. He said that it had been a fantasy of his, but not any longer. I asked him if something had changed and he said he’d had a chance at it.

A girl he had been dating was pretty wild and uninhibited. He’d mentioned that he’d always wanted to have a threesome and she was all for it. They thought about it and figured out a friend of a friend who they both thought was attractive. They brought the girl home with them and everything was progressing just fine and they went through with it, but he said that he was disappointed at the end. It wasn’t what he’d been expecting or dreaming of for years, and even though it was good and something new, it didn’t stack up to what he’d been imaging for more than a decade. His girlfriend loved it, possibly because she didn’t have a decade’s worth of expectations built up.

So that brings me to my final question, should some things exist only in Fantasy Land? There are some fantasies that you definitely want to experience, and then there are some that are better if they existed only in your little Fantasy Land, where they are always perfect and never have the burden of having to have the reality of the fantasy live up to the expectation. So think about your own little Fantasy Land. Think about what rides and things are present within it. Consider sharing it with your partner but consider what should cross over to the real world, and what should stay in Fantasy Land?
Tags:
Views: 1846