The O Variations: Why Half of Everything You've Ever Learned About Your Vagina is WRONG 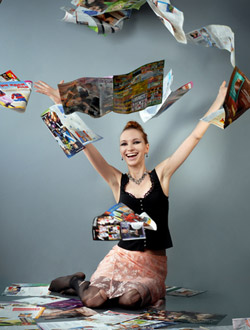 The vagina, while being the one-stop destination of choice for millions of people the world over, also bears the unfortunate distinction of being one of the most misunderstood areas of the human body, from makeup to function.

The Episode of Mythbusters Jamie and Adam Will Never Produce

The vagina, that sweet tunnel of joy, has been the focus of a wealth of myths over the ages - partly due to the fact that it's rather hard to get a really close look at (even their owners rarely see them in all their glory, and even then, it's because of visual tools like mirrors or video cameras), and partly due to the fact that most of the "mythters" who've been muttering are men who haven't got their own vagina to give them a reality check. It's no wonder, therefore, that nobody really gets a feel for the real truths, even after playing with va-jay-jays for years. So, as a pub(l)ic service, we at EdenFantasys are pleased to offer you our very own version of The Vagina Mythbusters.

Myth #1: There’s no such thing as different types of orgasms.

Just one road to pleasure? Whoever made this statement clearly has never had one. The truth is that most females can experience more than just one type of orgasms. Clitoral orgasms, which are the easiest to achieve, occur when stimulation (such as stroking, licking, or vibration) is directed towards the clitoris and surrounding tissue. Given that the clit has the largest number of nerve endings per square inch of any part of the anatomy (yes, even more than the penis), it's no surprise that this would be the easiest route to pleasure. However, there are more ways to get there than just the superhighway!

Another way to orgasm is through G-spot stimulation. While science still treats the g-spot with a deal of skepticism and controversy, the sexerati know that finding and working this spot creates a whole different set of orgasmic sensations, and shouldn't be an overlooked side road. Can’t seem to find it? The G-spot is located inside the vagina, behind the pubic bone. Most claim that this spot feels spongy and rough, but sometimes it only shows up after some arousal has already taken place, so you may want to spend some extra time playing everywhere else before you make the dive in to find the buried treasure. The g-spot responds well to various levels of pressure and vibration, so arming yourself with your hands, toys that are specifically engineered (read: curved) to hit the g-spot, and a few fun vibrators (or the fantastic Pinocchio-shaped attachment made for your Hitachi Magic Wand) can help you explore all that there is to offer.

Nipple play can cause wonderful orgasms for some women; science is undecided on how exactly that happens, but there are enough nerve endings in the nipples that cross over to the other sexual organs, as well as triggering the sexual response areas of the brain to give the concept of nipple orgasms the scientific stamp of approval. Other women find that stimulation of other parts of their bodies can bring about orgasms (or even near-orgasms); so with all of that information, you'll hopefully never wonder if the orgasm that you (or your partner) is having is a real one!

Myth #2: Only some women are multi-orgasmic.

Oddly enough, there are bunches of women who are multi-orgasmic; however, many of us who don't experience multiple orgasms bemoan the problem, blaming it on the fact that we're just "not wired correctly". Take heart! Most of us grow up getting off in only one way, if at all; often, we masturbate to the point of orgasm, then stop. Multiple orgasms can be as simple to get as varying the type of stimulation, and carrying on for longer than we usually allow ourselves to! I don't know whether it's a scientific fact or not, but most women I know who had single orgasms and then found the trick to having multiples discovered their ability to do so in their early- to mid-30's. It may be a case of taking more responsibility and joy for our sexual responses, or having more experience with our own bodies, or having more experienced lovers - or maybe that old saw about women's sexual peak in their 30s is actually true. Either way, multiple orgasms aren't the holy grail, hidden away with only a few lucky treasure hunters ever finding it (and surrounded by conspiracy theories) - they're far easier to find (and besides, who ever had that much fun after finding the holy grail?).

If this myth were true, no one would be playing with their fingers or sex toys. Where’s the fun in that? Listen up - masturbation is one of the best activities you could ever indulge in. Do it once a day, twice a day - however often you want! The reason why many think it can desensitize the clitoris is because it can often become routine. If you do the same thing every single time - finger yourself the same exact way, using the same silver bullet vibe on the same square centimeter of skin - then yes, of course you may get bored. Even worse, you may train your body to only respond to those particular sensations, and only orgasm when the magic combination is used (which can be difficult if you want to have sex in various different positions, or you can't get off your usual way). Try varying up what you're doing - stroke the sides of the clit instead of the hood, slip a few fingers into your vagina while you're doing it, grab a vibrator and buzz away, or anything else that feels good. By combining new sensations with the tried-and-true, you can remind your body that it can find a wide range of touches pleasurable, and reinvigorate your ability to come!

Myth #4: If you can’t achieve orgasm via intercourse, something is wrong with you.

The most common misconception is that if you have a penis inside your vagina, then orgasm should be immediate. If only it were that simple. Sorry, our genitalia has a mind of its own. Ask any woman and most will admit that they usually need to have some clitoral or g-spot stimulation beyond the "ol' in and out" in order to hit a high C note in the symphony. Need some additional motivation? Kegel exercises may also do the trick! To do this, squeeze your pelvic muscles as if you're trying to stop your urine stream, or squeeze a finger that is inside your vagina - you can hold it, then release, then squeeze again, over and over, twenty or more times in a session. You can do your Kegel exercises anytime - sitting on the bus, at work, in the shower, or even on a date (it also feels great when you're a little turned on). When you're having sex, you can squeeze your PC muscles as a way to get more physically aroused, during penetration, or at the time of orgasm (women who ejaculate say that their Kegel exercises are of major importance when it comes time to squirt!). Your partner will enjoy your grip on their fingers or penis, and you'll be able to feel more of what they're doing - what's not to love?

Sex toys rarely ever sour any sexual activity. If anything, it improves the experience. First of all, toys take you out of your comfort zone and allow you to experiment with different sensations. Most women explore their bodies with these orgasmic devices to find what they like and dislike. As a result, you know exactly what turns you on when engaging in sex or other activities. What’s more, it can also enhance the real thing. Have you ever gotten tired of the same old positions? Need a new type of foreplay? Adding a dildo or vibrating cock ring can intensify orgasms, all while changing the routine. Don’t you dare think of putting your favorites away - they will never disappoint!
Credits:
Tags:
Views: 1717