Ragged Glory: The Rise and Fall of the Noble Stag 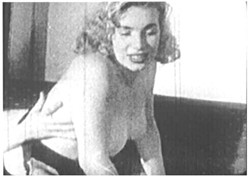 In London during the summer of 1894, Thomas Edison unveiled the wonders of motion pictures with his Kinetoscope. The earliest footage included horses galloping with a fire engine in tow, some doofus sneezing, and even Annebelle Whitford’s spicy Serpentine Dance. This was brand new; it didn’t take much to impress the rubes. So when nudity and sexuality became subjects of this new medium, the rubes went nuts. Photographs were amazing enough, but actually watching naked people move, frolic, and cavort?

Now that was entirely too cool.

America’s self-appointed guardians of decency had these new moving pictures under a magnifying glass from their first screenings. The local censorship boards that sprung up throughout America in the 1900s and the rigid, inflexible restriction of film content mandated by the Hays Code, established in 1930, ensured there was never a chance that sexually explicit cinema was going to be readily available to the public at large. Public outrage and the likelihood of getting busted on a morals charge meant that the makers of stags were forced to distribute their products through underground channels from the moment their footage was in the can.

The Meat Shots Heard Round the World

Stags had a typical running time of 10 to 12 minutes, were almost always silent, even after the advent of sound in movies, and the filmmakers usually didn’t bother to give titles to their films. Viewers wouldn’t find recognizable performers from theater or early mainstream movie releases on view; as far as the performers involved, stags were strictly amateur night. That was part of their considerable charm. The giggles, blushes, and awkwardness of the actresses were real. Their product is remarkably similar to today’s amateur sex videos in that regard. Viewers never got anything slick and polished from the stags. Prostitutes were often recruited as talent, and it was common for performers to wear masks during filming.

In addition to providing a talent pool, brothels also provided a venue for stag screenings. The stags were good for business; they kept the clients entertained while they waited for an available lady, and they’d get good and randy in the process. By the 1920s, most brothels in America and Europe had well-stocked stag libraries. Stag producers were very aware of this, and often riffed on that in their films. The conclusion of Le Télègraphiste (ca. 1921) featured big, bold text that read: “After seeing this picture, rush over to some nice girl and get taken care of.” Many viewers didn’t need much more of a nudge than that.

Early stags often featured striptease artists who recreated their routines for the camera. The most prominent example of this is the 1896 film Fatima’s Coochie-Coochie Dance, featuring famed burlesque artist Fatima (a.k.a. Little Egypt) performing the dance she made famous at the 1893 Chicago World’s Fair. When burlesque houses relied more heavily on their striptease performers than their comics and jugglers to fill the seats, exporting the acts to stag films seemed like a reasonable way to make a few more bucks.

The earliest known surviving hardcore stag film is the 1907 Argentinean import El Sartorio. A three-way lesbian frolic in a river is interrupted by Satan himself, who abducts one of the nymphs and whisks her away for his carnal amusement. Astonished and delighted viewers were treated to explicit footage of oral sex, penetration, and finally, a big glob of ejaculate dripping out of the woman’s vagina at the film’s conclusion.

El Sartorio is demonstrative of what would become a major stag convention—the absence of ‘come shots’. For stag viewers, the “meat shot”—close-up footage of penetration—was the glorious moment of truth. This was the image that really made the stag connoisseur’s monkey jump, and stag filmmakers were more than willing to provide their loyal viewers with plenty of them.

American filmmakers entered the stag arena with 1915’s A Free Ride. Like El Sartorio, the film took the flimsiest of set-ups (a man and a woman go for a rollicking ride in the country in one of those newfangled horseless carriages), then launched into the hardcore action.

The Virgin With the Hot Pants (ca. 1923) exemplifies another common quality of the stag oeuvre—fractured narratives and continuity that rendered the hardcore scenes nigh incoherent. The film presents front and rear views of spread labia, cunnilingus, and penetration with a beer bottle. Only the intertitles give anything resembling context for the activity onscreen. Not that anybody cared. The viewers got the nudity and explicit sex that they bargained for, and that was all that mattered. If they had wanted art, they would have gone to a museum. Filmmakers knew this and never troubled themselves with shot-to-shot continuity. It was common for stags to have footage spliced into the reels from older stag flicks. Copyright and intellectual property litigation wasn’t something stag creators had to worry about, so why the hell not? None of the viewers gave a rat’s ass that the brunette had suddenly become a blonde between shots. As long as they got their recommended USDA daily allowance of meat shots, they went home happy.

Stags almost never had credits; producers and performers didn’t want to risk drawing the attention of law enforcement or bearing the social stigma of being associated with stags. Yet, A Free Ride had them, though they were a bit skewed. The opening intertitles proudly proclaimed:

“DIRECTED BY A. WISE GUY
PHOTOGRAPHED BY WILL B. HARD
TITLES BY WILL SHE”

Calling this sophomoric gives it too much credit, but give the filmmakers credit for having a spirit of fun. On the Beach (a.k.a. Getting His Goat ca. 1922) integrated ribald humor into its plotline. A roving gentleman tries to seduce three beach bunnies who finally succumb to his advances on one condition: all of the sex will be performed through a hole in a fence. The gentleman agrees and thoroughly enjoys himself, only to find that those rascally nymphs have set him up, and he’s been ravishing a goat the whole time.

When animators got into the stag business, they brought their outré visual and comedic sensibilities with them. Buried Treasure (ca. 1928) was a film that several of the era’s top animators created as a birthday present for cartoonist and animator Windsor McKay, creator of Little Nemo and Gertie the Dinosaur. In this picture, the hapless Everready Hardon’s penis detaches and runs off on its own, engaging in a wild series of misadventures including accidentally plunging itself into a man’s ass and having a really unfortunate run-in with a cactus. “The Penis With A Mind of Its Own” was a recurring riff in animated stags, as was wildly exaggerated genitalia that had to be coiled or slung over its owner’s shoulder to prevent the poor guy from tripping over it.

As far as acting, stags were the province of amateurs, prostitutes, and strippers; though throughout the 20th century, rumors flew about famous actors and actresses who bore the dirty little secret of having performed in stags prior to their rise to fame. Most of these urban legends don’t have any truth to them. For example, claims that Barbara Streisand starred in a stag film are pretty dubious—the alleged reel features a young woman with a prominent nose, but the quality of the film is so dismal that there’s no way of telling who’s onscreen. Marilyn Monroe is often named in these rumors—the truth is that a lookalike named Arline Hunter, a.k.a. “the poor man’s Marilyn Monroe” stars in most of the reels that get singled out, most notably The Apple-Knockers and the Coke Bottle. So you can safely consign most of these stories to the wishful thinking file.

Marilyn Monroe was widely known throughout Hollywood for her easy willingness to trade sex for favors and at least two stags known to have featured her have surfaced. One, ca. 1948, presents a very young Marilyn gleefully engaging in hardcore action on a couch. Another film, thought to date from the mid-1950s, features Marilyn in hardcore action. The only known print sold to a collector for $1.5 million in 2008. Hardcore sex reels featuring her with Bobby Kennedy, as well as one purportedly of her servicing Frank Sinatra, are said to have been shot, but nobody knows if any prints survive. NOTHING exists for it—titles weren’t given and certainly no code number—no stag producer would ever submit films to the Hays Office. Around the Net, referring it to as “Marilyn Monroe 1948 Stag” is the easiest way to get linked to a downloadable file.

Additionally, a gay stag from the late 1940s purportedly shows a young Chuck Connors going down on a sailor. Doesn’t appear to be any footage or stills on the Net from any of the stags purported to be of Connors. While not conclusive, the general consensus holds that it’s Connors in the reel. Hollywood Babylon scandalmonger Kenneth Anger claims that Joan Crawford did several stags during the 1920s while she worked in a cathouse. Bosom Buddies is the most famous, featuring extended lesbian action.

Of course, the better-known striptease artists were still exporting their acts to the stags. Malibu Mermaid features Adele Coleman letting the pounding surf do most of the work for her. Sally Rand, self-titled Queen of Burlesque, had many of her stage routines enshrined on celluloid in the 1930s. Betty Page circulated on many a reel in shorts that are tame by today’s standards but still showcased the raw sensuality that would ignite the ardor of a hardcore fan base that would grow with each passing decade.

The steady trickle of stags prior to the 1920s became a raging torrent during that decade thanks chiefly to the introduction of inexpensive 16mm movie cameras and film by Kodak. This innovation spurred a groundswell of amateur filmmakers and made stag production cheaper and easier than ever before.

Clandestine viewings in the basements of private clubs, lodges, and frat houses became common during this decade. If you knew the right folks, you could hire an exhibitor who’d show up with a projector, a screen, and a library of stag reels. For $50 to $100, you and your buddies would be treated to an evening of grainy, badly shot porno. It was a fairly safe evening of entertainment; as long as these flicks were kept out of view of women and children, law enforcement usually turned a blind eye to stag parties. Watching stags with a group of friends had become a rite of passage and a weirdly venerated social ritual.

By the 1950s, stags had spawned an infant home video market. In the back pages of lurid, salacious pulp magazines, ads from outfits like The Hollywood Color Club and The Movie Club Guild of Burbank would entice readers with “frisky, sophisticated” entertainment. That basically meant that for five or six bucks, you could get a stag reel mailed to you in the perennial plain brown wrapper. Hell, for another five or six bucks, most of these vendors would set you up with a cheapo projector, too. Sure, it wasn’t as sleek and streamlined as the VCR setups awaiting a quarter of a century down the road, but now anyone could build a stag film collection and enjoy them with friends in their own rumpus room.