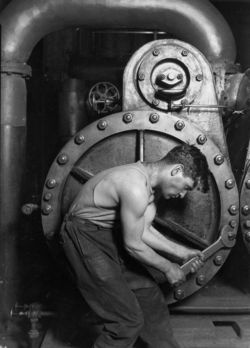 Even today, when we men are encouraged, seemingly mandated, to embrace sensitivity and nurture our feminine sides, the penis defines in large part what it means to be a man. It defines our masculinity biologically...right?

Casualty of the Battle of the Sexes

Even today, when we men are encouraged, seemingly mandated, to embrace sensitivity and nurture our feminine sides, the penis defines in large part what it means to be a man. It defines our masculinity biologically. Our psychological make-up is as much nature as nurture, and nature equipped us with the bait-and-tackle package that supplies those delightful hormones which fuel us with aggression, assertiveness, and bravado—qualities which have been regarded as inherently male for millennia.

Now we're caught between our dick-bestowed inclination toward swagger and the anxieties that go along with owning this equipment. On the physical side, there's no better primal terror for men than performance anxiety. In the social arena, we can't talk honestly about the penis, except to exploit it for a cheap laugh in sex farces or to discuss fears of impotence, thus revealing our vulnerable side, a most laudable activity in a PC society. How did our dicks and masculinity become so devalued? Where do we go from here? Let's try to answer those and present a couple of modest proposals to allow the penis to stand proud again.

During our teenage years, we discover all the thrills and sphincter-puckering terror that accompanies owning a penis. Our elders do their best to guide us through the changes. I still remember the reassuring line from a sex-ed tract, "It is NOT a bone. It will not break." We discover how great masturbation is, especially when accompanied by the magazines from under Dad's bed. Which must be replaced with the greatest of care to escape the wrath of Dad the Merciless. Girls, formerly bearers of cooties (insidious parasites that can only be killed by the horrifically painful Cootie Shot), have magically transformed into enthralling creatures that make our newly sentient dicks respond in manners delightful, frightening, and sometimes hideously embarrassingly. Having a woodoid while shielded by your desk is cool. Popping one in the lunch line is seriously bad mojo.

We learn quickly that external genitalia can be a nightmare from Hell. Our dicks are all too exposed to the slings and arrows of outrageous fortune and taking a hard shot to the nuts Really. Fucking. Hurts. It's a whole new dimension of pain, which is why none of us can help cringing when America's Funniest Videos runs their legally mandated hit to the crotch clip of the week.

With their internal genitalia, women also enjoy a huge advantage in the social arena - we can never be certain when they're turned on (might as well stop kidding yourself, Casanova). With us, it's all too obvious. If you're working your magic on us, our dicks will rise to the occasion, no matter how vividly we imagine leathery old nuns in a lesbian three-way.

We do have a hard time talking openly about our sexuality, and we've got to shoulder our fair share of the blame for that. Talking about sexual conquests among close friends is acceptable, but demonstrating too much interest in dicks, or worse, asking former varsity star Flash Tuggman for his opinion on the fluctuating state of male gender identity in contemporary society will provoke uneasy, dismissive laughter at best, and a steely, withering glare at worst. Those topics invoke the specter of homoeroticism, and as enlightened as we'd like to believe we are, we're still conditioned to respond to even the vaguest flicker of such feelings with terror and mortification.

Pop culture used to give the penis a fair shake. Blues and rock were full of sexuality, attitude, and blatant double-entendres; "rock and roll" is an old blues euphemism for sex, and the acts of the 60's and 70's projected sex and machismo. Nowadays, top forty radio is rife with angsty, metal kids shrieking about how insecure they are. Only modern rappers with tracks too scatological to get airplay keep the dick braggadocio tradition alive, which would be more heartening if they dialed down the vehement misogyny.

Hollywood fully embraced female nudity the nanosecond they dumped the Hays Code, but penis sightings on the silver screen have been unusual until the past couple of years. Even so, that dick better be flaccid or producers will stare an NC-17 in the face, and that flaccid dick will typically be played for laughs, as per Bruno and our glut of sex comedies. Audiences are short-shrifted as far as getting thoughtful films about mens' sexual awakenings. Moviegoers of the 60's got The Graduate. We get Sex Drive.

We're conditioned by society, the media, and the DVDs hidden in the sock drawer to believe that every woman hungers for a man who's hung like a bear, and even when we know that affection, foreplay, and a strong emotional connection are more important in turning a woman on, a part of us still buys into the myth. Four inches is more than enough to do the job, but we're still quick to give in to feelings of inadequacy. Type "penis" into Google and what results will you be buried with? Penis enlargement.

Then there's performance anxiety. Women can feign arousal, but we don't have that escape hatch, and that feeds our primal terror. Intellectually, we know that it happens to all of us at some time, for a variety of reasons, and it doesn't make us any less of a man. Doesn't matter. We're so terrified of having an unresponsive penis that we'll eagerly empty our pockets for any snake oil salesman who promises to turn us into a sexual juggernaut. Hell, the ads say that there's a danger of an erection lasting four fucking hours! It's gotta work! Instead of talking it over with our partner, or, Heaven forbid, taking the time to enjoy the slow, gentle pleasures of the flesh that don't involve penetration, we let our fear rule us and lunge for the quick fix.

"Your fantasies bore us - ours disgust you" —Bill Maher.

We've reached a new double standard regarding open discussion of our sexuality - it's cool when women do it and completely revolting when we do. It was to be expected. Ever since Thag discovered that the round thing he chipped out of a rock would come in handy, women have been de facto serfs in patriarchal societies. Even after a few decades of consciousness-raising, women still have a much tougher struggle in the social, economic, and political arenas than men do. It was inevitable that the pendulum would swing the other way with a vengeance - there was going to be some payback.

Our language reflects the prejudice against the penis. Being a "dick" or a "prick" labels you as an obnoxious asshole, and if you're told that you're "thinking with your dick", you haven't been complemented on your candlepower or your priorities. 40 Almost all of the monikers in our lexicon that derive from genitalia are derogatory, and with that influence on thought and perception, breaking away from reinforced stereotypes is a Herculean task.

Discussing sexuality has been reduced to a zero-sum game. Honest discourse can be contentious and society values deploying any tortured verbal gymnastics necessary to avoid giving offense to anybody. So we hold back. We don't want to gross you out or look like pigs; the reaction's unpleasant enough to make lies by omission palatable and there doesn't seem to be any percentage in being 100% forthright. Put us in a secluded corner of a sports bar with no woman in a 50 meter range and we'll open up. Amongst the teeming throngs of the general public, most of us know to keep our mouth shut.

Can't We At Least Pretend We're Trying To Get Along?

If we're going to arrive at a place where male sexuality isn't devalued and the dick isn't derided, we're going to have to learn to meet in the middle. Both sides have to allow open and honest sex talk without eye-rolling, snorts of disdainful laughter, and going into a tizzy over the slightest thing that rankles our sensibilities. There's a lot of ground where never the 'twain will meet. That's fine. Women will never entirely understand us, no matter what Cosmo says, and we'll always find some aspects of women to be utterly unfathomable. We're different. Let's celebrate the differences again instead of getting worked up over them. It'll take time, effort, and heated argument, but we can move from a cultural attitude of the penis as something that "has its uses" to a place where the dick is a beloved instrument of pleasure and proud symbol of manhood. Let's dump the angst and go about our business with a strut and swagger, proud owners of our equipment. It's time to feel good about being the cock of the walk again.
Tags:
Views: 1165
Related articles