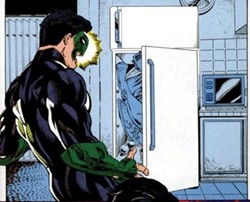 Warner Bros.
The mid-1980’s: while movement toward intelligent storytelling and mature treatment of sexuality was proceeding at a satisfying pace from independent creators, the mainstream’s efforts were typically ham-handed and mawkish. Let’s see what happened when the big publishers introduced sexual diversity into their imaginary worlds.

The mainstream’s first forays into addressing homosexuality could politely be called “fucking embarrassing.” In 1987, DC’s Millennium mini-series introduced Extrano, the world’s first openly gay superhero. Noble idea; deplorable execution. Extrano was a caricature as repulsive as a blackfaced performer in a minstrel show. 1507

The first truly notable coming out in the mainstream was Northstar’s, a Marvel superhero envisioned as gay when created by John Byrne in 1979, but Editor-In-Chief Jim Shooter had banned the depiction of gay and lesbian characters in Marvel’s titles. Northstar’s homosexuality remained an open secret among fandom until Alpha Flight #106 in 1992. In that filler issue, Northstar came out of the closet in an atrociously written melodrama. Still, the issue generated major positive ink among outlets such as The New York Times. Marvel’s contemporary gay-inclusive universe owes much to the positive reaction to the Northstar story.

Gay and lesbian characters are fairly common at DC and Marvel with credible characterizations thanks to an influx of GLBT creators. Alan Heinberg’s Hulkling and Wiccan, gay teens created for his Young Avengers title, make frequent appearances throughout the Marvel Universe. Batwoman’s now the first lesbian to headline her own mainstream series. Ironic considering that she was created in the 1950’s to be Batman’s love interest and deflect allegations that Batman and Robin were gay lovers. 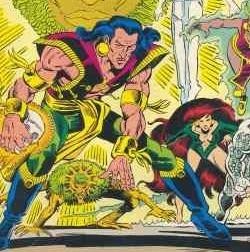 The sexual content of typical superhero comics is as risqué as prime-time television’s nowadays. Publishers cater to their core demographic of males from their teens to 30’s with loads of gratuitous titillation, and they’ve capably demonstrated that sexual content doesn’t necessarily equate to mature content.

Typically, when publishers push the sexual envelope, the results yield more goofy, pathetic titillation than intelligent character development. In 1980, Emma Frost’s stunning ensemble dragged masturbatory fantasy material to new depths. Marvel raised eyebrows and drew ire from longtime readers with the tacky oral sex scene from Avengers #71. Weirdly, many fans get their backs up when artists play fair with the hyper-sexualization of their heroes. When Justice Society of America #7 hit the shelves sporting a well-endowed Citizen Steel on the cover, readers who had no problems with Power Girl’s peek-a-boo top found themselves moved to righteous indignation, promptly crapping up fansites with a plethora of tragically pathetic protests. 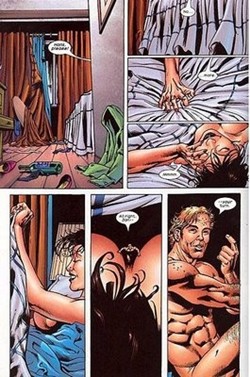 Women in Refrigerators: The Twisted Aesthetic of Hyper-Violent Misogyny

Women In Refrigerators (WiR) refers to plot devices involving the murder, rape, torture, and other abuse of women to advance the storyline of the male protagonist. The term comes from 1994’s Green Lantern #54, in which Green Lantern’s lover is murdered, dismembered, and stuffed into a refrigerator. The controversy and protest the scene drew wasn’t enough to prevent creators from repeating the motif with nauseating frequency.

After the issue’s publication, Gail Simone compiled and published a list of women in comics who had been sadistically victimized. Simone didn’t editorialize, letting the list speak for itself. WiR remains a hot-button issue for good reason; publishers still market explicit abuse of women as entertainment.

The readership has to shoulder some of the blame, too. These titles sold quite well; Identity Crisis moved over 100,000 copies of each issue. Unless fans start voting with their wallets, WiR will continue to remain an enduring phenomenon.

The Mainstream Gets Vertigo

In 1993, DC comics gave editor Karen Berger the green light to indulge her indie sensibility with their new Vertigo imprint. Berger’s titles, including Swamp Thing and Hellblazer, garnered acclaim from critics and fans alike during the 1980’s with storylines more edgy and mature than the work that typified contemporary superhero fare. The Vertigo imprint gave her the freedom to cultivate new talent and let them cut loose.

Berger’s triumph came with Neil Gaiman’s Sandman, a work featuring sensuality, lyricism, and literacy far beyond what American comic readers were accustomed to. It was a huge hit that not only won over comic fans, but also women from their late teens to early middle age who typically disdained comics. Berger made the industry aware that quality material could reach a wide female audience.

Other notable Vertigo books, available in collected editions, include Grant Morrison’s Invisibles, a sexually charged psychedelic journey into conspiracy, esoterica, and arcane magical practices. Vertigo’s longest running series, Hellblazer, chronicles the life and times of John Constantine, occultist and utter bastard. Hellblazer’s been an intelligent, entertaining ride into the dark side of contemporary Britain, spiced with mordant humor and a healthy libido. Then there’s Preacher. Brainchild of Garth Ennis and Steve Dillon, it’s loaded with graphic violence and inventively depraved sexual content guaranteed to offend any but the most freewheeling libertine. Look past that and you’ll be treated to a story that’s often quite insightful and moving.

The contemporary independent comics scene features as much diversity of content and artistic style as can be found in any medium, and creators have an outlet for undiluted artistic expression. The financial rewards are small, but their visions remain unsullied by corporate marketing teams.

Clowes’ Eightball featured short stories brimming with anger, dread, jaded cynicism, and often startling depravity. Clowes’ work was also full of sharp observations and wickedly barbed humor. Ellen Forney’s comics most often found homes in magazines such as Out, The Village Voice, and Ms. Forney’s Lust: Kinky Online Personal Ads From Seattle’s The Stranger features genuine WTF personals graced with her artistic embellishment. Another critical favorite working in the anthology format is Sophie Crumb (yes, HIS daughter), whose semi-autobiographical musings in Belly Button Comix gained her a Harvey Award at the very outset of her career.

For the finest depiction of an omnisexual romance in comics, look no further than Terry Moore’s Strangers In Paradise. Moore won several industry awards and a GLAAD award for damned good reason. Julie Doucet’s autobiographical works Dirty Plotte and New York Diary garnered wide acclaim while shocking delicate sensibilities. When your book translates to 'Dirty Cunt', it shouldn’t come as a surprise when you’re called “Id with an ink bottle” by Entertainment Weekly. For a neo-Victorian aesthetic flavored with wrenching gore and vivid carnality, try Dame Darcy’s Meat Cake. Surrealism with libido and intellect, there’s nothing else like it.

Manga (comics from Japan), have contributed greatly in liberalizing the medium’s depiction of sexuality along with attracting a vast female audience to comics. Manga’s genre diversity and wealth of titles geared toward tween and teen girls help account for manga winning a 60% female readership demographic. Women in tend not to be hypersexualized, so they’re easier for women to identify with than the impossibly proportioned heroines populating American comics.

Manga still offers plenty of carnality for those who want it. Hentai (pornographic manga) has a large following – if you hear the term “tentacle rape” dropped, chances are that hentai’s the subject of the conversation. Mainstream titles, particularly those aimed at a male readership, have plenty of gratuitous sexual content, which falls under the rubric of “fan service.” The steamy lesbian sex romps of yuri are a prime example of fan service that runs the length of the book. Among women, yaoi’s become quite popular. Tales of homoerotic love created with a female audience in mind, yaoi’s a popular subgenre with a thriving fan base.

From its origin as a childrens’ medium, comics have progressed toward more explicit (and sometimes even more mature) depictions of sexuality. As the medium’s content continues to broaden from its staple of superheroes and diversity spreads through editorial and creative positions, comics will get closer to becoming a staple of the American cultural diet. The pace is glacial, but we’re getting there. In the meantime, there’s a plethora of fine work to enjoy – happy reading.
Tags:
Views: 997
Related articles