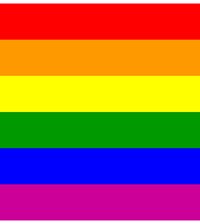 http://www.crwflags.com/fotw/flags/qq-rb.html
Coming out of the figurative closet tends to be a difficult path for many people. It’s not just working up the will to tell everyone else, but admitting it to yourself.

"Never be bullied into silence. Never allow yourself to be made a victim. Accept no one's definition of your life; define yourself."

I grew up in not just a religious home, but a very conservative and religious home. I had never been particularly interested in men, but forced myself into Lord knows how many relationships and “crushes” in the effort to seem normal to everyone else, all on a subconscious level. In 8th grade, even, I stood before my church congregation and said flat out that God doesn't like gay people. I look back on that little mini sermon I had to do and shudder a bit. Admitting it to myself, in high school, was a difficult task. I made myself ill for so long wondering about it.

Once I could admit it to myself, though, came the task of admitting it to a parent. This only helped lengthen the period of time where I was constantly ill, constantly upset. I had read too many horror stories that come with coming out to a conservative Christian family; the tales of anti-gay conversion therapy, and the horrors of what is done to people there. I, admittedly, psyched myself out with this idea, so convinced that I was going to be hated by my own family.

I finally convinced myself to do it. I had come home early from school, partially because I needed to do this and partially because I wasn't able to focus on school work, what with the panic attacks I was giving myself in pure horror. My mother was home, and I asked her if I could talk to her. It took me while to actually spit it out. I kept breaking into tears, and was shaking like a leaf. My mother looked down right concerned as I tried to spit this out. Was I pregnant? Was I admitting to some assault? I eventually spat it out.
“Mom, I’m lesbian.” She had this look of contemplation; no anger, though. “Well,” she replied. “If you are, you are. I love you all the same.” I thought I was going to cry again right there, and I was still shaking like crazy. At the fragile age of 16, I had overcome a horrible fear and told my first family member that I was gay!

But she was only the first. In fear, I had been told that telling my brother or father was a bad idea. Now, my brother proved fairly easy. He basically guessed within a few months of telling my mother. I have no idea how, but he figured it out on his own. Being of the same generation, and coming from some sort of intelligence, he just shrugged it off and didn't seem bothered. To this day, we sometimes girl watch together.

My dad, on the other hand, somehow, remained ignorant of this fact for 6 years. Even his best friend was able to figure it out pretty quick (asking my mom to verify, of course). My mother was intense on the fact that we MUST NOT tell him a single thing. Ever. Not until I was out of the house. This was irritating to me after a point, as I was bold enough, and comfortable enough, in my sexuality to be able to tell my father without effort. After 4 or so years, I just stopped being quiet about it. I made no actual effort to hide the fact that I was dating women, several of whom he met. However, he still remained utterly oblivious, and fairly homophobic to boot.

Finally, I had enough of ‘hiding’ myself for the sake of my mother. My next chance, I was just going to blurt it out, come what may. I had most of the family on my side. One day, late 2012, I was talking to him about gay rights and other such things. I eventually just blurt out “You know, I am lesbian.” He eyeballs me for a moment, completely dumb founded by this new information. It was only a few weeks before that he was telling my mom how proud he was that I was saving myself for the right man.
“Oh,” he replies. “Well. We love you anyway.” After that, he just wandered off. I heard from mom that he came to her, asking how long she’d known about it.
“Why didn't she trust me with that?” he asked, clearly heartbroken that I had ‘hid’ this from him for a solid 6 years. I was his precious baby girl and all.

The rest of the family was so easy to handle. I went on facebook, found an image that said HI, I’M LESBIAN, and posted it. Most of them liked it, or went “YEAH WE KNOW”, and that was that.

It took 8 years of my life to get through the entire process, from myself to everyone around me. But now, I’m out, I’m proud, and I can talk about my girlfriend at family functions without them giving me a look of ‘when the heck did that happen’. Mission accomplished.
Tags:
Views: 1774
Related articles