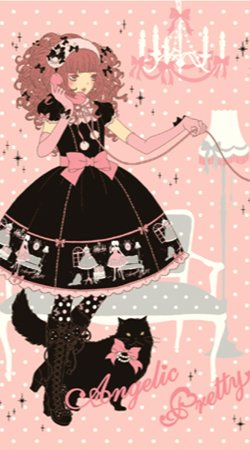 origamicupcake.com/2011/10/sweet-lolita-fashion-illustration-by-imai-kira/
In the minds of some girls, Lolitas should never have so much as a sexual thought. It's a common happening in the communities to even begin to think like this. Why? Are they right? Hell no!
Lolita is a fashion, originating in Japan, that tends to draw a lot of inspiration from Victorian fashion. Often time, the fashion of young girls, even. It is a very modest fashion. Your skirt (coupled with a petticoat under it), goes to or past your knees. Bloomers are, usually, a requirement. Your shoulders are covered, your collarbone is covered. Your legs are covered by either tights or socks (to the knee or over the knee). The modesty level of the fashion is through the roof. The fashion was even created to move away from the sexuality attributed to clothing that girls wore.

This, in the minds of some girls, means that Lolitas shouldn’t so much as think of sexual thought. It’s a common occurrence to see, both online and in certain communities off the web. I feel lucky to have found such a warm and accepting community where I live, but people like my girlfriend have not been so lucky.

My girlfriend came to me with a story last summer about this. She had been at an anime convention in Texas, and was watching the Lolitas, willing herself to go ask one for a photo. (She has a rather nice dress whose print I am, personally, rather attached to.) The girl, however, was keen on informing another girl that she was not allowed in the photo shoot. Why? This girl was rather pregnant. This proved that she was sexually active, and ‘Lolitas aren’t supposed to be sexually active’. This sounds like pure nonsense, of course. What does it matter if you happen to be sexually active? At the core of it, Lolita is just a fashion style. It’s clothing.

This comes up way too often for me to ever be comfortable. In a book written by one of the owners of the brand Baby, The Stars Shine Bright, the girl talks about how inappropriate it is for Lolitas to have sexual relationships. They’re supposed to be delicate dolls, untouched, and doing anything sexual would make one disgusting.

I could only express to my poor (slightly horrified) girlfriend, after her experience at the anime convention, that such talk was mostly nonsense dreamed up by people who are, more or less, completely bonkers.

Sexuality isn’t a bad thing for Lolitas. I sure wouldn’t be here on Eden if I wasn’t interested in sex. I’m not about to wear my dresses into bed (mostly for fear of ruining dresses that can cost several hundred dollars at a time), but sexuality as a Lolita isn’t bad. I feel insanely lucky to have the local community that I have. Most of them are dating people themselves, and are insanely liberal concerning so many other things. (It’s so nice to have a drink in my dresses!)

The fashion itself is not inherently sexual (nor will it ever be). Anyone who says any different needs to be taught better. Any Lolitas reading this: Don’t let people get you down. You rock your frills, and enjoy your sex life!
Tags:
Views: 1369