The Tale of a Lesbian Lolita 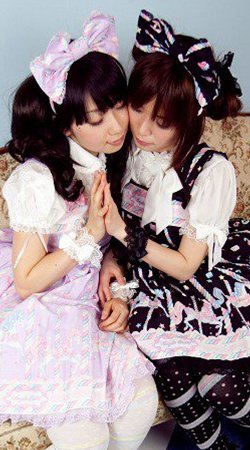 http://weheartit.com/entry/19209881
Being a Lolita is tricky enough. Combining an alternate sexuality with that can sometimes make your peers give you some pretty odd looks!
I have always lived in a fairly liberal area of the United States, and thus never had any significant issues with two major parts of my life being known by the public. One, being lesbian, and two, being a Lolita. Lolita is a pretty weird fashion to most people, so I do feel rather blessed that I live in an area where my adventures out in my frills aren’t met with any outrage, like I’ve heard elsewhere. Being lesbian, likewise, has never actually caused any reaction from the general public. I could be making out with my girlfriend in public and not really draw much of a response.

However, it’s when you start mixing the two that you start to come across some minor issues. I do feel blessed with an excellent Lolita community, but I’ve noticed things when you start talking about sexuality. Many of the girls have boyfriends, many of them bringing the boys to meets. They’re sweet guys, really. When the conversation of significant others comes up, it does tend to get awkward for me.

“Are you dating anyone?” new girls will ask. “Of course!” I’ll tell them. I love my girlfriend to the ends of the earth and love bragging about her. “Oh, is he cute?” He. Oh. They think I have a boyfriend. Cute. “No,” I explain to them. “I have a girlfriend!” From there, there’s silence. More timid girls will go utterly silent, feeling awkward with this new information. They’re not sure how to handle it. Am I a creeper? They don’t know. They only know stereotypes of lesbian women. All dykes and flannel shirts.

The bolder ones will pursue more information. “Girlfriend? You have a girlfriend?” This question always amuses me. They’re double checking that I’m not joking. That it isn’t just a friend who is a girl. Those kinds of things. “Of course,” I reply. I wasn’t kidding, after all. “So you’re lesbian?” I really don’t fit the stereotype they have in their minds. I’m girly, I’m wearing bows and pastels and god knows what else. “Yes,” I’ll reply. Of course I am.
The more accepting ones, the ones merely confused, will smile and ask if my girlfriend enjoys Lolita, if I’m going to bring her to a meet and if I’m going to dress her up. At that point, they actively want to know about me and meet my girlfriend- I enjoy being around these people. The others will just go quiet, a soft smile on their lips as they mentally try to process what in the world I was doing among them.

Sexuality is always a sticky issue in Lolita communities. Sex alone is a sticky subject, not even getting into alternative lifestyles. (The irony is not lost on me for that one, I promise.) Nearly every confessions community in Lolita will have anonymous posts saying "I’m lesbian and I’m scared to tell anyone." or "I like a girl in my community but I think everyone will hate me if I say anything."

It’s a sad fact. I’m a firm believer in being upfront about my sexuality when asked, however, I encourage every single girl to go ahead and tell others whatever they’re comfortable with. The path I’ve experienced has been certainly a tad awkward, I will admit. (But fitting into that silly stereotype for lesbians is boring. Bring on the bows!)
Tags:
Views: 3012