Sex is a moving target 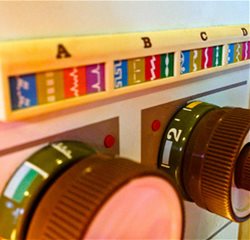 Dials by Flickr User JuditK
No matter how much we know ourselves or each other our sex lives are like sharks, they have to keep moving or they die. So we've got to be open to changing what we think about sex, especially when you're trying to keep a relationship going longer than a week.
When you're in a long term relationship sex can be a slippery concept. It's hard to nail down in one brain, much less two. It's hard to get a handle on it this week, much less over the span of years. Even as one night wears on it can come to a new place, a different use, a changed mindset.

That said, it's important to try. If you don't constantly recalibrate then it's all too easy for sex to become something that no one in the relationship wants. It's too easy to just not talk about it and, before you know it one partner has given up on ever having much fun and the other partner is confused as to why they're only doing it once a month.

My wife, in her days before our relationship, always thought of sex as essentially about power. She used her allure to gain power over men. It was all abut the chase, the seduction, the consummation and then it was boring, so on to the next one. Obviously, this doesn't translate well to a long term relationship, so continuing to have great sex has been an ongoing issue.

My perception of sex was almost the polar opposite. I was all about exploring the secrets and reactions of another person. It was discovery, connection, seeing how my actions affected another person. That deepened as a relationship went on rather then becoming dull. There's only so much you can discover in one sex session, and the connection you feel increases as you have a library of things that have worked and failed as you've explored the sexual response of a person.

Early in our relationship sex was fun, easy, new. It really didn't matter what we both thought of it, it was a good time. It didn't take terribly long for that to change.

There was a middle section of our relationship where we didn't examine what we wanted from sex. We had it fairly rarely and when it did happen I thought it was fine (I realize in retrospect that even my experience could have been so much better). We weren't communicating the most basic of ideas about what we wanted in bed and, as a result, we weren't getting what we wanted. I don't think it was malicious, but we were young, I was not necessarily the most perceptive person and she was painfully shy about sex, particularly what she wanted (which she masked by appearing to be incredibly open about sex in front of everyone, but that's a discussion for later.). It's hard to wrap your mind around the fact that your sexually aggressive girlfriend who is showing every sign of being very knowledgeable and sophisticated and orgasmic, has, in actuality, never really had an orgasm and isn't having much fun. But eventually you have to come to grips with that and figure out how to realign what sex means to both of you and get it back on track.

For us, that meant that we actually had to have a conversation, but what we tried first was a bunch of fighting. It took a lot of wrangling for us to be at all comfortable discussing sex. We'd both read all the books, we could talk sex fluently with friends and strangers, but when it came to what WE wanted it was uncomfortable and difficult. We had tried talking about it, but we kept shutting ourselves down, not really hearing what the other one was saying and leaving unsaid the most important parts of our desires and glossing over in our minds the areas where our partner's needs conflicted with our own.

Toys really helped. One drunken night we were trying to pin down something about sex. So we went online and started shopping for toys. Somehow it was easier to talk about what we liked in the context of shopping. We got closer and closer to the real heart of the matter. After that night, discussions have improved every time. We're both almost completely comfortable telling each other what we want, and we're moving closer to being able to regularly give each other what we want. More importantly we've started having really good sex. Sex that's satisfying both of us.

Long story short, we started with ropes, I tie her up, but it's not about theater or pain or control. It's about caring for each other and making sex really, fully communal.

It was all about realigning what we want with each other. Sex is still about power for her, but its about me showing her that I can take some power and use it to take care of her. Sex is still about discovery for me, but it's about seeing what I can do with ropes and what her reaction is to certain poses and toys and actions. I get to watch her reactions and find out new things about her and myself and she gets to know that I want her more then anything and am willing to get outside my comfort zone and take some control over our sex life.

So, what I'm saying is that if you're in a long term relationship and you haven't talked about what you want from sex for a while, then do it. No matter how well you think you know yourself or your partner, something has probably changed over the past year, or even week. Also, be willing to change, or at least look at what you like in a different way, you never know when you might find that thing that transforms your relationship.
Tags:
Views: 3283
Related articles