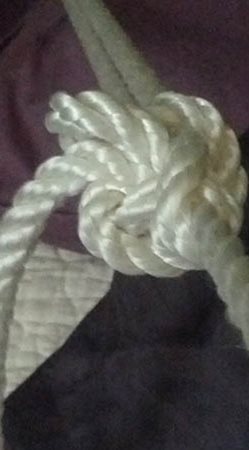 Taboos are powerful things. Anything that has power over our minds and imaginations can either imprison us or be used to make us happier. Maybe it's time to think about harnessing your taboos and using them to keep a long term relationship healthy and exciting.
Boundaries, desire, and the lure of the forbidden.

Her body above me, sweat slicked skin gliding easily over mine, hips grinding together, climbing slowly towards the height of orgasm. Her wetness intense, flowing, my desire cresting, peaking, seeking. My hand cups the roundness behind her hips, slides slowly down, feels the slickness where we come together, revels in the obviousness of her arousal. I slide my hand back to the swell of her ass, grip hard and a desire fills me, slides in around my head, pools in my chest and congeals there. I want to let my fingers slide where they're not wanted. The need for it is somehow intensified by the fact that I know she'll tell me not to, that there's a small chance of the whole experience falling apart if I even get close, that if I were to do it, I'd definitely shut off her arousal which excited me so much just moments before. But desire doesn't care. It wants what it wants and damn the consequences. It's particularly intense after months and years of wanting something you can't have. Maybe even something that, on the face of it, isn't even that appealing. Something that you only want because you can't have it.

Forbidden sex. The sharp snap in your mind of the transgression of a boundary previously sacrosanct. The pure thrill of the line obliterated. There's nothing quite like doing things that, for whatever reason, you're not supposed to do. Whether it's using toys when society frowns on it, tying up your partner when you're taught that a good man doesn't try to physically control women, or some other taboo sex act that you find yourself edging towards, there's power in taboos. So much of our desire system is tied up in wanting what we can't have.

The real question is how can we make use of this in positive ways in our long term relationship. It's easy enough to remember being a teenager and the slithery feeling in your stomach during your first tentative moves towards a breast, or the thrill of a handjob in the backseat of a car, but it's harder to bottle those feelings and figure out how to reach for them when you're dozens of years into a relationship with someone who shares everything with you. There can be only so many real taboos between long term sex partners and you probably don't really want to transgress them all the time.

So while it can be fun to lust unrequitedly after your partner's back entrance, we should probably look elsewhere for a real answer to using the power of the taboo in a long term relationship. (Not to say that pushing everyone's personal boundaries isn't fun or worthwhile, but that it's not something that you can keep going on forever). Probably the best taboos to break are societal ones. I'd start listing them, but they'd be examples from my society, and taboos have power only when it's your society that holds them. You'll know them by how they make you feel. When you think about doing something and you immediately get a sick butterfly tingling in your gut, that's a taboo with power. You can let that power keep you from performing the act or you can use that power to shake up your comfortable sexual routine.

Sometimes all you need is the suggestion. Maybe try sex in the car in the garage, or a blindfold, or a little light spanking. If you're dramatically inclined, a costume or two might spark some of those gut level, dread tinged feelings that can add a much needed spice to a routine that has cooled somewhat.

But maybe you really do need to transgress sometimes to really feel the illicit thrill. First, make sure you're doing all this in the context of consent. It's one thing to ask your partner if you can finger their butt, a whole other thing to just go sticking stuff in there without asking. That goes double for anything involving pain or restraint. Talk about it beforehand and make sure that everyone involved has a way to back out if it goes too far. That said, there's value in letting your partner cross your lines (for both of you). You never know when you're fulfilling a long held fantasy of theirs and you just might find out that that line you held so dear might not be so important after all. The things that make you feel most squirmy are the things that can help take you back to the teenage nights where you were simultaneously sick with fear and filled with hope that tonight will be the night you get your hand past her jeans.

So, assuming everyone is on board and consenting, you can go out there and explore the limits of the things that make you uncomfortable, that everyone frowns on and that might just get you arrested in some of the less tolerant areas of the country. Now's the time to let out all the stops, call in a friend for a threesome, follow in the steps of Humpty Hump and involve a major fast food chain restroom, or shove that XXL toy where it'll do the most good. You'll probably feel bad for a minute, but sometimes being bad can, well, you know.

The bottom line is this, we're all self mobile bundles of desires and taboos. We want strange things. We're disgusted by other strange things. It's always worth looking at what you and your partners desire and what disgusts you and when, in the heat of the moment, disgust might fall away leaving that pure, freeing feeling of power you get when you realize that the world holds opportunities you couldn't have dreamed of before the liquid moment when that taboo broke.
Tags:
Views: 3242
Related articles