Shrinking The Gender Gap One Taboo At A Time 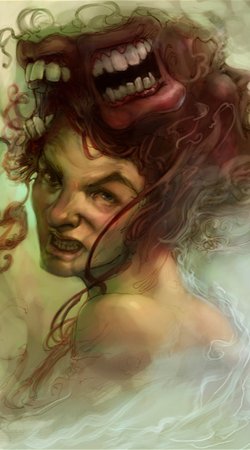 http://ggatz.deviantart.com/
You’ve probably all seen it by now, the remarkable study that reveals how the more sexually aroused a woman becomes, the more willing she is to swallow her scruples. Well, in case no one had noticed, men are no different.
The first time I asked a guy to go down on me immediately after he’d "finished" down there, he looked at me as though I was mad, then changed the subject to something else. The same thing happened the second and third time.

Because of these previous experiences, I read the report Feelings of Disgust and Disgust-Induced Avoidance Weaken following Induced Sexual Arousal in Women by Charmaine Borg and Peter J. de Jong with maybe a little less wonder and interest than others have. This isn’t a girls-only phenomenon, it’s all of us.

This is not the place to discuss what is and isn’t disgusting - that, of course, is a subject that we can all hold forth on and all of us would be correct. If something disgusts you, then it’s disgusting, no matter how anybody else might try to phrase it. I remember in my youth being fascinated by the notion of oral sex before I even knew it had a name, let alone that other people shared my fascination. One of my best friends, on the other hand, was onto her second husband before she ever put a penis near her mouth, and why? Because the very thought disgusted her. Just one example and I'm sure you could come up with many more.

We’re not here to talk about girls, though; there’s been quite enough of that done in other forums these last few days. Guys, on the other hand...

According to a random poll I created, conducted utterly unscientifically from my own possibly distorted observations over the past decade or so, the three things guys are most likely not going to want to try:

- And, as Smokedawg so eloquently put it in an article a couple of weeks ago: eating pussy and kissing ass. (Does that count as two things? Not if it’s done correctly.)

Now, the chances are, a lot of guys wouldn’t change their stance on those issues, or whatever else their personal yuckies might be, no matter how sexually excited they get. Just as a girl can be on the edge of the greatest orgasm of her life, but still won’t let him enter your own private nastiness here.

The difference is, he (or she, this is an equal opportunities issue, after all) will at least be willing to think about it. They might possibly admit that the idea is intriguing and may even join you in spinning out a verbal fantasy in which it takes place.

I admit that this is not a huge news flash. Various surveys over the years have informed us that a very high percentage of straight guys have at least fantasized about having sex (usually oral) with another man. The key word there is “fantasized.” Already in a state of sexual excitement, they increase their arousal by imagining something that they would not even admit to having ever considered when their pants were up and their dick was soft.

Why not? It’s because they consider it disgusting. For the exact same reason as they consider the three (or four) acts listed above to be disgusting, and for the same reason they, and we, will reject other notions. It doesn't matter what sex you are. Sexual excitement lowers sexual inhibition in everyone; lust makes lewd lovers of us all.

I’m not criticizing the report or the various sources that have reported and commented upon it. But the next time a group of researchers set out to tap another great untold mystery of feminine sexuality, maybe they ought to check to make sure that it’s not a masculine mystery as well.

Humans like sex. And the hotter they feel, the dirtier they want it. It really is as simple as that.