Enjoying The Joy Of Sex 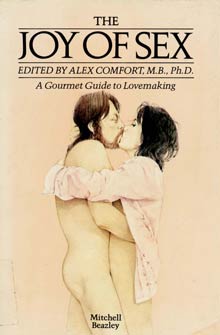 The actual mechanics of what they were doing eluded us when we were first introduced, or at least those of us who grew up without teenaged males in the house. But we’d stand and giggle quietly, then retreat back to her room to discuss what we thought they might be doing, and how they’d respond if we burst into the room, Polaroids flashing and tape recorders whirring.

Teenaged girls can have such cruel thoughts, sometimes.

We filled the gaps in our knowledge by picking up slang. Beating the meat, pounding the pope, spanking the monkey, pulling the pudding. Until we arrived at the kind of self-abusing scenario that the Spanish Inquisition might have devised, if they’d just watched The Texas Chainsaw Massacre before popping off for a spot of confession-extraction.

We made a pact. First to see a stiff penis wins an expenses-paid trip to the beauty salon, with each of us buying her one session apiece. So long as she could back up her observations with hard evidence. And then we found ourselves a copy of someone’s parents’ The Joy Of Sex, filled with wonderful line drawings of every conceivable act, and that was the end of that competition.

Published in this country, which had also never seen anything like it, and it quickly became a runaway smash. With good reason, too. Prior to The Joy of Sex, the only half-decent sex manual was forty years old, and utterly bereft of decent illustrations: Dutch gynecologist Theodore Van de Velde’s Ideal Marriage: Its Physiology and Technique. Originally published in the US in 1930, this guide to “increasing the forces of mutual attraction in marriage” was a worldwide best seller, translated into two dozen languages and discussing in hitherto unimagined tones of frankness such topics as female ejaculation and the importance of foreplay in a loving relationship.

The written descriptions were hotter than any published words available this side of the vilest, brown-paper-bagged bookstore, and at a time when television was still uncertain about even showing a married couple in bed together, Mr and Mrs Pencil (for there was no doubt that they were married) were getting up to things in the bookstore that many people had not even imagined were possible.

It didn’t even matter that the good doctor seemed to have an especially appropriate name, and that many of the acts and most of the descriptions were indeed aimed at assuring the male’s personal comfort, and wifey was simply the vessel from which he’d take his pleasure. A necessary accoutrement. A pot for his pepper. This was not a guide for liberated ladies (although of course they would soon follow), it was not a manifesto for the enlightened male (although ditto). The Joy of Sex, quite simply, was a guide to getting it on.

And its readers, one assumes, did. So much so that the following year, More Joy of Sex arrived to keep it company, and the books have never gone out of print since.

They were available everywhere, and turned up everywhere, too. Browse a mid-80s thrift store. You’d find them. Go to the library. There they were. Hardbacks, softbacks, slipcased collectors’ editions. Every bookstore had a copy, every parent...well, maybe not every parent had it, and not every child unearthed it, even if they did. But no matter how many rivals, updates and reimaginings of the original concept came along, The Joy Of Sex remained the who’s-who of what-goes-where until the Internet finally rolled around and put all the same information at our fingertips.

You could learn everything from those books. All the standard stuff was there, of course, couched in terms that sound so quaint today. Oh, how I wanted to learn to play mouth music, I thought, as I flicked through the pages and tried not to dwell (at least if friends were watching) on the section (pages 129-132...how do I remember this stuff?) that dealt most explicitly with oral sex. But bondage crept in, and swinging, too. Vibrators and voyeurism. Fetishes and furniture. And there were pictures of penises, fully erect, which was something you would never see in Playgirl. Or any other magazine, come to that.

They weren’t well drawn; in fact, they were sketchy at best. But the scale looked right and the dimensions fit those that our innocent minds assumed optimum, and the fact that the book was divided into sections, exactly the same as their cookery counterpart, reinforced the notion that sex should be fun. You start with the starters, move onto main course, liberally garnish with sauces and pickles, then wash it all down with a nice buttered bun.

“[A] woman who has recently had relations with another man [is an] unexpected turn-on for some males.” And for some girls too, judging by the thumbprints on my friend’s well-leafed copy. (We all found our own copies, as I’m sure you can imagine.) “They were there when I bought it,” she protested in vain, then went red when I suggested the talcum powder test. Let me take your fingerprints, compare them with the book...yes, again. Teenage girls can be so cruel sometimes.

We spoke knowledgeably of doing it “South Slav Style.” We discussed “foursomes and moresomes” and tried making lists of who would make up the numbers. Two pop stars, one actor and the cute guy at the gas station at the other end of Main Street. We worried about priapism, and what should be done about “hairtrigger trouble.” And we all shook our heads at “pattes d’araignee,” some of us because we didn’t like being tickled, and some because the idea of having spider legs walking over us, even in play without a spider in sight, was enough to induce apoplexy.

In fact, the only thing we didn’t understand was, why were none of the terms that Dr Comfort was teaching us ever heard outside of the confines of his book? No man, in all my years, has ever described the things I say at orgasm as “birdsong in morning”; I have never referred to my vagina, even after a scented bath, as a “cassolette” (French for “perfume box”).

Nevertheless, and no matter how old-fashioned the whole thing seems today, anybody giving thought to, or who is even aware of, the sexual revolution that reinvented mainstream American morality in the 1960s and early 70s, The Joy of Sex is what they should thank.

If only for the fact that without it, and whatever unimaginable curiosity might have convinced our own parents to buy a copy, a lot of what we learned back then might well have stayed secret for months, or even years to come.

Which means I’d have been out the cost of a facial. And I don’t mean one of the fun ones, either. (They’re not in the book, by the way.)
Tags:
Views: 3375
Related articles