Before You Spread the Rumor, Learn the Facts 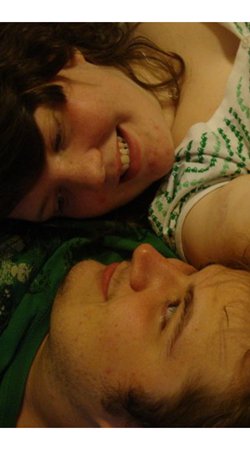 October is also Domestic Violence Awareness month, and while domestic violence is a horrible thing, I want to share my story of why you should always know ALL the facts before reporting anything. This isn't the same for every case, but it's something I had to deal with, and I'd like to share my story.
My husband JJ is my everything. He was my first boyfriend, my first kiss, and we lost our virginity to each other. He's always supported me in everything, and I couldn't imagine my life without him. My whole family loved him, but for some reason my mom thought he was abusive. Why? Because she never took the time to actually talk to ME about anything that was going on.

When JJ and I were still just dating, we were long distance. When he would come to visit, he would stay with me at my mom's house for about four or five days at a time. During those days, we would usually unleash about a month's worth of sexual frustration, and ravage each other for pretty much the entire time period. Of course, I'm kinky. What role does that play? Well, I like to be bitten and JJ likes to bite. Just playful nips and love bites, but I'm very pale and bruise like a banana. So after he would go back home, I'd be left with bruises all over my neck, shoulders, and arms. They looked horrible, yes. They were completely harmless though. My mom asked me about my bruises maybe one time in the whole almost year that JJ would come and visit me. When your mother asks you about bruises that you got from kinky sex you're not going to want to tell her why. So she saw my reaction as shying away from the subject, and making up stories about where my bruises were coming from.

Sometime around a month or two before I moved out of my mom's house, JJ came over to visit. I was so excited to see him coming up the driveway that I ran down my porch, slipped on the last step, and landed in a way that sprained my ankle pretty bad. My mom and my grandma were both freaking out when they saw my swollen ankle. I told them the complete truth about what happened, and neither of them said anything about it, so I figured they accepted the truth and we could all move on. Nope.

Not too long after that, I had a monthly meeting with my counselor, and my mom went in his office first. When he called me in, the first thing he said was "So I heard you fell," in the most condescending manner ever. I had to explain to an obnoxious, 50-something year old man that my bruises were purely sexual, and not only did I enjoy JJ biting me, I had asked him to do it several times. After that incident I confronted my mom about it, who played the victim, claiming she was just being a good mother. She said that I would have done the same for her. I snapped back by saying that I would have at least asked her what the situation was.

I later found out that my grandma had been calling all of my friends to ask what kind of person JJ was, and that my mother had told almost everyone she knew that I was in an abusive relationship. I think most of this stemmed from the fact that she never liked him to begin with.

I'm just lucky that I was over 18 at the time, so she couldn't do anything too ridiculous. I'm also lucky she never tried to get police involved. Though to me, if she honestly thought I was being abused, she would have gone to authorities first. This is another reason I think she only did it to spite us.

Anyway, I'm definitely not saying this is the case for everyone, because it's certainly not. I'm just sharing my story and stating that sometimes when someone says "There's nothing going on" there really is nothing going on. You should always use your best judgment though.
Tags:
Views: 1339

Princess-Kayla ♥
Hi, I'm Kayla. I joined EdenFantasys June 2, 2011. When I first joined, I had a single sex toy. Since then I've expanded my knowledge so much. I now have over 100 reviews, and I'm a go-to gal for my friends when they need advice on toys.

I'm 24 and happily married in a super kinky relationship.