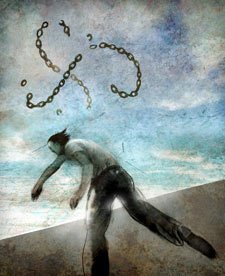 Freedom Problem by Eric H. Janzen
"Tara" had become my project. My goal in life. To show the rest of the world around us that a person could be changed for the better through the power of love. She would see how much I cared and loved her, simply by me not giving up on her. Surely it would work. I just had to stay by her side no matter how many trips to the ER it took.

""Men are like children. They cling to their mother's breast in hopes to receive some form of comfort. This is why so many men are miserable. They hold on to this tit no matter what horrid thing is attached to it. Never knowing that the store a block down the road carries bottles by the dozens.""

After my first trip to the ER with a split lip, I decided to stay away for a while. With the help of Shawn (My best friend) I somehow got my balls back. I was awaking to a new dawn. I was stronger and had self-respect again. I wasn't going to take it anymore. I just needed to see “Tara” face to face and let her know it was over! Maybe have a goodbye f%&k? Maybe stay and snuggle a bit. Or maybe just spend one more night with her. Either way, she was going to know by the end of it, that we were no longer together. Surely in the morning she would see my point and we could move on as friends. No matter what though, I wasn't going back to her. I would stand my ground! I would be a man and say “No more!!!” I deserved better. I could do better. I could fix “Tara” if I wanted to though. She was a pretty girl. I wouldn't be able to find another one like her in our town. The sex was great. I liked the way I felt when I was around her. I loved her. Surely I could just fix her. Fix whatever this was. We could be happy again. I'll show her. I'll show everyone.

Here we are again.

When she answered the door, she looked shocked. The line of stitches on my lip caught her eye. She couldn't stop looking at it. I asked if we could go upstairs and talk. Once in her room she turned on her charm. She gently caressed my lip and asked “If it hurt?” I told her not anymore. She joked around and said that once it healed it would make for a wicked scar. I could tell everyone I was in a bad-ass bar fight and won. Or I could say I flipped my motorcycle in the rain. Before I knew it we were joking about the scar. I was even making little jokes about the whole situation. I told her how Shawn's face looked when I went up to his driver side window. I told her the lie I told the nurses at the ER. She laughed and said “What?! You never changed a tire in your life! I would have told them you crashed your bike. It would have sounded cooler!” We laughed some more. She told me she was sorry. She cried. I calmed her down and in a moment’s time, we were having sex. All was forgiven. All was forgotten. The clock was reset and the minutes were counting silently away, waiting for it all to start again.

A home made of hate.

A few months later everything was fine. A few of my friends, including Shawn, ridiculed me for getting back with her. They couldn't understand it. I told them a thousand times that I loved her. That seemed to be the only thing that mattered to me, that we loved each other. Whose business was it if she got crazy every once and a while? When I told her how everyone was giving me shit for being with her, she decided it would probably be better for our relationship to move to a different town and get an apartment together. She decided it was everyone else around us that were the real problem, they were the reason she kept losing it. Like a fool I agreed. I got a job with my older brother and started to save. Within a month we moved into a studio apartment above a laundry mat in a town 30 miles away. We weren't even unpacked before the trouble started again.

She complained about everything. She bitched that we were too far away from her friends and family, that we lived in a shithole and that I needed a better job to pay for a better place. She called me a “retard” and a “useless pile of shit.” She called me everything but “Sweetheart or Baby.” I shrugged it all off, just like I had done a thousand times before. I tried to make it work. I tried to show her the brighter side to our situation. It never worked. I could feel it coming on, I knew she was about to blow again. I just didn't know when or how to stop it from coming. I was mentally exhausted. I was beaten down emotionally. I couldn't give up now though. I had to show her how good it could all be if she only saw it the way I did. It would just take a little time. She would come around.

One night I returned to the apartment from work. She was sitting on the floor throwing things from boxes all over the place. I sat next to her and asked what she was up to. She looked at me with that flare in her eyes again. I leaned back as she started to scream. “I'm trying to find places to put all this shit retard! What the fu^% does it look like I'm doing!?” I asked if I could help and that set her off. She jumped up and kicked a box against the wall. She started to scream about how our “Shithole” had no space for anything. She started to pick up dishes and throw them against the wall. I tried to calm her down and caught a piece of broken plate in the forearm. I continued to beg her to calm down, to no avail. Ten minutes in, everything glass was destroyed. The apartment was trashed. There were shards of plates stuck in the walls.

I tried to leave, I just had to get out. I reached for the door and noticed that my arm was gashed open rather badly. I turned to say something to her about it. I was genuinely scared. It was a very deep gash and the blood had stopped. I could see something that looked like a vein poking out of the gash. I went to speak, when the door was kicked open and slammed me in the back. I fell to my face and “Tara” went dead silent. An Officer grabbed me by my arm and the pain made me scream out. He looked me in the face and tossed me to another Officer waiting in the hallway. The Cop grabbed me and led me down the stairs. He didn't say a word. He threw me into the back of his car and left me bleeding in the back seat. The adrenaline from all the chaos was becoming too much for me to handle. I tried to take my shirt off to make a tourniquet. I cried out for help as I felt my head starting to get fuzzy. My eyes felt heavy. I struggled to keep them open as I forced my shirt over my head. I was struggling to get a full breath. I couldn't do it. I screamed again for help and passed out. It wasn't till nearly 48 hours later that I woke up. Once again I was in an ER room and once again with a barrage of questions I either couldn't or didn't want to answer. Even so, this was not my final wake up call.