Agents of Fantasy: The Ageless Appeal of the Male Spy 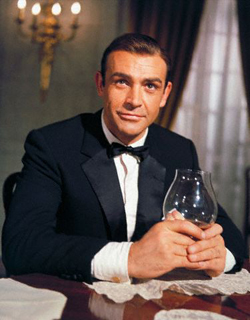 Sean Connery as James Bond in Goldfinger(1964) — © MGM/Corbis
Why we want the spies we love to love us back.
I wasn't lookin' but somehow you found me.
I tried to hide from your love light,
But like heaven above me the spy who loved me
Is keepin' all my secrets safe tonight.
-from “Nobody Does It Better” (theme from “The Spy Who Loved Me”)

And, of course, nobody does it better. I’m not even certain why you’d wish someone would. Would we love James Bond or 24’s Jack Bauer, or Alias’ Sydney Bristow, any more if they moved in and started leaving their dirty laundry on the bathroom floor? I’d venture not.

Intangibility is the kindling. Adrenaline and adventure fan the spark. And knowing the unknowable? That’s the gasoline in the bottle.

“Spies, by definition, live double lives—one that is open and another that is secret to all but a select few,” says John Cork, co-author of James Bond: The Legacy. “Spying is about seduction, convincing others to break the rules, to take risks that are outside the norm, to allow themselves to become vulnerable. There is nothing sexier than seducing or being seduced.”

The spy genre is hot. And if you don’t believe me, check the numbers. The Bond film franchise alone, according to Business Week, has grossed more than $4.5 billion since Sean Connery ordered his first custom martini in 1962. Shot in international locations, crammed with enough gadgetry to breed a thousand tech fetishes and teeming with women as willing as they are stunning and deadly, spy movies don’t just capture our collective imagination—they lock it up and waterboard it to the point of dementia.

For Your Eyes Only

Author Tammy M. Proctor, whose book, Female Intelligence: Women and Espionage in the First World War, examines the very real women who spied for the British during this tumultuous time in history, is well aware that the images cultivated around the profession are not, largely, based on fact, but she and Cork see eye-to-eye on the primary appeal of the genre: Secrecy.

“It’s getting at the hidden parts of society, the hidden secrets,” says Proctor, who also is H.O. Hirt Professor of History at Wittenberg University in Springfield, Ohio. There’s a certain – almost voyeurism—to it. [We are] able to see into the hidden parts of government or society, and [Bond and characters like him] do it with a certain joie de vivre that we all enjoy. There is a parallel to the super-hero persona. By day, Batman is a fabulously wealthy businessperson and by night, he’s this dark crusader. The spy has a similar double-sidedness that’s just fascinating.”

My friend, Alice, is, by anyone’s measure, an intellectual. She has multiple degrees. She is a college professor. She calls herself a feminist. And Bond a chauvinist.

The early Bond films—among my personal favorites—can’t help it, I tell her. They are of the era. Bond is a character borne of the 1950s. But even so, many of his conquests are not exactly fawning doe-eyed pushovers. If the international super spy is a male-generated fantasy, we can’t ignore the fact that the fantasy women he beds are hardly picket-fence housewives who’d be content to have his bangers and mash on the kitchen table at quitting time. Unless, of course, we’re talking Austin Powers.

Cork, a 007 expert, doesn’t defend him, calling him a chauvinist in the classic definition of the word. “He represents an alpha-male fantasy,” he explains. “He is dangerous, sexy, elegant and he dominates and controls in every situation … I think many of his attitudes in the novels and in a few of the films would mark him as a sexist.”

Cork believes the greater issue is the larger world the Bond films reflect. “Because Bond is a man, because he does represent an era where male dominance was so fully ingrained in Western society, his world often represents a male fantasy. All the hotel clerks are beautiful and willing. All the hotel maids are comely. It is a world filled with a plethora of female pilots, yet none are over 40 and all are gorgeous.”

Cork’s expertise falls squarely in the fictional realm of Bond, but Tom Lisanti, who co-authored Film Fatales with writer Louis Paul, knows what Pussy, Honey, Plenty O’Toole—moreover the actresses who portrayed these and other notable spy-genre characters, sometimes went through in the process.

“Many 60s-era actresses didn’t get the chance to break out of those decorative ‘bikini roles,’ which is what they were called,” he explains. “They were often told by their agents that if they hadn’t ‘made it’ by 30 they should just try to find a husband. And unfortunately, that was the God’s honest truth.”

“The number of female characters who die—it is pretty high,” admits Proctor—who regardless, calls herself a fan of the genre. “Mata Hari was executed. A lot of the women who were kind of flamboyant were executed or imprisoned for long periods of time. Melita Norwood (a British woman who spied for the Russians for three decades) was just a little old woman when she was finally caught. Clearly she wasn’t a Mata Hari-type character. She was successful because she flew under the radar. The disturbing part is that the sexualized, vamp spy characters—they almost always die.”

Alright, womyn, feminists, proponents of Girl Power, prepare to string me up:

So what if he’s a bit of a chauvinist. So what if he’s arrogant. He’s kind of earned it, don’t you think? I like those “Michael Cera-is-quirky-and-sensitive” flicks, too. But I’m still not casting him in the next Transporter movie.

“All successful fiction,” says Cork, “taps into how a portion of the population looks at the world.” The Bond mythos, he believes, combines the faults of the bad boy and makes them part of his appeal.

“Many women, on some level, are attracted to dangerous men. Many women, on some level, want to have a man who is virile and attractive to other women, even if this means the man is unlikely to be exclusive. Bond embodied that in novels and in movies in a way that remains particularly attractive. He may screw around, but that's his job. He may kill others, but it is all for Queen and Country. He may be willing to screw anyone, but he does save the world on a regular basis.”

Oh, James. Is that a dagger in your cloak or are you just happy to see me?
Tags:
Views: 1474
Related articles