The 7 Year Itch: A Look Back at Secretary 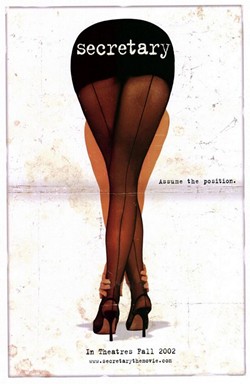 Lions Gate Films
“The sweetest romantic comedy about S&M since, well...ever,” says Blackbook of the then-quirky, now-seminal film Secretary. Was it a massive step toward the mainstreaming of kinky culture or a lopsided portrayal that did more harm than good? Seven years later, people’s opinions remain sharply divided.

I was 24, just discovering James Spader and still trapped in my conservative, pre-high-speed-internet hometown. The lone independent video store that had boasted a large back room was bought out by the very Blockbuster I found Secretary in, and the movie hadn’t come to the only theater in town (the one that would, years later, post giant warnings when it dared to show Brokeback Mountain).

But those aren’t the only moments of unreality Secretary viewers dislike. “I don’t feel the part of an actual boss hiring someone for the intent of being an SM toy is accurate at all,” says Shell, a 29-year-old with five years in the kink community. “It’s the whole sexual harassment thing.”

Jake concurs: “If you’re a boss and offer to spank your secretary for typos, you’re gonna get sued! You’re not actually going to find a beautiful slave. You will, in fact, find yourself somebody’s bitch in the downtown holding pen.”

Once the intensity of my viewing experience had settled somewhat—and my own in-person kink experience broadened—I could see the truth in the viewpoints of the film’s detractors. Watching the movie again, I could see all the plot holes and inconsistencies, the inappropriate presumptions and unrealistic depictions. But there were still too many joys to write the film off completely; I found more philosophic truths my next time around, even if they were created via a fairly broad artistic license.

Twitter denizen Guilty also found different notes of truth in the film: “I hadn’t known how close the kink scene was to those who self-harmed; a surprise to me.” But far from coming away with an inaccurate perception of these two things as joined at the hip, Guilty notes: “I know there’s a tiny bit of cross-over now. The film wasn’t meant to be representational of either community. It’s Cinderella.”

For all its foibles, the parts generally considered “right” in Secretary are considered very, very right. Jake notes: “They did such a wonderful depiction of the kind of poise and calm and peace that can come from really well-developed slavery and submission.” The film’s opening flash-forward to Lee dreamily working her way through office tasks while in intense bondage shows Lee “looking completely at ease and happy and productive, more so than she ever did at any other time in the movie. It was striking to me, beautiful and very much an encapsulation of everything that’s great and beneficial about this practice. The self-possession—which is not the common media representation of this!”

Typos on the Letterhead

The mainstreaming of kink cuts both ways, particularly when it’s packaged up as a cute, sexy rom-com. Several years after Secretary’s release, my father called me and asked whether I had seen it. Presuming that this was a “call the kinky writer and see if I’ll be creeped out by this movie that just came on Showtime” kind of inquiry, I said that I had and asked what he wanted to know. Laughing, he admitted that he had rented the movie (probably at the same Blockbuster I had years ago) and watched it with his wife the night before. I later looked up the movie poster and understood: It features a woman bending over in fishnets, stilettos, and a short skirt from behind, with the word “secretary” in typewriter font across her ass and “assume the position” as the tagline. Presuming a standard tits-and-ass movie lay in wait inside is understandable, and perhaps intentional.

My dad laughed his way through his opinions, having found the film weird and outrageous. While one could make the argument that exposure was good for him, this type of dramatized, sometimes-unrealistic portrayal led to a few months of shock when he stumbled across an article I had written about my own BDSM experiences. Unable to read beyond the first paragraph, he presumed my experience based on things like Secretary and stopped speaking to me while he struggled with what he thought I was up to. Once he brought himself to read the article and see it as it really was in my case, he found it infinitely more palatable than the film’s often-overdone set pieces.

Indeed, it may be the dearth of reasonably realistic depictions of kink in film, even seven years later, that keeps Secretary in the mix. I still sometimes assign it as required viewing for certain kinkster newbies under my aegis, particularly those who come in with a heavy sense that dominants should never show weakness, always be right, and perpetually fart rainbows—but I make sure to sit beside them during the viewing and head off the inaccuracies as they arise. It is far easier to provide as-it-happens fact-checking for Secretary than it is for the wildly inaccurate portrayals of BDSM shown in Law & Order, Bones, and other legal/medical dramas eager for a sexy-problem-of-the-week premise.

At present, Secretary is really the only mainstream movie we have to point to, for all its weaknesses and flaws. Then again, all of us in the lifestyle suffer our own foibles; the desire for a perfect media representation is as implausible and fanciful as the desire for a perfect play partner. Maybe, in the end, Secretary’s lesson to all of us is that nonfiction is for learning the bones of a practice, and fiction is for learning the heart. (Or the boner.)
Tags:
Views: 1590
Related articles