Real Person Slash — Does It Cross The Line? 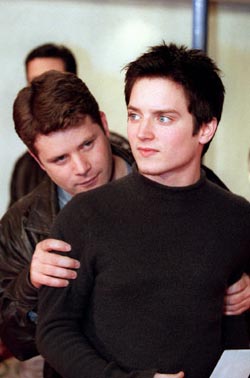 By now, slash is practically a household word in fandom, and a “slasher” isn’t just a gory movie anymore. But the kind of slash that’s about Frodo and Sam or Kirk and Spock has a redheaded stepchild: real person slash (RPS). Is writing slash about real people so different? Does it remain a fantasy, or does it have a greater impact?

A Crash Course In Slash

Any person of a male persuasion who has achieved a certain amount of celebrity past, oh, 2005 or so should expect to have slash written about them. If they didn’t expect it, they haven’t been paying attention! The quiet, guilty swaps of Kirk/Spock slash in the 1970s are no longer clandestine. Authors of original works who also wrote slash (like me) don’t have to worry anymore that if someone connects the slash with the “pro” author, their career will be ruined. And folks from all ways of life who enjoy imagining musician X sucking off tour manager Y can find people of a similar persuasion with nothing more clandestine than a Google search.

Whether this changes how people relate to celebrities is something fun to ask and hard to answer. Certainly it leaves fewer people in the “I’m sure I’m the only one who fantasizes about Johnny Depp and Orlando Bloom helping each other out of those pirate costume” boat, and more than one slasher has voiced the fear that if they ever meet their subject, they won’t be able to think of anything to say besides Hi! I’ve written porn about you! But logic suggests that slash communities probably draw more like-minded people together than they “create” more slashers to begin with, and anything that makes people feel less alone or marginalized in their sexual fantasies is probably a good thing.

In many ways, slash is a kind of elaboration on the typical fan fantasy about a celebrity, only instead of inserting ourselves into the celebrity’s love life, we insert some other hottie. Sometimes it’s less an exploration of sexuality and more one of relating; how would these two people get along? What problems would their respective careers cause them? Slash fiction often straddles the line between outright sexual fantasy and sheer authorial bliss — characters your readers already know and would love to read doing the most mundane of things. For many people, slash is a way to do the fun part of writing with none of the heavy lifting, and the sex is almost (or completely) secondary. It’s not a fan creation that’s easily pigeonholed!

So, what’s the big split between slash and RPS about? For some of you, it will be obvious: of course writing about Backstreet Boys getting it on is on a different level from writing about Aragorn and Boromir from The Lord of The Rings. For others of you, it will make no sense: fanworks are essentially fantasies written out and drawn up to share, and it’s no secret people fantasize about celebrities as well as fictional characters, so it’s all the same. And there’s the rub.

The Argument Against RPS

It goes like this: RPS may cause real harm to the celebrities involved by invoking emotional distress. They may feel misrepresented at best and horrified by the depictions of themselves fucking friends, band members, or co-stars at worst. For celebs with particularly active and public RPS communities, search engine results can begin to skew toward RPS sites even when nothing more than the celebrity’s name is entered, thus bringing the RPS to the attention of fans who were not looking for it and may be disturbed by its very existence.

...And The Argument For It

This one goes along these lines: to fans, a celebrity is a persona, and no amount of interviews or behind-the-scenes footage will allow the fan to really, truly “know” the person behind the image. Therefore, RPS involves a construct of personality not dissimilar from a fictional character. Since most celebrities are far from disturbed by their appearance in fans’ heterosexual fantasies, any upset provoked by RPS is symbolic of homophobia. Unsuspecting fans discovering RPS through search engine results who are disturbed by the mere knowledge of its existence also suffer from an orientation double standard.

So What’s Really Going On?

As is typical in culture wars, no one side is unequivocally correct. The above arguments are extremes, and you’ll find many people on either side who aren’t so strident. Most of RPS fandom, in fact, sits somewhere along the fence. For example, it’s generally understood that celebrities should not be shown RPS fanworks they feature in, and fans who do bring artwork to be signed or tweet links to celebrities are generally excoriated by their respective RPS communities.

Often, celebrities discover RPS on their own, and the resultant inevitable panic in the “found out” RPS community speaks to a certain uncertainty within some RPS artists about what they do. Debates about the morality and decency of RPS are common within RPS communities, and it’s easy to find artists who run the gamut from “out and proud” to deeply conflicted and considering deleting all of their works.

Is There An Impact?

Setting aside all the panic and discomfort, is there a real, tangible impact to RPS? While it’s impossible to quantify this scientifically, I can tell you that I have read, written, and participated in RPS communities of various stripes for the last fifteen years, and the impact on the celebrities in question seems quite consistent:

No, I’m not kidding. In the age of a nearly-dead record industry, declining ticket sales to movies and concerts, and an ever-expanding consideration of artistic works as luxuries which cannot be afforded, the RPS fan is the one you want in your corner.

Typically young, armed with disposable income, and hugely loyal, RPS fans are a force to be reckoned with when it comes to sales and word of mouth. I don’t know a single RPSer who hasn’t drawn more people into the fandom, either through their works or by talking up the celebrity in other contexts, and most will opt to spend their cash on the object of their fanworks whenever possible.

For some celebrities, this fanbase comes at too high a cost, and they work hard to dissuade RPSers through letters from lawyers, takedown notices, and public condemnation. (Since all fanworks exist in a legal gray area, a popular tactic is to threaten legal action against archive sites which make incidental use of copyrighted images.) These are common actions taken against RPS and slash alike, and often with the same result: alienation of a far larger fanbase than that community.

Whether celebs are comfortable with RPS or not, it’s a standard feature of a certain level of fame, and there is no “cure.” Communities that appear to have been beaten down still exist; they simply become more difficult to locate to outsiders. It’s entirely possible to still want to finish a 100,000-word tale of love between two band members even while feeling guilty and ashamed because both of them have said RPS is horrible and should not exist.

Sexuality, fantasy, celebrity, and community are powerful drives that cannot be willed away. Regardless of how anyone may feel about RPS, there’s no question that it’s here to stay.
Tags:
Views: 2042
Related articles