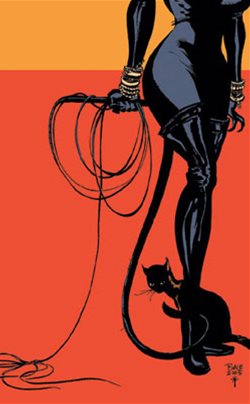 Venus in Furs @ Luna.com
Let's discuss the history of kink, as well as some ways that you can implement some kinky practices into your own life.

"People who want to live like Olympian gods must have slaves whom they throw into their fishponds and gladiators who fight during their masters' sumptuous banquets--and the pleasure-seekers never care if some blood splatters on them."

But I bet that you, my dear and curious reader, would love for me to whisper informative naughty nothings into your ear.

When I first met Cat Daddy (a self-chosen moniker), she seemed shy- all nice and no naughty. We ate Oreos and bonded over books.

I didn’t know that the 22 year old microbiology major loved to be tied down, or that she would keep my floor constantly covered with things like ropes, handcuffs, spreader bars, and silk scarfs.

While silk scarves may seem extravagant, they are a necessity. Your local thrift store will keep you stocked and if the salesperson winks at you- wink back; it’s only polite.

The term sadism - the act of finding pleasure in the degradation or pain of others - originated from Marquis de Sade’s title, the author of the infamous 18th century text 120 Days of Sodom. Napolean Bonaparte, the man responsible for approximately 2.5 million deaths during the French wars, thought the the Marquis de Sade’s fiction was written from "the most depraved imagination" and ordered Sade’s imprisonment. Perhaps the Marquis' literary fame invoked the jealousy of Napoleon, who was also a writer - but of markedly less-imaginative romantic fiction.

Vatsyayana, a celibate Indian monk who penned the Kama Sutra in the 2nd Century, wrote, "[sex] can be compared to a quarrel, on account of the contraries of love and its tendency to dispute." The Kama Sutra not only tells readers where to “strike with passion,” but how - "back of the hand, fingers constricted, fist or palm."

Fetishism, the sexualization of objects or body parts that aren’t part of the reproductive system, isn’t uncommon and foot fetishes are one of the most widely known. Maybe foot fetishism is transmitted through ink, because writers Quentin Tarantino, F. Scott Fitzgerald and James Joyce have all professed love for women’s soles, nails and toes.

It requires trust and bravery to recognize, let alone voice, sexual preferences. Never shame others. It may reinforce the normalcy of your sex life, but it is extremely harmful to the psyche - and the public image of those involved in consensual activities.

Consent, safety and communication are the most important aspects of any sexual act. Experiencing pain or distributing it is abuse if it occurs without both you and your partner’s consent. Make sure, before you play, that you and your chosen partner(s) have communicated needs, limits and safe words.

You can have sex while being fully clothed in the park, “shhhhing...” - so the roommates don’t hear, nibbling off body chocolate, pushing the cat off the bed, wearing latex and leather, or wielding a paddle. No matter how you find pleasure, remember that your body is your own and that no one should define your limits for you.
Tags:
Views: 4940