Gendered Technology: Sex Toys and the Perpetuation of Feminine/Masculine Ideals 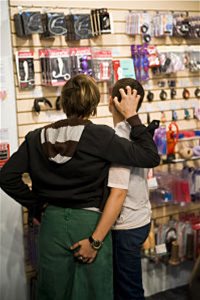 goodvibes.com
On EdenFantasys.com, a search of the word “pink” yields 48 pages of content while a similar search of the word “blue” only produces 26. Traditional gendered ideals are upheld not in the functionality of sex objects, women’s toys are insertable while men’s come in the shape of disembodied torsos and vaginas, but even in their color and design.

"Sex toys do not need to be tethered in a gendered reality, just because gentitals differ does not mean asthetic and tactile needs do. Instead of using sex toys to perpetuate gender stereotypes, creators should be directing their company towards the creation of non-gender specific objects and subverting traditionally harmful and stifling traditions."

Sex toys are often extremely gendered and reinforce ideals and norms, however, a few new lines are seeking to overthrow this stereotypical marketing scheme.

Vibrators were invented in the early 19th century as devices for doctors to use on "hysterical" patients, women who exhibited fatigue, anger or hallucinations. Doctors induced hysterical paroxysms, aka orgasms, in their patients and this was believed to temporarily relieve symptoms of hysteria. Vibrators were invented as a more efficient way than hands to give women orgasms, and were soon marketed as at home devices. Galen, a famous second century physician who left a lasting impression on medicine, wrote that after his treatment, his previously hysteric patient “was free of all the evil she felt” (Galen 150 A.D., Ringrose 2012). At the sex toy museum, The Masturbation Hall of Fame in San Fransisco, hand-held vibrators about the size of a child’s head and vibrating saddles are on display for visitors to laugh at, but truthfully sex toys haven’t changed much - they have just become more gendered (MHoF 2013).

Male sex toys primarily stem from the invention of sex dolls, complete with up to three orifices. In WWII, Hitler’s Nazi soldiers began exhibiting high incidences of syphilis as a result of travel and prostitution which killed thousands in the military. As a precaution, a special task force was created to distribute sex toys, a blow-up doll in the shape of women that conveniently fit into the soldier’s packs. The task force was dismantled and the factory, where the concept was birthed and carried out, was lost to a bomb in 1948. However, the concept of sex dolls and sexualized plastic body parts lives on.

Currently, women’s toys often feature vibrating butterflies, insertable "pearls," sparkles and swirls covering pink phallic objects; while men’s lube is sold as “rugged,” “easy,” and words like “rough” and “fuck” cover the label. Male toys are usually simple, although a great deal more expensive than female toys, and the two main sex objects are Fleshlights, tube-like devices made to mimic the feel of an orifice, or an entire body made of TPR, a rubberlike pseudo-skin material. Heteronormative ideals are upheld in the sex toy industry. Objects sold to women are often in the shape of a penis, while those sold to men mimic the feel of a vagina or anus.

A few sex toy online stores are seeking to expand their customer base by carrying items for gender non-conformists. On EdenFantasys.com, "packers," flaccid dildos worn under clothing, are sold to trans* or packing people: “We know how you like it - that bulge between your legs that reminds you with subtle weight. Whether you're looking for comfy soft packing dicks that have been known to pass the squeeze test at gay men's clubs or cocks you can actually pack and play with, you'll find the best genderplay toys here” (EdenFantasys.com 2013). Notice the ambiguous “you” denoting a lack of gender, the subtle reference to gay clubs and the nod to gender players. In an effort to be more accepting of gender variation, and thus gain more sales, sex toy sites are improving both their marketing strategy and their product variation. On a competitor sex toy website, a lot fewer genderqueer friendly objects are carried. A search of the words “packer” and “gender” yield zero results, whereas on EdenFantasys.com they yield thirteen and ten, respectively. In order for sex toy markets to thrive in an increasingly accepting America, gender variation needs to keep up with consumer demand.

Sex toys that are created to look like female torsos serve to literally objectify, make into an object, women’s bodies. These fake torsos have breasts, a stomach, a buttocks, and a vulva. Making a replica of the idealized woman makes women’s bodies “usable.” These 30 pound hunks of “Fuck me Silly” TPR material pseudo bodies are designed with inhuman, barbie-like dimensions. The breasts are large, the body "young," the skin white, the hips small and the stomach non-existent. Intersections of race, age and ability unite in this fake body in order to give the user the ultimate idealized doll: a young, Caucasian, able bodied slave. Sex dolls are primarily marketed towards men with both the female and the male rubber and plastic models being marketed towards men who like to have sex with female or male bodies. In a world where bodies are sexualized, idealized, and then created and shipped, men seem to be the primary buyers.

Males are also the target of sex objects called “Fleshlights,” which are small flashlight sized tubes that house artificial vaginas. Male geared objects are mostly pieces of female bodies, and sex toy sites and stores supply this niche by selling artificial breasts, vaginas and buttocks. However, unlike male toys, female sex toys are gendered in such a way as to make female sex and masturbation aesthetic. Women’s toys are rarely realistic, and if they are, only the phallic shape of a penis is retained, while the color is shifted to pink or red. Vibrators usually maintain a fairly ambiguous cylindrical shape, with designs like hearts, flowers and kisses located on the hard plastic cover. By selling corporeal reproductions of women’s bodies, society is accepting to marketization of the female form. Women, on the other hand, are expected to be less concerned with owning or “fucking” a body part, than achieving orgasm. Women’s toys rarely feature men’s organs, and if they do it is in the form of sex organs- usually white or black, large, lacking veins or texture and almost completely lacking in features that would identify them as belonging to an actual person. Why does the male orgasm come at the cost of objectification, while the woman’s does not?

Sex objects need to be redesigned to move away from gendered colors, shapes, and functions. A few lines are already doing this. The most popular sex toy, according to a poll on EdenFantasys.com, is the Hitachi Magic Wand, a vibrating "wand" that was originally marketed as a muscle massager. The sex toy industry, and consumers, soon realized the potential behind this plastic back massager and its sales have skyrocketed since its invention in 1972. The Hitachi is white with blue detailing, is not insertable, and doesn’t look very sexual with its large head and power cord. The toy is not sold with any one gender in mind and has thus bypassed the gender divide in sex toy sales. The Leaf line is marketed as an eco-friendly, genderless, sensual product line. All the products are green and resemble leaves or stones. Mimicking nature allows the creators to bypass “female or male” constraints and the tiny vibrating leaves are not designed, or marketed, towards one sex or another. The packaging, for both the Hitachi and the Leaf, is simple, economic and non-sexual. Clients shouldn’t have to worry about stigma when receiving their sex toy in the mail, leaving it out in a house, or giving one as a gift. Hopefully this will go a long way towards making sex toys more accepted in society.

Sex toys are often recommended to women, yet male sex toys are often stigmatized. This makes it harder to redesign and talk about them as helpful and even necessary objects in our society. Male toys are often touted as unnecessary. This is untrue. According to a 2009 Indiana University study of adult Americans, 53 percent of women and 45 percent of men have used a vibrator at least once in their lifetime (IU 2009). Males use toys a lot more than people assume, and as such their toys should be redesigned to avoid violence towards women, disembodying and objectifying women’s bodies, and marketing towards a solely heterosexual and non-trans* consumer. Packaging does not need to contain words like “Fuck,” plastic women’s bodies don’t need to be marketed under the name “Fuck me Silly,” and idealized body parts do not need to be the only ones in circulation.

Assuming that women need phallic objects to orgasm and that men must have access to rubber breasts and a vagina is incorrect because it assumes a direct connection between biological sex and sexuality. As Shulamith Firestone said, “We are no longer just animals. And the kingdom of nature does not reign absolute” (Firestone 1979). Firestone believes that we have the ability to change the world to fit us, rather than allowing ourselves to be ruled by what we see as a biological reality; “the whole sphere of the conditions of life which environ man and have hitherto ruled him now comes under the dominion and control of man who for the first time becomes the real conscious Lord of Nature, master of his own social organization” (Firestone 1979). Sex toys could be marketed in a less gendered way and could be designed without idealizing, or commodifying, people’s bodies. If people, sex toy companies and sex toy designers could recognize their own ability to change the world through their technology, we could exist in a completely different society, hopefully one a lot less gendered.
Tags:
Views: 3674