Two Scoops: What Flavor is Your Vanilla?

by The Beautiful Kind Published: November 04, 2009 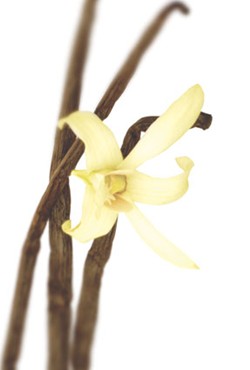 Vanilla. To the epicurious, it’s one of the world’s most prized spices. In the bedroom, however...well, nobody seems to know what it is. Except that they either are or aren’t vanilla. The Beautiful Kind takes a look at vanilla...and in the process, bakes a very special cake...

“You’ll never believe what the topic for my first SexIs article is!” I announced to my girlfriend over coffee.

She recited them on her fingers: “Pain, pee, poop, and pets.”

I snorted. “NO! Actually, it’s the opposite of that.” I braced myself for her reaction, then bashfully revealed, “I’m writing about vanilla sex.”

“YOU!” she shrieked. “The closest to vanilla you get is that time you ate a bunch of vanilla ice cream and drank a bottle of red wine so you could throw up on that guy with the puke fetish!”

“That’s not true!” I protested. “I’m all about the vanilla sex!”

Which is true—after all, vanilla is the foundation of sexuality. And as a woman who regularly has her cake and eats it too, I’ve established my own Sex Spectrum that follows the basic guideline of...cake.

You see, sex is just like a cake. Repressed is not allowing yourself to have any cake (even though you really, really want it!). Vanilla is the batter of the cake—it tastes great on its own. Kinky is the chocolate buttercream frosting. Perverted is when the cake is personalized with the words ‘Happy Golden Shower!’ And Fucked Up is if you fart on the cake.”

Hmm, I should hold a bake sale…

The Ingredients of Vanilla

Oddly, I’m finding it easier to say what is NOT vanilla than what IS vanilla. The line dividing the two is increasingly blurry, and every concept deserves qualification.

I had a lot of fun polling my friends and family on what they considered vanilla sex. The question usually garners a nervous laugh and confusion, and then an hourlong conversation ensues, allowing me an audience to their sex lives.

My favorite response was from my dad. I interrupted him watching the football game in order to ask. He tore his eyes away from the screen and looked at me blankly. “I don’t know what that is.”

He lit up. “It’s missionary position! And that’s it.”

All right, I wouldn’t go THAT far. At least my short list generously included basic sex toys. But let me expand on that.

Vanilla sex is usually characterized by sweet, sweet lovemaking. Vanilla sex is typically sensual, romantic, and more about pleasure than pain. But you CAN have rompin’ vanilla sex—not just passionate, but downright rodeo-rough. Hair pulling and a slap on the ass while doing it doggy-style is vanilla, but if you further either one of those activities, you are crossing over into Kink Country. Make sure and have your passport ready.

Speaking of positions, just about every position is vanilla in my book—girl on top, reverse cowgirl, lotus, doggy-style, etc. The Kama Sutra is vanilla disguised as exotica—it’s packaged as if it hails from a far-off land, but is basically plain rice pudding spiced with cardamom and saffron—kheer.

Vanilla sex qualifies for most parts of the house—the bedroom of course, as well as the kitchen, dining room table, living room, and back deck. Sex under the Christmas tree is very vanilla due to the romance factor. One of you wearing a Santa suit, however, renders it not vanilla.

You can take vanilla sex outdoors, to a degree. Public parks, camping, on a boat in the middle of the lake under the moonlight—vanilla. Sex in an elevator is NOT vanilla. Neither is sex in an alley. Both are too risky or dirty.

Casual sex/one night stands in and of themselves are vanilla sex activities. It is not kinky to have no-strings-attached sex. Our primal sexual instincts are vanilla-based. Humans are animals, after all. The original purpose for sex was procreation—other layers and meanings have developed over time. Any evolutionary biologist can tell you that exploring the gene pool is a common pursuit for both men and women.

You can have vanilla sex with a prostitute, although what’s the fun in that? If you’re gonna pay for it, you might as well whip out your clown fetish. Oh—and most fetishes are not vanilla. Elvis’s fetish for young women wearing white cotton panties was vanilla on its own, but he liked it better if they were teenagers and wrestling each other. Ladies and Gentlemen, Elvis has left the Vanilla Building.

You are what you wear: stockings, lace, and lingerie on a woman are all vanilla. Put any of that on a man and voilà! Not vanilla! Leather and latex are not vanilla, unless they are materials incorporated into your couch/car seats or your condoms/children’s birthday party (I’m talking about the balloons, you weirdo.) Anything that can be bought from a mall can be safely stored in the vanilla drawer, but if you feel the need to expand your shopping to include sex boutiques or online specialty stores, you are probably stocking your kinky cabinet.

Light bondage with silk scarves or ties and blindfolds are vanilla, but as soon as you get into handcuffs (even the fuzzy kind) and rope, you are crossing the line. I am basing this assessment on perusing books that are geared towards spicing up a dull marriage.

Talking dirty can be vanilla, so long as you aren’t whipping out the big, bad derogatory words like bitch, slut, whore, and cunt. Stick with “fuck me, big boy,” and “your pussy feels so good.”

Victoria’s Secret is vanilla. So is Playboy. Hustler is NOT vanilla. Getting more literary, Harlequin romance novels are vanilla. Anaïs Nin and Anne Rice are not.

Vanilla is mainstream; kinky is alternative. Therefore, Garth Brooks is vanilla. Nine Inch Nails is not. Shaving your genitals is so common in our society it’s vanilla. And get this—a woman in a tank top who doesn’t shave her armpits in the United States is telling the world she is kinky. So are women who sport Bettie Page bangs.

How about roleplaying? I say teacher/student, cop, and boss/secretary falls under the vanilla umbrella category, but if you are roleplaying uncle/niece or rape, you are in pervert territory. Which is fine, so long as it’s safe, sane and consensual.

I’d like to say that some of the best sex I’ve had has been vanilla—but that wouldn’t be true. The fact is that I’m too much of a pervert. But for when I’m in a vulnerable, sweet mood or I just want to chill out, I love me some vanilla. There’s nothing more satisfying than partaking in an all-you-can-eat pleasure buffet. Vanilla sex is a vital part of a complete sex diet. Being stroked, caressed, massaged, licked, and worshiped is my panacea of choice, my chicken soup for the soul.
Tags:
Views: 2126
Related articles