5 Ways to Ruin Your Sex Life through Communication 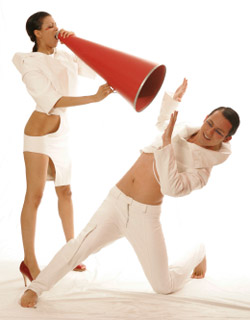 Want to know some great ways to mess up your relationship...or would you rather get some hints on how to prevent it?

Me Tarzan, you Jane...not a formula for romance

Sadly, more sex lives in our society have been totally fubared through the inappropriate use of interpersonal communication than through the lack of a good birth control device, running out of batteries at the last possible moment, and that embarrassing last-moment lack of libido. The sad thing is that when we were growing up, we didn’t exactly get the primer on real talk about sex; we got all sorts of messages that, in many ways, boiled down to the concept that if your partner really loves you, and you really love them, then your sex life will magically be perfect! I really don’t know anyone that’s found that fairy tale to be true; in fact, I’ve known a lot of people who carry around massive bruising from beating their heads into the wall trying to figure out what they can do to get the sex they really want, with the people they want, with the frequency they want. So…I offer you this brief article covering a few really big screw-ups that I hope you’ll never make, and some solutions to the problem of communicatus nonexistensus.

Problem: Really, during sex is not the time to broach a new sexual desire you’d like to explore - nor is it the time to set it up so that the intended addition is already in the know - and ready to jump in! When we’re already turned on, we’re more likely to have a negative reaction to big, unknown changes; it’s also the worst time to try to negotiate safer sex issues or whether that fantasy that you have is something that they really want to participate in.

Solution: Bringing up your wants, needs and desires is important, but timing is everything – and in this case, During Sex is not good timing. In fact, I'd suggest not doing it in the bedroom, or when you're not even in the mood at all. Neutral location, non-sexual mood, and privacy affords your partner enough safety and space around hearing what you're asking for, and not being pressured to agree to anything unless they're comfortable with it.

Your partner is going down on you with a fierceness that brings to mind a Klingon mating ritual gone awry. There are teeth everywhere, saliva is soaking the sofa, and you’re just thinking that you wish they’d stop the piranha-job. In order to get it over with, you either fake an orgasm (if you can get away with it), or pull their head away and feign insane levels of passion so that you can move on to something else…that doesn’t involve their mouth on your parts.

Problem 1: This is dishonesty – not of the sort that gets you thrown in jail, but of the sort that creates unrealistic expectations in relationships. If your partner thinks that what they’re doing is good for you, they’ll usually keep doing it. And if they think you’re actually getting all the way to the breaking point, they’ll do it even harder (ow!).

Problem 2: Additionally, you’re lying to your partner about your pleasure – when they realize you’re faking it, they’ll wonder what else you’ve been faking…and voila! Distrust has been sown.

Solution: Try being honest – but not brutally so! If you can do it while they’re mishandling your bits, move around a little and tell them something to the effect of “sweetie, I would really love it if you’d lick / touch / stroke me this way”…you can even show them by touching yourself (hot!) or guiding their mouth or hand as they touch / lick you (hotter!). If they’re just not getting it in the bedroom – wait until a non-sexual time and tell them that while you love their desire to give you lots of attention, it’s not as good as it could be – and tell them what you really want.

Problem: With that attitude, you won’t. Rather than actually negotiating for the sex you want, and respecting your partners’ boundaries, you’re using the oldest tricks known to humankind – passive-aggressiveness and kvetching. Passive-aggressive behavior, for those of you who aren’t in the know when it comes to interpersonal drama, is when you whine about what you want without coming out and saying it…and kvetching is a nice, Yiddish term for bitching and moaning. Here’s the thing: nobody likes it. Not your partner, not your boss, not your dog, not even your mother (though you may think she wrote the book on how to do it).

Solution: Instead – treat your partner like a human being with their own set of boundaries, values, fears, turn ons, and turn offs. Ask them (again, not in the bedroom!) why they don’t want to get your spooge juice in their mouth – they may have some amazingly good, reasonable things to say about why it’s not okay. Maybe they’ve tried it before and it makes them puke. Maybe they feel humiliated, and don’t want to. Do you REALLY want to be pushing those buttons, my friend? I didn’t think so. However, when you approach it honestly and tactfully, a miracle might occur – your partner may say that they’re nervous about it, or that they have never done it before, or that they worried that you wouldn’t kiss them afterwards…all things that the two of you can talk about openly and that may possibly lead to them giving it a try!

You, in your infinite wisdom, saw how turned on your partner got when they saw that hot bondage scene in the movie last week. You pop open your browser window and proceed to buy hundreds of dollars of hot fetish and bondage gear, and you surprise them by whipping out the cuffs and attaching them semi permanently to the bed in the middle of an otherwise vanilla fuck. You then pop a gag in their mouth, and pull out a whip…only to find that once you come to from the accurately applied knee to the head, they’ve figured out how to voice dial 911 and the cops are breaking in the door to rescue them.

Problem 2: You may be mistaking the source of desire by assuming that what they turn on watching is what they really want to do. Hell, I get my adrenaline all pumped up during car chases, but I’d really rather not drive my truck off a cliff in real life.

Solution: A better way to handle it would be to talk to them about whether they really thought it was hot…and if so, what was hot about it. You may find that it was YOU they were thinking about tying up, rather than vice versa! At best, you’ll find out that they really do want to try the low-down and dirty bondage bit, and your credit card and a high speed internet connection can have you in rope and chain-heaven in a matter of days; most likely, you’ll find that it sparked some sort of interest that, if you both feel safe enough with each other, you can start to learn more about & explore together to see if it really does get you off. Either way, you get to know more about what’s going on in your partner’s hindbrain, and when you’re looking for ways to keep them turned on for you, more knowledge is never a bad thing!

You and your sweetie have talked off and on about the possibility of having sex with other people outside of your relationship. While you’re out of town at a Shriner’s convention, you eschew the obvious professional outlets and decide to approach (and hook up with) a hottie from the bar down the street. In a fit of glee the next morning, you call your partner and tell them about your success with the whole non-monogamy thing…and get the phone slammed down in mid-sentence, with screams of curse words you’ve never heard coming through the earpiece until the “click” happens.

Problem: You never did finish the conversation, did you? You assumed that because your partner didn’t have any big negative comments while you’re discussing it, that they must be okay with you dipping your various parts into the hot tub of extra-relationship sex. Unfortunately, they never actually said “Yes, darling, I think that’s a great idea, and I suggest you hook up with someone next time that you’re out of town”…did they?

Solution: Negotiate, negotiate, and negotiate before making changes in any relationship structure – especially changes that are vital to the emotional and physical workings of either partner. Deciding to do something as significant as opening up the relationship to multiple partners isn’t always the angst-inducing, hair-tearing process that some of us expect, but neither is it something that happens as a result of a single conversation. While you and your love(s) discuss the concept, it should be an “all cards on the table” situation – everyone talks about all their fears, turn ons, philosophical ideals, etc., while also dealing with the reality of the situation and how you can build in time, energy, and boundaries so that everyone’s needs are met and concerns are addressed. Especially in the above situation, you might have wanted to talk to your sweetie before you left town and ask them how they would feel if you hooked up with someone, and been able to understand their concerns before you made the decision to bounce bits with a new person.

Sex for Dummies? Not really...

Communication really isn’t as hard as it seems like it could be – it’s really just a willingness to own up to your own wants, needs, desires, and fears, and to be willing to talk to your partner(s) about those things, listen to their own thoughts, and try to understand where each other is coming from. In the best of all worlds, you start out relationships with good communication skills – but if you’re just now getting up to speed, don’t worry! Most any partner will be thrilled that their sweetie cares enough about them (and about having a mutually fantastic sex life) to actually listen and be open and honest; just keep in mind the suggestions in this article, and keep in mind that your bits are going to reap the benefits of all those good vibes you create!
Tags:
Views: 1147