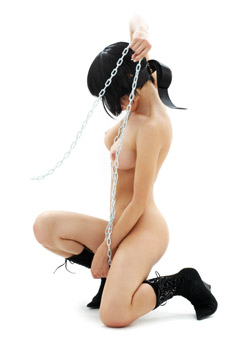 Jack and Bob meet at a kinky party; they go off into a corner where Jack gets whipped for an hour by Bob, wielding a big leather flogger. Yet, somehow, Jack is smiling at the end of it—and the noises he is making sound less like a man being tortured, and more like a man having sex. But why is he enjoying it? What is it about kinky pain that makes it different from regular pain?

Sex, for those of you keeping score, is far more than inserting tab A into slot B. It’s about skill, desire, finesse, pleasure, and intimacy—and all of those ingredients go into making our sexual revelry into the amazing experience that it can become. We come out of a great session of lovemaking glowing, breathless, sweaty (or “dewy”, for those of you that can’t abide the concept of sweating), happy, and often feeling lovey-dovey with the person who got us that way.

So, the concept of why people would get off on BDSM—especially the part about pain and bondage—is a bit nebulous for a lot of folks. And no wonder—they think of a spanking as something that is full of pain, tears and shame; the idea of being tied up and flogged brings to mind torture on ye olde high seas. Yet many aficionados of kinkiness extol the virtues of their vices. They sing the praises of a great caning scene, or a mummification bondage session with even more fervor than the women in the old Herbal Essences commercials (you know, the ones where shampooing becomes an “organic” experience?). So, where’s the disconnect? It’s all in the experience of BDSM on the body and mind—and for some people, it can be quite different internally than it appears from the outside.

First of all, let’s look at what happens inside our bodies and brains when we experience a sensation that is painful. The nerve endings trigger a series of electrical impulses; once they hit the brain, a number of different processes occur. First of all, the pain response goes to various segments of the brain—some evaluate its location, others register its severity. Each of those parts of the brain has its own way of disseminating the stimuli. From there, they work in concert to minimize the discomfort that the body is experiencing while trying to prevent further bodily damage.

Our brains also manufacture intensely powerful chemicals known as endorphins which give our bodies a profound sense of pleasure. They are released during a number of states—pain, exercise, excitement, and, yes—orgasms. These chemicals are responsible for the so-called runner’s high endorphin rush that many athletes crave; they also are the drug of choice for people who engage in exhilarating activities like skydiving, rock-climbing, or bungee jumping. During a lengthy physical scene—whether it’s a riding crop to the bottom, a set of clamps with light weights attached, or a full-on whipping—the endorphins begin by diluting the pain, and continue to keep the body going even when the usual limits of endurance are surpassed. Often, this creates an experience called subspace by the folks on the bottom side of the session—they experience feelings of painlessness, exhilaration, and a kind of transcendence (that are similar to those reported by athletes during lengthy workouts).

Researchers have also recently determined that the reward pathway of the brain is triggered when our bodies experience pain. When pain is detected, this reward pathway is responsible for the release of both opioids (which are morphine-like substances that are produced within the body) and dopamine (which provides a tremendous sense of well being). And once these chemical agents begin to circulate, not only does the experience of the pain become less significant, but our bodies may actually experience positive charges of elation or relaxation, which in turn can induce a sublime feeling of pleasure. As an article on the subject states, “Under other conditions, it's possible that a painful stimulus…might itself be experienced as rewarding”.

Turn on, tune in…

The way we experience pain is also influenced by our surroundings, our expectations, and even our emotional states. In general, the more sexually aroused someone is, the less likely they are to perceive a sensation as painful—which is why many people on the swinging end of the whip take pains of their own to ensure that their partner is at least somewhat aroused before escalating the scene. Ever notice that you don’t mind a little extra discomfort, or that you need more of a particular sensation in order for it to do the job (such as, more intensely applied nipple stimulation) as you get closer to orgasm? Because of that coalescence of pleasure and pain, the brain and nerves get a little mixed-up at that point.

So how does all this figure into that kinky play session? Let’s look at it from a wide-angle viewpoint, encompassing what we now know about the brain/body connection and the response to various stimuli:

Jack approaches Bob about engaging in some BDSM play. Jack thinks Bob is pretty hot—and Bob would love to engage in some naughtiness with Jack, so they start negotiating. As they talk about what they each want, Jack begins comparing different activities and imagines whether or not he’d like Bob to explore them; he decides that he’s not interested in bondage but that he’d love to experience being flogged with a wide, soft leather flogger that Bob hands him to examine. Jack is starting to feel more excited about the scene—Bob obviously knows his toys, and he is visibly turned on by the conversation, which gets Jack even more…well, jacked up!

Inside of Jack’s brain, he is already starting to imagine the sensation of flogging as something erotic and desirable. His sexual response cycle (while perhaps not visually evident) is bathing his neurons in some of the feel-good chemicals that will help his body perceive the flogging as less painful than it may actually be. As the scene starts, Jack’s body responds to the lashes by releasing even more chemicals such as opioids which prolong his arousal, along with the endorphins that help his body sustain a greater intensity as Bob continues to flog him. Bob, of course, is an experienced top who understands how the body reacts to sensation, so he takes his sweet time with the session—he starts slowly with lighter strokes, and encourages Jack’s increasing state of excitement by stroking his skin occasionally with his fingertips, or telling him how sexy his ass looks while it’s getting flogged. He also takes time every few minutes to slow things down a bit, which helps Jack’s body adapt to the increasing sensation and process it more fully. By the end of the session, Jack feels elated—his skin is highly sensitive from the flogging; emotionally, he is in the throes of an endorphin-induced euphoria , and he likely feels more connected to Jack and is looking forward to coming down from the scene with him. Jack is also feeling euphoric, since he’s been working out for the past hour, and is delighted to spend more time touching Bob—this time, without the flogger.

So, Bob and Jack have shared in a mutually rewarding experience—they’ve involved sensation that is strong but is not harmful, they’ve both gotten a chance to add in other fetishes or fantasies (maybe Jack asked Bob to be rough within the negotiated limits of the scene, which helped Jack to experience the feeling of being vulnerable; or maybe Jack really got off on Bob wearing black leather chaps), and they’ve gotten a chance to take a journey together through taboo territory and come back from it feeling physically and emotionally fantastic. And the best part of all? They got a chance to get to know each other in a visceral way that, for many BDSM devotees, is more intimate than that standard tab A into slot B type of sex.

And if you think that sounds unrealistic? Well, you don’t know Jack!
Tags:
Views: 3729
Related articles