Thug Life: Punching, Kicking, and Takedowns as a Way to Do S/M 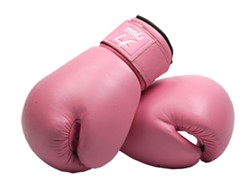 Fight Club. Rugby. MMA. Let’s face it—we live in a society where it’s okay to be physically combative in a competition for superiority. But what happens when the fighting takes on an overtly kinky overtone? You’ve got what some refer to as Rough Body Play, or “Thug Play”—an old fashioned beatdown, not to the death, but until someone gets tired or cries “uncle.”

A History of Violence

I pulled my SAP gloves out of my toy bag—they’re leather gloves with the back of the hand padded with lead shot, to make impacts take on a whole new level of power (as a smaller-bodied woman, I need the extra weight in order for my blows carry the authority that I want them to). I walked over to my play date, a guy I’d been flirting with all weekend at the event, and ran my leather-gloved fingers over his chest. “Is there anywhere I shouldn’t hit you? Anything you don’t want me to do?” I asked, watching his eyes and his face, looking for a response.

“No, just no gut punching,” he replied, looking me squarely in the eye, yet obviously a bit entranced already.

“Good,” I said, and quickly gave him a moderately heavy punch on his pecs, to let him know that it was ON. Those beautiful brown eyes opened a bit wider, his nostrils flared in surprise, and I felt my “sadist” light go on. The second strike was heavier…

As a top (or the person that’s leading the action of the scene), I’ve enjoyed punching and physical beating for a number of years. My first exposure to it was watching one of my friends use her bare feet to beat the man she was playing with, using martial arts-style kicks and the top of her foot to deliver strikes to his ass and thighs. I was immediately caught up in the sight and sound of it—her grunts as she landed each blow, and his gasps as he took in the sensation and processed it, curling in on himself even as he exposed other parts of his body for her ungentle attentions.

I had never seen people consensually play with physical violence like that—on the surface, it looked like a nonconsensual attack. However, beneath that, there was a very different dynamic. The top was obviously riding a high of power and dominance, and yet, still very much in control of her actions and precise in both the location and force of her hits. The bottom was surrendering to the top, and even though it looked like he had no option, he most definitely could have stopped the scene at any second just by speaking his safeword or using a pre-arranged movement or gesture to say “stop.”

Once I explored it a bit myself, I found that rough physical play like this tapped into my body and brain in some ways that other forms of play don’t or can’t. There’s an almost inborn fear of physical violence—for most of us, it symbolizes the most personalized attack possible, and is often thought of in terms of abuse, or bullying, or hate crime. By putting my partner in a position where I know that they will experience fear, I’m allowed an opportunity to create psychodrama for them to explore that fear; similarly, as a top, I’m creating a role for myself to explore being the “bad guy,” to deal with the shadow side of my own spirit, and perhaps even to confront my inner demons of the misuse of personal power in the past.

Other tops mention similar effects. Allena, who is an experienced top with rough play (as well as someone who enjoys bottoming to it), says, “I love the feel of doing the forbidden…using my fists and feet in ways that I would have been punished for as a child—or even as an adult.”

Julie also talks about her emotional reactions to her role as sadistic top: “I love feeling someone take in my energy (in a very physical way)—it leaves me feeling grateful. Sometimes, it also frightens me, to see how much I am willing or want to push someone.”

A few years ago, I asked an infamously sadistic top to play. Over dinner, he asked a question about a surgery that I’d had a few years ago. After I replied that it wasn’t a problem, he said, “So, I can punch you in the stomach, then?” The idea of being gut-punched startled me in a profound way, one that I wasn’t willing to leave unexplored.

The scene that night was, to the observer, nothing but a full-throttle beat down. He pinned me down with his knees while punching me over most of my body. He berated me for being soft, for my ineffectual attempts at hitting back. He said that it was over when I called him “Sir.” He picked the one safeword that my pride would keep me from saying unless I really, really meant to end the session. My hair was used to pull me around. My memory around that night is full of snapshots of not just the violence, but the laughter as I baited him once or twice, the profound sense of pride I got when I was able to land a punch or spit in his face once. (Oh, how I paid for those, though!)

The next morning, a photographer who had permission to record the scene showed me photos of everything that happened, and the person that I saw in those photos startled me—a strong, fierce woman, submitting to a beating but never letting it drown the pride in being able to take it “like a guy.”

People who bottom to thug play often bring up the concept of inner strength when asked why they enjoy it. “Once I ‘survive’ an intense impact play scene, I feel like I can take on anything I am dealing with in my ‘real’ life,” says Julie. “The release I get out of thug play carries over into my real life, putting the skirmishes that happen in work and life into perspective.”

Others find that they get off on the adrenaline, the fight-or-flight aspect of the scene. Their body reacts to what is happening with a surge of adrenaline, an attempt to spur the body into action. Often, the fear factor is also triggered, bringing along with that an additional edge of facing danger that can be highly arousing to some people. The body begins to act in ways that we may not expect; some bottoms will try to throw punches, even though they’ve agreed to be passive in the scene. Others may find that it triggers something inside of them that forces their body to submit to it externally, while internally they experience emotional catharsis that is tied into their powerlessness.

An often unexpected facet of rough play is the experience of transcendence of the day-to-day life in a primitive way. “There’s no room in the primalness for any other thoughts,” says K, who both tops and bottoms. “It…really allows me to let go and just feel, the higher brain shuts off and lets the monkey brain do all the work.” This feeling of release and refocus often gives the mind the chance to free itself from “real life” stress and, once the scene (and the processing of the emotional and physical high that comes along with it) is over, we can come back to the day-to-day stressors with more balance and a feeling of strength.

After the play scene was over, I was absolutely exhausted. My arms felt heavy, I was covered in sweat (even though it was a cool day), my breathing was hard, and I felt buzzed from not only the exertion, but from having forced surrender from my partner.

He was exhausted, too. His skin was red and raw in places. He clung to the bottle of water that I handed him with both hands, and he leaned against me with all his weight, relying on me to support him as he recovered.

As both of us slowly came down to earth, we talked about the scene, about things that felt really amazing to us, about the emotions and thoughts that surfaced while we played. We had a chance to learn more about each other. We had dropped enough of the social barriers that we usually keep in place, and gotten a chance to experience each other more openly and honestly. And that was the point of the scene—to create a bond between us that would allow us each to grow individually, as well as become more intimate with each other.
Tags:
Views: 2898
Related articles