I Don’t Want to Be a Lady: Arya Stark in Game of Thrones 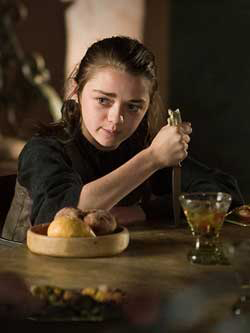 Welcome to what we hope will be the first of many looks at sex and gender as portrayed, plucked and performed on television. To kick things off, we’re going to be looking at the first three episodes of HBO’s fantasy series, Game of Thrones based on the immensely popular A Song of Ice and Fire books by George R.R. Martin.

For the uninitiated, A Song of Ice and Fire is a series of seven high fantasy novels, of which four have seen print. While they include elements like magic, monsters and epic battles, the work is much more focused on personal interactions than traditional sword and sorcery fantasy work. Three episodes in and HBO’s adaptation of the first book, Game of Thrones, is similarly deep and compelling, showcasing the frequently conflicting motivations and responsibilities of the series’ characters.

This series is a great place to start because I’m personally a fan of Martin’s work, and the show’s source material is rife with well-rounded characters for whom sex is frequently used as a tool, shield or even a weapon. In fact, one of the most prominent things that separates the Song of Ice and Fire books from other fantasy literature, such as The Lord of the Rings, is that its characters not only have sex, but for them it is oftentimes a major motivator.


Before we roll up our sleeves with a look at the series, a note about spoilers: Anything that has been seen on the show is going to be fair game for discussion. Additionally, once events have occurred on the show, I’m not going to be shy about comparing and contrasting them with the way the same scenes are handled in the books. But of course, we’ll never spoil anything that hasn’t actually happened on the series yet. There’s your warning, so don’t come crying to us later because you’re letting episodes build up on your DVR.

It’s hard to pick a favorite character in the Song of Ice and Fire books, as Martin gets inside the heads of even the most despicable villains with such a commitment to character that their most heinous acts end up seeming reasonable in context. That being said, amongst a number of fantastic, fascinating characters, Arya, daughter of Ned Stark, is one of the books’ best, and she is shaping up to be just as compelling in the small screen adaptation.

Arya is a tomboy, sitting in stark (yuk, yuk) contrast with her prim, prissy sister Sansa. In the first three episodes of Game of Thrones we’ve seen Arya struggle with the work expected of women in this medieval fantasy setting, specifically knitting, a task at which sister Sansa excels. Meanwhile, Arya exhibits a proclivity for weaponry and combat early in the first episode, showing up her younger brother Bran with her archery skills. So, it should come as no surprise that when given a sword by her half-brother Jon, she christens the blade “Needle,” with a very different type of sewing in mind.

It’s easy and far too reductive to call the blade a phallic symbol, and I’ve been away from college gender theory classes far too long to make a case for Arya as a hermaphroditic character. That said, both Martin and the fine folks behind the Game of Thrones television series use Arya and Needle to do some considerable heavy lifting when it comes to the franchise’s gender issues.

It’s no small wonder that Arya feels a special kinship with her illegitimate half-brother, Jon Snow, as both are outsiders. Just as Jon struggles to find a place within a society that says he doesn’t have one, Arya rejects the female gender roles she is expected to fill. Instead of knitting and making mooneyes at boys like sister Sansa, Arya prefers to run off and practice swordplay with another outsider character: The common-born young son of a butcher, Mycah.

While the book Game of Thrones details the cost Arya has paid back in her home of Winterfell for her less than lady-like pursuits, the worst she has had to suffer is scolding from her nanny/tutor, Septa Mordane. In the second episode, she must pay a much higher price for her nonconformity, however.

When Sansa and her future husband, Prince Joffrey, stumble across Arya and Mycah practicing with sticks in the woods, they are both shocked by the scene that confronts them. Joffrey, eager to impress his betrothed, begins to bully the butcher’s boy. As a response, Arya, having already made transgressions against gender and class roles, compounds both issues by standing up to Joffrey, a scion of the king and a boy, in defense of Mycah.

Things quickly escalate and Arya’s pet direwolf, Nymeria (named after a legendary female warrior, natch) attacks the prince, enabling Arya and Mycah to make their escape. But the two of them cannot truly escape from their transgressions, and as punishment for stepping out of her assigned role, Arya loses both Nymeria, who she must chase away for the beast’s protection, as well as Mycah, who is hunted down and brutally slaughtered by Joffrey’s sworn sword, “The Hound” Sandor Clegane.

But while Sansa is Arya’s diametric opposite, fully embracing her role and future as a noblewoman, she doesn’t get off without punishment. When she rushes to Joffrey’s aide after Nymeria attacks her prince, she is rewarded with only scowls and harsh words, and when Arya’s direwolf cannot be found, Sansa’s pet Lady is put down as a vengeful proxy.

Somewhat shockingly, this all comes in spite of Sansa’s willingness to bend the truth to fit Joffrey’s skewed account of the afternoon’s events. Though her father Ned later explains her actions to Arya, as Sansa having to side with her future husband, it is clear that no matter whether a girl acts like a boy or acts like a lady, in the world of A Song of Ice and Fire, they will surely suffer for it.

Things pick up for Arya by the end of the third episode, however, when Ned Stark catches his daughter playing with Needle. Though he is initially wary of his young daughter wielding a dangerous weapon, he soon relents, allowing her to keep the blade, likely influenced by her pained proclamation, “I don’t want to be a lady.”

Ned hires a special “dancing instructor” for Arya, the Braavosi swordsman known as Syrio Forel, who is given the task of teaching the youngest Stark daughter how to go about her needlework. In contrast with the knights of Westeros (the continent on which the Starks, Baratheons, Lannisters and others struggle for control), the swordsmen of Braavos do not depend upon heavy swords and even heavier armor, instead opting to use their lithe quickness and smaller, one-handed blades such as Arya’s needle.

The Braavosi fighting style that Forel teaches Arya is not just compatible with the girl’s small, thin stature — it actually benefits from it. Learning fencing from Forel becomes the first time that the audience sees Arya truly happy, as it’s the first time that she is able to excel on account of her natural attributes, not in spite of them. Finally, it’s fitting that she is being taught Braavosi Water Dancing, a style that places heavy emphasis on the ability to instantly adapt to any situation, as it’s Arya’s fluidity that is helping her become not a lady, but something different altogether.

Check back in the coming weeks as we continue to look at sex and gender in Game of Thrones. And make sure you know what we’re talking about by watching the show Sunday nights at 9pm on HBO.
Tags:
Views: 1657