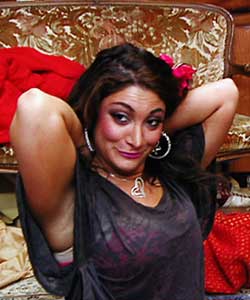 It’s the penultimate episode of Jersey Shore, which means there’s only one week left to watch the Situation, Snooki, et. al. embarrass themselves and America as a whole in one of the world’s most beautiful cities. So before the cast makes it’s triumphant return to Jersey next season, let’s take a look at some of this week’s most fascinating moments, shall we?
No. 5 – It’s a Classic Tale
Boy loves girl, girl thinks she hooked up with a pal, boy forgives girl, girl realizes she was actually blackout drunk and had outright sex with pal. But this week, when confronted with Snooki’s infidelities, Jionni wasn’t entirely sure whether having his nasally voice broadcast to millions of viewers was worth this kind of indignity. Fortunately, he found a way to keep kind of appearing on a hit show while also not being officially attached to Snooks, by basically just saying “I don’t know. Goodbye.”

No. 4 – Sexual Deenasaur
This week we also found out that it’s not just the guys of The Jersey Shore who verge on date rape with their courting ritual. In her valiant, though unsuccessful efforts to “do sex” with Pauly D. Deena was aggressive enough to do any collegiate Greek scene proud. In her defense, however, if Pauly D. didn’t want that kind of attention, he shouldn’t strut around in such a nice, freshly pressed t-shirt.

No. 3 – Guido Problems
Speaking of which, the housemates were so busy desperately trying to get their new catchphrase “Guido/Guidette/Meatballs Problems” over (kind of a Northeastern version of “You Might Be a Redneck…”), that they totally ignored one of the biggest Guido problems: That their idea of getting “decked out” is a plain white t-shirt, shiny oxfords with jeans, booty shorts and furry boots.

No. 2 - Shameless
Frankly, we’re shocked that it took eleven episodes to get to this point, but we finally got to see Italy lash out at the housemates, as a group of not-at-all-incorrect Italians began chanting “Shame!” at the Situation, which interestingly, marks the first and likely only time we’ll ever see shame on Jersey Shore.

No. 1 – Anti-Meatball-ites
But the Situation wasn’t the only one to incur the wrath of the motherland, as while at a club, Snooki and Deena were subjected to some well-earned abuse of their own. After suddenly deciding that they don’t like it when guys objectify and laugh at them while dancing extremely close, the two self-professed Meatballs got a handful of ice thrown at them by a bartender. Naturally, and classy as ever, the two’s cool-headed response involved breaking every bottle in site before getting dragged out by a bouncer.

Special Bonus Entry – Of Course Vinnie’s the Bottom
This week’s episode was truly an embarrassment of riches, in more ways than one, as we were once again treated to the increasingly less latent homoeroticism of the show’s male castmembers. Sans context, we were treated to Vinnie climbing in bed with Pauly and kind-of-maybe-sort-of cuddling a bit before making obvious jokes about fucking one another. The most fascinating part, however? That the housemates possess and actually know what condoms are for.

And that’s not even everything – we didn’t have enough space to even start talking about how much everyone hates the Situation or the time Deena and Snooki dressed up like prostitutes and went out drinking at 7:30 in the AM. Did we miss anything else? Tell us in the comments below, then make sure to watch the last episode of Jersey Shore on MTV this Thursday at 10 pm, and check back here for another rundown.
Tags:
Views: 1125
Related articles