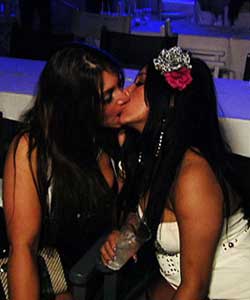 Jersey Shore just gets better and better, doesn’t it? We honestly thought the show had peaked a couple seasons back, and that the cast’s trip to Florence was just a last-ditch gimmicky effort to become fun and shocking again.
Clearly, we were eight types of mistaken, as this week’s episode of the show is probably our favorite ever – and no one even got into a fight! That, my friends, is the absolutely hilarious, endlessly entertaining potential of serious, debilitating alcohol abuse.

Let’s get into the list before we black out and show our cooka to everyone:

No. 5 – Junk in the Trunk If you’re a regular viewer of the show, it’s no big news that despite performing masculinity more hyperbolically than practically anyone this side of late-'80s George Michael, The Situation has more than a few feminine tendencies. This week, the eyebrow waxing, the absurd amount of facial products and the need to play Italian Mama by cooking for everyone were joined by the absolutely mind-boggling amount of luggage Mike brought along for a weekend trip to the beach.

No. 4 – Too Aggro, Bro Say what you will about him, but Pauly D. is charming as hell and kind of hilarious. Yeah, his silly catchphrases and shouting delivery have something to do with it, but the cast member also has a certain unquantifiable je ne sais quois that people like Ronnie just don’t have. So, when Ron-Ron tries to “swack” Mr. D’s bits, shouting at girls outside the pizza shop through a megaphone and shaking people’s beds to wake them up, it just comes off as the terrifying chest-beating of a date-raping gorilla.

No. 3 – JWhat Happened to JWoww? We aren’t going to lie: We used to have kind of a thing for JWoww. Sure, if we saw her in real life, we’d probably be too terrified and/or intimidated to say anything, but she was kind of a really foxy looking chick. But between seasons three and four of the show, JWoww apparently subscribed to the Megan Fox-school of aesthetics, transforming herself into a too-skinny, skeleton-faced parody of what women, drag queens and Michael Bay think men find attractive.

No. 2 – Drink, Drank, Drunk Alcohol abuse is nothing new on Jersey Shore, or any reality show to be honest, but this week’s episode took things to new levels. Snooki and Deena got wicked drunk, which is pretty much par for the course, but what was new was how utterly horrified the rest of the cast was. When the same people who have three-way kissed in clubs, peed behind bushes, gotten in drunken fights on the boardwalk and more think you have a problem, it’s probably time to go home and put some underwear on, madam. That said, “I see straight vageen” is probably our new favorite quote from the show.

No. 1 – Lesbehonest Redux Our old favorite phrase, “Lesbehonest” popped it’s beautiful little head up this week as well, when Snooki and Deena got so drunk that they blacked out and started making out at the club. Followed by making out in the car on the way home, making out at home, making out at the covers, and maybe something a little more. Once again, the other cast members were legit disgusted, as even Pauly (who’s made out with Deena) and Vinnie (who’s had sex with both Snooki and a different girl who’s hooked up with Deena) didn’t get turned on by the hot-mess mash-up. JWoww took the not-so-topical reference right out of our mouths as she wished for one of the mind-erasing devices from the 1997 film “Men in Black.”

Did we get too drunk and miss anything else good? Tell us in the comments below, then make sure to watch Jersey Shore on MTV this Thursday at 10 pm, and check back here for another rundown.
Tags:
Views: 1336