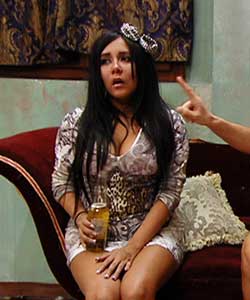 On last week’s Jersey Shore, Snooki’s boyfriend Jionni was shocked – shocked, we tell you – to find out that his beloved, a woman paid to get blackout drunk and have sex on television, had such a lack of propriety that she would show her underwear at a bar. While this week’s episode mostly dealt with the fallout from Jionni wandering off into Florence, completely alone except for a dedicated camera crew, there were still more than enough fascinating moments to keep us from missing Karma too much.

No. 5 – There’s a Tear in Her Beer
Snooki started off this week’s episode of Jersey Shore very upset. How upset was she? So upset that the only thing that she could possibly think about doing the morning (afternoon, more likely) after completely blowing up her relationship due to alcohol abuse, was, naturally, to go to a restaurant by herself, drink, dance and demand that the music be turned up. In case her grief wasn’t clearly enough on display, the scene was intercut with video of poor Snooki crying and claiming, “I’m heartbroken now, so let me dance.”

No. 4 – Jersey Mama?
This week’s episode also featured one of the most terrifying moments in the history of the show, as for a horrifying few moments, viewers were led to believe that the next generation of reality television stars might be growing inside Deena’s belly. Deena had been feeling emotional and dizzy for the entire season, and while we chalked that up to being drunk on television 24/7, apparently it’s also a sign of pregnancy. What’s truly odd, however, is that Deena was so worried about what her parents would think about her getting knocked up, while she remains completely unconcerned about what they think about her hooking up with absolutely anything – when she’s not drunkenly falling on her face of course.

No. 3 – Seeing Double
For the past few episodes we’ve been mercifully spared any Sam and Ronnie relationship drama. But nature abhors a vacuum, so this week we watched as Snooki and Jionni took their place, as a couple of horrible people repeatedly treating one another horribly in the hopes that it will translate to more screen time. We weren’t the only ones to notice the similarities, however, as JWoww, ever the voice of reason, started calling Snooki “Sam.” We were unable to tell whether this upset Sam, or if that was just her baseline slack-jawed sneer.

No. 2 – Motiveless Malignity
We’re delighted that The Situation has finally fully embraced his role as the villain of Jersey Shore. For absolutely no reason we can discern, Mike seems committed to ruining the lives and relationships of those around him – he’s like a greasy, tracksuit-wearing Iago. Wearing his third outfit of a night that consisted of pretending the living room is a club in Jersey, instead of, oh, we don’t know, actually going out and enjoying Italy, Mike set about trying to completely explode what remains of Snooki and Jionni’s relationship. The Situation claims that when Snooki walked in on his friend banging Snooki’s pal Ryder, she immediately started fellating her housemate. We guess that seems within the realm of possibility, but we’re still a little unclear on what Mike was doing in the room while Ryder and his pal were “doing sex.” Probably just sitting in a chair leering.

No. 1 – Snooki is the Worst
Last week, it looked like someone – probably JWoww – was finally going to step in and tell Snooki that she has a problem, and that it’s no mystery why Jionni left her drunk ass at a bar. Thankfully, the producers of Jersey Shore must have stepped in, explaining to Ms. Woww that if Snooki were to stop drinking, behave respectably and maintain a healthy relationship, they would no longer be able to afford all the absurdly oversized hats and glasses they’re so fond of.

Amazingly, we’re already done listing our favorite five moments, and didn’t even get a chance to talk about Vinnie rubbing his penis on Deena, Deena trying to get Pauly D. to do the same or Vinnie shockingly having sex with Snooki, just as he has on every other season of the show.

Did we miss anything else? Tell us in the comments below, then make sure to watch Jersey Shore on MTV this Thursday at 10 pm, and check back here for another rundown.
Tags:
Views: 1078
Related articles