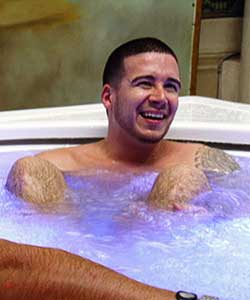 We expect there to be sex and drama on Jersey Shore. It's Jersey Shore! But sometimes they come up with stuff we just can't quite believe, that we just can't stop watching...and just can't stop talking about.
So far, as part of SexIs Magazine’s continuing coverage of popular television shows we examined things like the differences between Cersei and Daenerys in Game of Thrones as well as the role of witches in True Blood. Now, for the first time, however, we’re branching out into reality television, with Jersey Shore.

Naturally, Jersey Shore doesn’t carry the thematic weight of a scripted program, but from a sex and gender (and maybe even anthropological) perspective, it’s an absolutely fascinating hour of television. So, instead of weekly in-depth looks at single issues, we’ll be bringing you a list of the top five things that fascinated us about each episode. If you’ve seen any of the show’s three previous seasons, you’ll know that we have some hard choices ahead of us. So let’s go!

No. 5 – Mike’s New Jack Swing It’s no secret that Mike “The Situation” Sorrentino is kind of a creep, but in Jersey Shore’s fourth season it seems like he’s really embraced it. In this episode he goes hard at Snooki once he finds out she has a boyfriend, then proceeds to bring home one of the thousands of dopey American college students infesting Florence. Then, later he makes a failed attempt to snuggle with another roommate, Deena. For an unabashed horndog, Sitch definitely loves to cuddle, but what’s most stunning/terrifying is the Boyz II Men-style cane he’s brandishing when he tries to climb in bed with Deena.

No. 4 – Of course they are While the Situation guns for Snooki and we brace ourselves for more insufferable Ronnie and Sammi storylines, this season’s most interesting potential romance is between Pauly and Deena. This week’s episode started with the two making out at a club, with a pained, horrified expression plastered on Paul’s face the entire time. Later, Deena’s roommates expressed concern that Deena might develop feelings for Pauly and get hurt, a sentiment Pauly expressed as well, pointing it out as a feminine trait to get hung up on “smooshing.” Interesting though, while Situation and Snooki reportedly had sex during the off-season, Sitch is the only one who appears hung up on it.

No. 3 – “She’s too young for you, bro!” This week’s painfully forced attempt at coming up with a new GTL-style catchphrase was, of course, “She’s too young for you, bro!” In Pauly and Vinnie’s defense, they were probably drunk as hell when they came up with it, but it still doesn’t excuse the absolutely pedestrian nature of their new Foxworthy-esque running gag. What we found most fascinating, however, is the remarkable level of shame and self-awareness exhibited by the guys, in not wanting to hook up with too young of girls. Or maybe the producers just briefed them on what Italian prisons are like.

No. 2 – Dick Soup What’s the opposite of gay panic? If there’s not a name for when two straight guys act or talk gay for their own amusement, there absolutely should be, because it’s extremely common. On Jersey Shore this week, one of our favorite moments was a throwaway bit with Ronnie and Vinnie enjoying some Jacuzzi time together, while discussing how romantic it could be, but totally not with us in here together, bro.

No. 1 – Ladies of the house One of the most fascinating recurring elements of gender roles as played out on Jersey Shore, and one that we’ll likely be returning to over the coming weeks, is who does the cooking in the house. Obviously, there’s nothing wrong with a man who cooks, or a woman who doesn’t cook, but there’s something very interesting about how the dudes on Jersey Shore, who cultivate a comically hyper-masculine, maybe even chauvinist, image for themselves, just love to roll up their sleeves in the kitchen. On the other hand, the girls are absolutely clueless when it comes to making a meal, as seen when poor Sammi, confused about some strange little strawberries, was informed that what she’s holding in her hands are actually raspberries. She’s a keeper.

Did we miss anything? What were your favorite moments of this week’s Jersey Shore? Catch the show every Thursday at 10pm on MTV, or on one of its unavoidable reruns, then check back with us next week for another Top Five!
Tags:
Views: 1127
Related articles