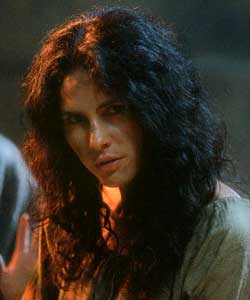 The witches on True Blood take distinctively different role than the vampires on the show, expressing an historically feminine mythical power: mind control.
After watching the best, most exciting episode of what has been a somewhat trying season, we’re back with another look at sex and gender issues in HBO’s True Blood. If you like what you see, make sure to check out our earlier articles, which include a discussion of the show’s sexual conservatism, Sookie’s dual nature and more.

We explored the True Blood’s witches a few weeks back, looking at the ways in which they represented a feminine response to aggressive, masculine sexuality, which included, of course, mentally castrating Eric. But seeing as how central Marnie and the rest of her practicing Wiccans have become to the show’s plot, and the developments of last night, we think that the witches of True Blood deserve a little more discussion.

Since we first wrote about the struggle between witches and vampires, we’ve learned that Antonia, the witch possessing Marnie, was raped by vampires in her former life, which mirrors Tara’s own experience with the bloodsuckers. More importantly, however, is Antonia/Marnie’s response to the vampire threat: Mind control.

Just as the vampires of True Blood embody the worst, most feared aspects of male sexuality (physical aggression and rape perpetrated by a more physically powerful attacker), the witches themselves display abilities that are often attributed to female sexuality, albeit in less literal ways. Though the witches cannot hope to overpower their attackers physically, they nonetheless pose a clear threat to the vampires, due to their ability to force them to act against their will.

The idea that women can somehow control the minds of men is not anything new, and in fact, has been used by various religious groups as an excuse for the oppression of women for centuries, if not longer. In fact, it’s often the root fear that leads to accusations of witchcraft and the occult – the idea that women can somehow force men to act against their own will, just as Eve first seduced Adam into sin.

But unlike many examples of the “mind controlling woman” trope, Marnie and friends are understandable, if not completely justified, in their actions. When True Blood is at its best is when the show turns accepted notions of sex and gender on their heads, steps back and watches what happens – like pairing Hoyt up with virginal vampire Jessica. Here, True Blood allows its witches to reappropriate a trope often used to misogynistic ends, and instead offers it as an opportunity to empower women with a way to defend themselves from a previously unbeatable threat.

What do you think about the characterization of the witches in True Blood? Is giving the very feminine group mind control powers simply an extension of a misogynistic trope, or does it go beyond cliché by giving the ability a positive spin, and arguable noble goal?

Make sure to tell us what you think in the comments below, and then clear time in your schedule to watch True Blood this Sunday at 9pm on HBO. We’ll be back here next Monday to talk about the show and hear your thoughts.
Tags:
Views: 1098
Related articles