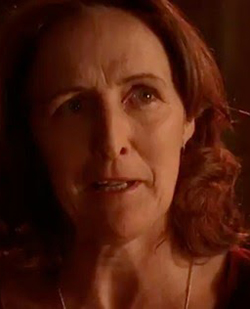 Welcome back to our ongoing look at sex and gender issues in HBO’s True Blood. If this is the first of our series that you’ve had the chance to read, make sure to check out some of our previous entries, like our discussion of Tara’s transformation into a cagefighting lesbian as well as Sookie’s dual nature.

Just as season two of True Blood was devoted to maenads, season four is becoming more and more focused on witches (and werepanthers naturally, but that’s an issue for another column). When it comes to sex and gender issues, witches are as ripe for discussion as vampires, largely due to their link to female empowerment and the masculine fear of the same.

Unlike Maryann, season two’s maenad, who worships a masculine horned god a la Baphomet, Marnie and the other Wiccans of season four are devoted to “the goddess” (if she’s been named, we missed it – enlighten us in the comments!). As the group gains its power from a female deity, it should come as no surprise that their first big “experiment” was giving life, as when they reanimated the corpse of a dead bird.

With the power to banish death and foster life at the witches’ disposal, it’s no wonder that Bill Compton is concerned enough to send Eric Northman to deal with the coven. Like most vampires in the series, Eric has displayed a remarkably open pansexuality, but despite his openness, he remains a distinctly masculine figure. Tall, Nordic, forceful and violent, despite his in-progress face turn, Eric is one of the most threatening entities on True Blood, with much of his menace an outgrowth of his masculine traits.

So when the coven vanquishes Eric by wiping his memory, it’s more than just a chance to see Alexander Skarsgård shirtless: It’s a profound message about women’s ability to defuse masculine, anger-motivated drive. In the most recent episode of True Blood, “I’m Alive and on Fire,” a smaller subgroup of the coven is confronted by Eric’s protégé, Pam. The group consists of Marnie, Lafayette, Jesus and Tara, i.e. a powerful worshipper of the goddess, two gay men and a bisexual woman.

Ep. 40 Clip - Marnie Is Asked to Reverse the Spell


Pam is a less masculine threat than Eric (though an argument could easily be made that all vampires, being predators, are sexually more manly than feminine), but the symbolism of those opposing her still holds. Further driving the point home is that Marnie seems to be communing with and gaining power from a powerful witch of the past, who was burned at the stake by a couple of powerful religious leaders. Naturally, those leaders were not only men, but their language made it clear that they had a disdain for not only the magic the witch wielded, but her femininity itself.

During that same scene, Tara puts an even finer point on the threat that vampires pose to the coven and herself by pointing out that Eric and his cronies won’t just kill them, they’ll also rape them. This, of course, is a reference to Tara’s horrifying ordeal with Franklin last season, positioning the coven as a survivor’s group of those who have experienced the uninhibited, violent sexuality and/or rage of masculine vampires.

What do you think that the coven says about female sexuality and its relationship to the oppressive masculinity of True Blood’s vampires? Is the group empowering itself or simply another set of victims?

Make sure to leave your thoughts in the comments below and catch True Blood on Sunday nights at 9pm on HBO, then check back with us here on Monday to discuss the show.
Tags:
Views: 1031
Related articles