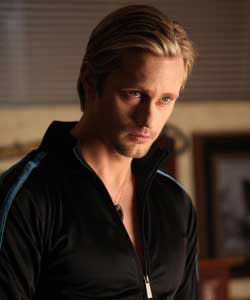 Welcome back to another look at sex and gender issues in HBO’s True Blood. If you’re new to our series of articles, make sure to check out some of our previous installments, including a discussion of the show’s sexual conservatism, Sookie’s dual nature and a closer look at True Blood’s witches.

After seasons of waiting, hinting and teasing, it finally happened last night: Sookie hooked up with Eric. Yes, they had kissed and even shared blood previously, but this was the first time that they really consummated an attraction that has been evident since Alexander Skarsgård’s Eric Northman first spotted Anna Paquin’s Sookie Stackhouse at Fangtasia. While the moment itself was a good payoff and a great way to develop the love triangle that also includes Stephen Moyer’s Bill Compton, we can’t lie, we’re a little disappointed with what the development could mean for our favorite Viking bloodsucker.

For three seasons, Sookie largely despised Eric, as he represented the harsh, nasty side of vampirism, a stark contrast from Bill’s loving romanticism. But this season, we saw Eric get his memory wiped by a coven of witches, leaving him helpless, scared and suddenly, not so threatening anymore. Initially, the transformation was played for laughs, and made for some great moments, but now, the show appears to be playing the newly toothless (metaphorically speaking) Eric largely straight, as the most gentle, caring and kind vampire this side of the Mississippi.

The problem, of course, is that what made Eric so interesting and compelling as a character and romantic interest has now been completely jettisoned. Interestingly, this isn’t an uncommon plot route for a television show to take when a female protagonist finds herself torn between the good guy she was initially with and an alluring, menacing heel. For a very similar example that even includes vampires, we have to look no further than Buffy the Vampire Slayer.

Sarah Michelle Gellar’s Buffy initially fell in love with the dark-haired vampire known as Angel, and together fought the blond Spike. But as the show wore on, Buffy and Angel grew apart, while Spike and she struck up their own relationship. Initially, there was a lot of drama to mine there, as Buffy was hooking up with someone who as recently as a season ago, was hell-bent on killing her and overrunning the world with vampires. But eventually the show had to deal with the fact that unless one or both characters changed, there was no reason for their relationship to continue.

This resulted in Spike being de-eviled and becoming a part of Buffy’s core group of friends, and like Eric, losing much of what made him appealing to viewers in the first place. Similar, and somewhat nerdier references can be seen in Dragon Ball Z (the vicious Vegeta settling down with Bulma) and even in the X-Men comics (the Jean Grey, Cyclops and Wolverine love triangle). It becomes increasingly difficult to keep fan-favorite harsh, vicious or even evil characters beloved when they happen to fall in love with the good girl.

There are certainly ways out of the predicament, especially with the new, nicer Eric Northman coming as a result of a magic spell, not any kind of character growth. But those are tricky waters to navigate, especially now that Eric and Sookie have actually hooked up. For our money, we’re really hoping that Eric gets restored to his cool and cruel self sooner rather than later.

What do you think about the kinder, gentler Eric Northman? Make sure to tell us below in the comments, then catch True Blood this Sunday at 9pm on HBO and meet us back here on Monday to talk about the show.
Tags:
Views: 1048
Related articles