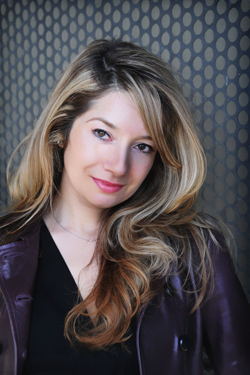 You are planning to marry the perfect man, or so you think...but what do you do when your fiance comes out as a homosexual? Kiri Blakeley tells all in her just-released book.
After 10 years, Kiri Blakeley found herself in a position no woman wants to be in: Her fiancé, Aaron, was leaving her—because he was gay. In her moving, raw and humorous memoir Can’t Think Straight: A Memoir of Mixed-Up Love (Citadel Press), the 40-year-old Forbes writer (who’s currently in another relationship) reveals what it was like to find herself suddenly back in the dating world.

You contrast the dating scene from your twenties with being out in the dating world 10 years later. What were the biggest changes you noticed?

To be honest, I did not date much in my twenties. I was one of those weird girls who stayed home and wrote on Saturday nights. I hung out with my grandfather on the weekends. So, the real differences I noticed were in the technology. For instance, in my teens and twenties, if I liked a guy, I could call him and hang up on him. Now you can’t do that. My first lesson that the dating world had changed was when I wouldn’t give a guy my number, and he invented some excuse to use my cell phone. He then called his own phone and got my number. I actually had no idea about stuff like that!

One of the most compelling people describe in your book is James. You wrote: “For James, and men like him, fucking a girl was like watching a movie—something to do to pass the time.” You admit that when you started dating again, you were like that too—at first. Was that important because you felt you missed out on something by meeting Aaron so early?

I met Aaron when I was 26, so it wasn’t that early, but I had not dated much before him. I lost my virginity very late, at 24. I never was the type to sleep around. So yes, suddenly, when I got out of this relationship, I felt the need to go a bit wild.

You admit that you had something of an addiction to James, “I couldn’t open myself up to other men when I was this attached to him. Goddamn the female DNA.” That seems to be an ongoing theme in Can’t Think Straight—you want to have casual sex, since for the first time in a decade you can, but it winds up being more complicated than “casual” would imply.

It sort of sucks for us, but study after study has shown that men and women think and feel differently about sex, and that women are much less capable of having casual sexual flings without getting emotional about them. 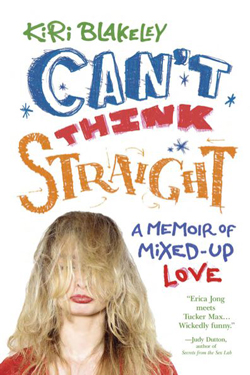 And anecdotally, I have several female friends struggling with their developing feelings towards men they’ve begun having casual sex with. I have no guy friends who have this issue.

How did having Aaron come out after such a long time affect your views on sexual orientation?

I think it can morph. I believe in the Kinsey scale. I don’t think this was a situation where he was full-on gay our entire relationship. After all, we’d had sex for years, and he never had trouble getting it up. I knew of ex-girlfriends of his. I’d seen diary entries where he mooned over other women from long ago. But he began having sexual feelings toward men, and then those feelings got stronger and stronger.

He’s now gay and lives with a man. Could he go back to women? Maybe. Who knows?

Some gay men are born gay and from the second they can walk, aren’t interested in women. This wasn’t the case with Aaron. Sexual orientation can be more gray area than we’d like to think. Because, yeah, it's scary to think that your significant other can morph like that. But they can!

Do you have any advice to women about trying to figure out if a crush or boyfriend or husband might be gay?

I’m the last person who would have that advice, because I was totally fooled! My gaydar is completely off. My ex seemed very straight. I was not engaged to Clay Aiken! So, no. However, I would say that if your sex life is lacking, there is something off, but it could be anything.

You wrote: “I’m amazed how solicitous guys are in the beginning—when they know virtually nothing about you.” What advice would you have for guys when it comes to dating?

I guess I’d just tell them to be a little more careful in the beginning, when they are acutely infatuated. You know, be a little less quick to make plans for the future or offer up flowery compliments. Because, after a month, if you don’t feel the same, you can backtrack without the girl feeling so confused.

Also, women aren’t as fragile as you think. Yes, we cry. We do yell a bit. But we’re not going to jump off a bridge if you say you don’t want to see us anymore.

Don’t just disappear. If there’s been more than two or three dates, or you’ve slept together, and you don’t want to see us anymore, just say so. We can handle it, I promise! Otherwise, we wonder what we did wrong, or if you are lying dead in a gutter somewhere. Women are natural worriers.

A recent review called Can’t Think Straight a “slut-fest.” What do you think of that label?

Hahahahahaha. Misogynist. Let’s see…I had sex with three men through the course of a year, and had two “intimate” encounters. Maybe this female critic hasn’t been out there for a while, because that doesn’t seem a lot to me.

But I get why she said it, because I described things frankly and honestly. If I’d said, “And then we kissed”…fade out—I don’t think anyone would think it’s a slut-fest. However, my one and only goal with the book was to be honest. So I felt I needed to be honest with the reader about my experiences. But I didn’t want to be pornographic or superfluous either, so it was a balancing act.

What’s next for you?

Not sure. Got any ideas?
Tags:
Views: 1376
Related articles