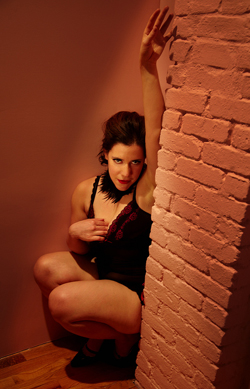 By Constance and Eric
Gossips love to speculate that strip club visits equal marital doom, whereas I don't think you can infer anything from a strip club visit other than that a guy likes to look at scantily clad women.
News broke recently that Dallas Mavericks basketball player Lamar Odom was seen at a strip club, prompting rumors that his marriage to reality TV star Khloé Kardashian is in trouble. I use them as an example not simply because I could call this column "Sex and the Kardashians," since I mention them so much, but because they're the latest celebrity couple to be put to the strip club media scrutiny test, though surely won't be the last.

I obviously have no clue about the state of their marriage, but the idea that just because a man visits a strip club, he's not interested in his wife, is ludicrous. I've been on dates to strip clubs, and enjoyed the dual acts of voyeurism and exhibitionism — watching the dancers, and being watched when I got a lap dance. Plenty of couples go to strip clubs together, and I'd think we've moved on from the idea that strip club patrons are only men. Yes, I'm bisexual, so that makes me more inclined to be into the idea of visiting a strip club than a straight woman, but there are plenty of straight women who enjoy strip clubs as well (I'm only addressing female dancers in this column, though there are male dancers as well).

One of my very first erotica stories was called "Lap Dance Lust," and it was a true account of the first lap dance I ever received, at Cheetah's in Los Angeles. I was giddy with excitement and nerves; what does one do when getting a lap dance? How do you ask for one? The women were so glamorous that I was intimidated, but that added to my excitement. I wound up getting an incredibly sexy dance, and what I like about the story is that there's absolutely no sex in it, not even a kiss, but there are all the elements that make a lap dance so exciting: the tension, the touching, the eye contact, the breathing, the music. I was floating on air the rest of my trip because of it.

There are many reasons someone might go to a strip club — for dinner (or lunch, which I find amusing), for entertainment, to ogle, to socialize, to flirt, for a bachelor party, to get a lap dance — or more. Yes, there is the possibility that your spouse or partner is doing something at a strip club that might make you uncomfortable, but there's also the very real possibility that Kardashian and Odom, or any other couple, have an agreement about what's acceptable and what's not.

Personally, I'd think it was hot if I was dating someone and they went to a strip club, then told me all about it, down to every last sexy detail. I'd consider it an opportunity to hear about a lover's interactions with another woman he (or she) is attracted to in a way that's abstract enough so as not to make me jealous. I would be more uncomfortable if they said, "Let me tell you about my drop-dead gorgeous coworker" and proceeded to describe a woman who I felt outclassed by. But if he described a stripper, I wouldn't feel "in competition" with her because her job and mine are different. She is providing a fantasy, for money, and if she's good at her job, she'll earn every cent. If I had plans one night and a partner went to a strip club, got all hot and bothered, then returned to me to put that arousal to good use, I'd be overjoyed. It would only get awkward if it became compulsive, and, say, he wanted to go there every night, or could only get off thinking about a given stripper. Otherwise I would welcome a partner with an interest in strip clubs, partly because I'm somewhat of a mental voyeur — I get off on hearing about people's fantasies — but also because it would be an outlet for them separate from me. I don't expect to be able to fulfill my partner's every sexual urge or impulse, and if visiting strip clubs is one way to incorporate their erotic desires into a larger set of activities, I'm all for it.

According to The Plunge, because lap dances don't involve sexual contact they're "frustrating-as-hell" for their male patrons. "It's a tease, nothing more. With your industry-standard lap dance, even if you're single, there's zero chance of kissing the stripper, fooling around with the stripper, or sleeping with the stripper. ZERO. Yes, guys whoop and holler and fist-bump and act like asses, but the actual experience, more often that not, fails to satisfy." I don't know if this will assuage the concerns of women who worry about their husband or boyfriend leaving them for a stripper, but it is something to consider.

I'm glad my first lap dance experience was so wonderful because even though I've had worse dances, whether because the stripper just wasn't into it or, once, because she was, but so were a whole bunch of loud, annoying strangers who wanted a free show by checking me out while I tried to ignore them, I know the potential is there for a wonderful dance. For me, strip clubs are a chance to purposefully engage in a very elaborate fantasy. I don't need to dissect every nuance of why I'm into a given dancer, but just go with it, and let myself get swept away. It's fine if lap dances and strip clubs aren't your thing, but don't knock it until you've tried it, ladies, and news media.
Tags:
Views: 2698
Related articles