Simone Corday: Sex and Scandal Behind The Green Door 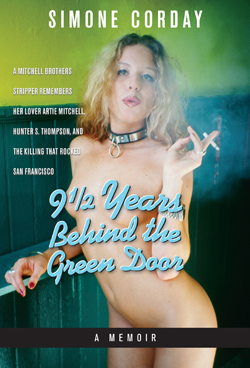 While SexIs talked to Simone about her recent memoir, 9 1/2 Years Behind The Green Door, about the golden era of the flesh business in San Francisco and the brutal murder of Artie, she felt an eerie connection between Jim Mitchell’s son, James, and his current legal woes. Calling it “an odd deja-vu,” James, 29, was convicted a few days ago for killing the mother of his child with a baseball bat. He faces a possible sentence of life in prison.

Now, the son’s murder case parallels that of his father, Jim, who founded the O’Farrell Theater in 1969, with his brother, Artie. Jim shot his brother to death in 1991. He served three years in prison after a well-publicized trial and later died of a heart attack in 2007. Simone was Artie’s lover for almost a decade.

Looking back, Simone, an Army brat, remembers her teen years in Sacramento, California, getting married briefly, doing a string of odd jobs before settling in San Francisco and falling under the spell of the famed O’Farrell Theater in its heyday. In her memoir, she describes working as a stripper and the attraction of the venue with its red hot live shows which lured Hollywood celebrities, sports personalities, politicians, and perverts.

“I truly was not cut out for the 9-to-5 world,” she says. At the O’Farrell, it was a constantly changing world with a lot of artistic freedom. I loved creating theme shows, planning the music, putting the costumes and props and performing, even though it was a strip club and the audience was there to be titillated. I was hooked on the place.”

This was not the tamed movie version of the strippers’ world in Gypsy. “I was working long before the O’Farrell had private booths where dancers could be alone with guys,” she recalls. “For the first several months in 1979/1980, the dancers were naked in the audience, and the place was pretty open. Soon there was a series of police busts, so girls had to wear lingerie or bikinis. I started working in 1981. The guys sat in the theater seats facing the stage but the lighting was dim. Dancers didn’t discuss what they were doing in the audience. You would hear if somebody got fired, although you wouldn’t know exactly why.”

Police records from that time say hand-jobs, blow-jobs, and other sexual acts were commonplace, but everything was hush-hush. “There was subtle encouragement to keep the shows and audience hot because it was good for business.”

In the 1980s, the San Francisco vice squad, under the mandate of Mayor Dianne Feinstein, was determined to crack down on the antics of the theater. “In 1982, the vice squad was coming in with infrared cameras and photographing girls with the customers,” Simone says. “They sent the photos to the Mitchells and began prosecuting them. I heard a lot of the photos were of the same girl who was particularly flagrant.

“I was working the night Marilyn Chambers was busted. She had been doing shows for several days where she was walking through the aisles and guys were touching her. Artie and Jim had the spotlight on her. The cops waited until Friday night to arrest her. Somehow Artie and Jim turned the situation around and it became a publicity coup for the theater. The legal pressure lightened up.” 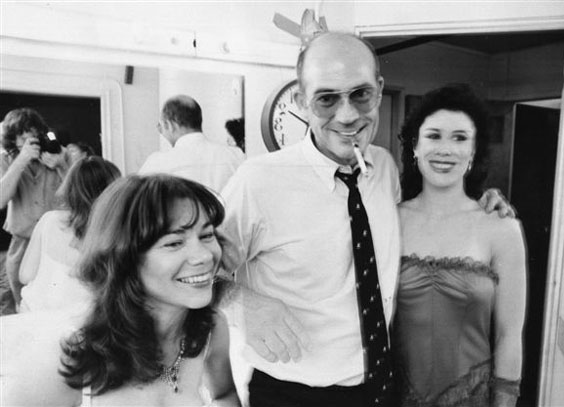 One of the landmarks in porn’s golden era, was the Mitchells’ film, Behind The Green Door. “The movie was notable because of its treatment of interracial sex, the very taboo issue of a black man with a white woman. Johnny Keyes, the co-star, said in a magazine interview that he made love to Marilyn for about an hour and 43 minutes, all filmed. “She came about nine times and fainted,” he added.

“Marilyn is drop-dead gorgeous in that film and you witness her opening up sexually during the movie,” Simone recalls. “Every one of her scenes is amazing. It was groundbreaking with a black actor, to have interracial sex be such a crucial part of the film. There is also a scene with Marilyn in a sling engaged in sex with several men. The movie is still a classic.”

The brothers, now inducted into the AVN Hall of Fame, used profits to produce elaborate hardcore classics including Resurrection of Eve (1973) and Sodom & Gomorrah (1975). One of their last films was The Grafenberg Spot (1985), featured an underage Traci Lords. They were the first to pioneer the transfer of film to videotape while marketing in national magazines.

Hunter Thompson, the outlaw journalist and O’Farrell’s ‘honorary night manager,” often came to the theater. “He had such a brilliant mind beyond all the substance ingestion,” she says. “A truly good guy. He was around the club a lot for about three years. He was fond of my shows. In 1987, the Mitchells started filming their first ever documentary on Hunter, The Crazy Never Die. It was never released.”

The parties, sex, and drugs there were legendary. The drug binges intensified the mood at the theater and the brothers saw it as a fiefdom where they controlled the women with money and political clout. As the mayhem escalated, they fought as they always had throughout their lives.

“Their personalities were so different and the contrast between them grew stronger over the years,” she remembers. “Art’s alcoholism was escalating and Jim wanted to end their relationship. But he would have never left and couldn’t afford to because both brothers had big families to support. They had also signed up for a million dollar business insurance policy, payable to the surviving brother. I think that the atmosphere of entitlement and arrogance contributed to Jim’s sense of invulnerability, thinking he was likely to get away with killing Artie.”

Following the murder and trial of Jim Mitchell, Simone says she was in shock for some time, followed by sadness and rage. The trial became fodder for scandal sheets, the international press and even several books. The political connections came through for Jim, who served only three years for manslaughter.

Simone waited to write her memoir until Jim died, because she was nervous about what he could do. “I knew Jim had a lot of influence and I didn’t think my book would be well-received because of what I was revealing,” she admits, now writing a follow-up volume. “It’s a better book than it would have been if it had come out soon after the events.”
Tags:
Views: 2017
Related articles