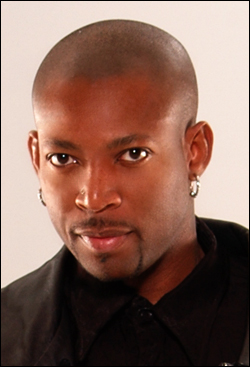 “I think Alexander is the top ethnic director for sure, if not one of the top directors in the business,” Jordan said at the time. “He’s the best at what he does with black girls and interracial. He’s one who understands the genre. He will be shooting ethnic and multi-ethnic titles here and we will give him the widest distribution possible.”

Following his stint at WCP, DeVoe threw his energies headlong into directing, producing, and distributing his films, with his first Jules Jordan Video project, “Dynamic Booty,” in 2007. With the efficient Jordan distribution machinery, he has placed nearly 50 films on the market to date.

How He Makes It Work

According to DeVoe, his entry into the lust business couldn’t come at a better time, because the consumers loved to watch the passion generated by his films. “One thing about being a good director is to understand how to create chemistry between your performers,” he explains. “You must know how to set the pace and not place unrealistic expectations on male talent is paramount to the success of the scene.”

DeVoe is considered “an actor’s director,” 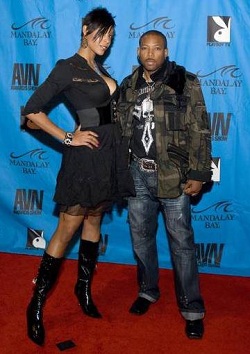 since he keeps light and lively on the set. “You have to know what turns your performers on, their likes and dislikes. When I did scenes for some directors, they never asked what type of females I liked or what types of kinks or fetishes I was into. I used that as a starting point in the preproduction process. That ensures hot passionate scenes.”

Being in control of a production can have a down side as well. “There are some negatives such as shooting bad scenes and wasting time and money,” he adds. “Sometimes you deal with bad personalities and chemistry that doesn’t mix well. In some cases, you deal with agents with girls who don’t do black guys on camera but have black boyfriends. A lot of the male talent have really large egos and that’s frustrating. Or girls who don’t come prepared to a scene or change their minds midway through a scene because they can’t do a certain act.”

Possibly one of the key weapons in DeVoe’s arsenal is his attractive wife, Sharee “Stilts” English, a model, actress and mother. Viewers remember her from her stint on the reality TV show, “For the Love of Ray J,” where she was eliminated in the last episode because she was married.

“Be who you are, not what people want you to be,” Stilts, a co-host with her husband on Wednesdays on LA Talk Radio, the number one internet radio station in the market. The popular radio show features controversial topics and people such as a Tiger Woods mistress, men who suck their own penis, the daughter of an acting icon with a sex tape to her credit, and straight guys performing gay for pay.

“People who know me will tell you that I’m a guy who loves to laugh and do characters as well as tell funny stories about my adventures,” DeVoe says. “I play the devil on the show, while she plays the angel. I’m always trying to get guests to tell intimate details of their lives and reveal sexual things that people don’t know about. Nothing is off limits.”

With numerous prizes from the AVN and Urban X committees, DeVoe wants to branch out into television and mainstream film. There is also a reality TV show in the works, with the contents of it still in limbo.

“I never had a goal to be the best black director,” DeVoe concludes. “I remain humble. I understand the consumer has a myriad of tastes, fetishes, perversions and kinks. I am a black man who makes movies. Let’s stop labeling things in racial terms. I appreciate everyone who buys my films. I love that they trust the DeVoe brand.”
Tags:
Views: 2494
Related articles