John Waters: The Old Rules Are No Longer In Effect 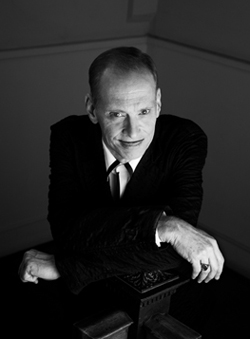 A Baltimore native, Waters rose to fame with several stunning films such as Pink Flamingos (1972), Female Trouble (1974), Desperate Living (1977), Hairspray (1988), and Cry-Baby (1990). He has written several books including Shock Value and Crackpot, all featuring misfits and mayhem.

“They had more extreme lives than I ever had,” Waters says of his choices in this new book. “They gave me courage to be what I wanted to be. Some of them had some bad stuff happen to them and I didn’t have much bad stuff in my life. My career is going well. I’m not surviving any horror stories here.”

Leading off the book is the boyish, still popular crooner Johnny Mathis, which Waters describes as “the polar opposite of him.” He is quite in awe of the intensely private man, who never gets his business splashed in the tabloid headlines.

“He was instantly popular, had no prejudice about being black, although he sang love songs to white women,” Waters adds. “He never did trash, he never walked the red carpet. He had mass popularity from the beginning, kept his personal life to himself, and without turning into an asshole. That’s amazing.”

Given the trend to air dirty laundry in the media, Waters further explains why Mathis is so special. “I think there were articles about his sexuality. Old school people never revealed their personal lives. I don’t think everyone has to bare their secrets to anyone.”

On Tennessee Williams, there is the story of Waters, then 17 years old, going to a gay bar in Washington, D.C., a pitiful sight of ‘early-1960s gay men with fluffy sweaters.’ He says Williams saved his life, telling him that gay life doesn’t have to be so rigid.

“Tennessee made me realize that gays didn’t have to be square,” he notes. “He taught me about bohemia. Bohemia was the most important thing he told me about. He told me about there was another world where people didn’t have to fit in and it was the fifties and people had to fit in. I wanted to be an outlaw. He was a good childhood friend, Tennessee.

Waters says he included actress Tallulah Bankhead because she was in a Broadway play with Tab Hunter. “There’s not much about her that has not been exploited. She’s had several books written about her. I guess I included her because she was the first fag hag I knew.”

There is a real sense of loyalty about him. If Waters is your friend, he sticks with you through a crisis, such as his bond with former Manson girl Leslie Van Houten.

His voice becomes firm but urgent. “The Supreme Court said the state of California has to thin out the prison population but I don’t know that will affect her. She has been in prison for a long, long time and she’s not a danger to any community. She has real remorse. She doesn’t blame everything on Manson. She was a follower. The easy way out is to say ‘I found God. I got a telegram from God.’ I don’t think the state would go for that. Also, it takes away your responsibility.

“She doesn’t even think about Manson,” Waters says. “He’s so far out of her life. I saw him at the trial. Manson was incredibly magnetic at the time. He was a pimp all his life. He knew how to control young girls. No one said Leslie should have not gone to prison but she has served over 40 years.”

Another book subject, Little Richard was Waters’ role model “until he met him” for a disastrous 1987 Playboy interview. He claims he once shoplifted a copy of his song, “Lucille” in 1957. His fallen idol was the inspiration for his trademark mustache and the “turd” scene with Divine in Pink Flamingos based on a childhood anecdote of the singer.

Of the atheist Madalyn Murray O’Hair, Waters’ tone brightens with her mention. “I loved her when I was young because she took prayer out of schools. She became a monster. She loved to be hated. She was insane. She came on stage riding a broom. I believe in the separation of church and state. I went to Catholic high school in Baltimore.

“She would say: ‘You can talk to me about Jesus as long as you’re fucking me while doing it,” he laughs. “She was horrible to gay people and horrible to everybody. I remember a bumper sticker: ‘Prayer is begging.’ I loved that.”

When talk turns to the topic of gay marriage, Waters says, “I don’t mind if it’s called civil unions or domestic partners. I don’t want to do it. So what if it’s not called marriage? Then you hear this talk about the sanctity of marriage. Larry King has been married seven times. What sanctity? There is not any.”

After revealing the dishonored California governor Arnold Schwartznegger wears orange pancake makeup, Waters takes on the folks on the TV show, Jersey Shore: “That show invites you to feel superior, which is not hard. I’m happy for their success. The Situation, I think his name is funny. And that little Snooki, I’m happy for her because she has a job.”

Several reporters try to pin him down about his private life, his lovers, his fetishes, his solitary lifestyle, and even his beliefs about the afterlife. They want something juicy.

“I don’t like rules of any kind,” Waters says, who is starting a European book tour. “I seek people who break rules with happiness. I’m a healthy neurotic. I know I am. You ask about an afterlife and all of that. I don’t believe in it. If they brought someone back, then I might change my mind. I’m open but I’m skeptical.”
Tags:
Views: 1279
Related articles