Secrets of a Sex Writer: “Are Your Breasts Real?” and Other Questions Not to Ask a Sex Writer 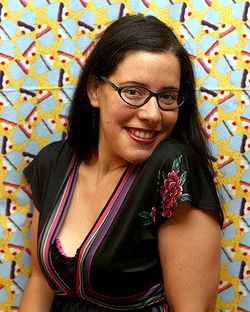 “Are your breasts real?” I was asked this while sitting in Happy Ending Lounge following my monthly reading series In The Flesh. True, the questioner held a postcard featuring me dressed in lingerie, holding the Njoy Eleven between my breasts, promoting a public casting of my breasts I’d had done earlier in the year. Also true: I’m a real woman, not some erotic robot without feelings. I was stunned that a stranger would ask such a personal question (and no, he wasn’t drunk), yet after writing about sex in fictional and journalistic ways for the last ten years, perhaps I shouldn’t have been surprised.

I’m very active in social networking sites, and often my Tweets read more like a catalog of my neuroses and flaws (I missed five flights in 2008) than anything salacious. But the difference between those revelations and the breast question is that when I write, I’m opting in. I’m choosing to expose myself. I control the form and content of what I craft.

In this column, I’m going to peel back the curtain almost all the way and give you a look at the fun side as well as the darker side of being a sex writer. Fun is, say, getting free sex toys sent to me (thanks, EdenFantasys, for the waterproof vibe and the mini clit vibe). Darker is having anyone I go on a date with be automatically privy to things like the handjobs I exchanged with a stranger in the Atlanta airport?or expect instant sex, before we’ve even had appetizers.

I’m not ashamed of anything I’ve written. Writing about sex has always come easily to me (the truth is, far easier than having an orgasm). The process of writing about breakup sex, vibrators, spanking, choking, or topping has revealed so much to me about myself. When I sit down to write an erotica story, I don’t always know what will come out. Sometimes it’s an actual fantasy of mine, something that, in an ideal circumstance, I’d love to try. Often, it’s not something I’d want to do in real life but instead, get off on contemplating. It’s up to me to figure out the difference.

But back to the dark side... There have been times when I’ve assumed that because I do what I do for a living, because I’ve posed for nude photos, because I can’t suddenly pretend to be innocent of the ways of the bedroom, that maybe I didn’t deserve to find someone who’d treat me well. I’ve let that mystique rather than my own heart guide me.

For the most part, my family’s been incredibly supportive. Recently, at the Los Angeles Times Festival of Books, my uncle and cousin attended my sex writing panel, with my cousin loudly cheering me on.

My grandfather, Norman Bussel, wrote about sex in his memoir My Private War about his time as a WWII POW, and reading those scenes made me feel closer to him, not because I knew something dirty about his life, but because he too knows the vulnerability of those kinds of revelations. The person who finds my work most problematic is my mom; she tends to think sex is a private topic (as, I’m sure, do many people).

One thing we never really saw with Carrie Bradshaw was the cost of being so open and revealing. We saw the glamour and the heartache (and, yes, the shoes), but writing about both sexual politics and one’s inner life is a constant challenge. Sometimes I fear it’s made it tougher for me to talk in person with partners about what I'm feeling. It’s far easier to say, “Here, read ‘Your Hand on My Neck’ to know what it’s like for me when I’m being choked,” than to have to explain all the ways it excites me and risk being judged or laughed at.

For all that, though, I doubt I’ll ever stop dissecting what makes me tick sexually. Sometimes, it’s easier to do so in fiction, where if a phrase sounds good, you can go with it, even if, strictly speaking, you never had kinky hotel sex in Kentucky. You can be more honest, at times, in fiction because nobody knows who you’re writing about. Protecting the people I’m intimate with while also revealing important truths about my life that I know are relatable is a precarious challenge.

I once wrote about an ex who didn’t want to have sex with me. It was a problem we’d only halfheartedly acknowledged between us that hurt me a lot. I wrote it deliberately using the first person voice, to get across what that scenario meant for me. I’m sure he’d have his own story, his own take.

The benefits far outweigh the downsides. I think my writing about sex has made me a better lover because it’s made me more in touch with my own desires, and more empathetic. It’s not that I sit down and detail every sexual experience I’ve ever had (that would take a long time) but that I ponder the implications of my desire; I don’t just do something and forget it.

What’s funny to me is that I think sometimes people assume I have fake boobs (as already stated, my 36Cs are real), tattoos (not yet), do drugs (nope) and am wild and crazy (you be the judge). In my twenties I was much more promiscuous; some of that sex I’m proud of, some of which I think was an overreaction to finally feeling sexually desirable, but all of it has made me who I am today. In my daily life, I’m much more of a workaholic than a sexaholic and, at 34, am more likely to swoon over an adorable baby passing by in a stroller than a topless guy or a hot girl. Okay, I do still check people out, but I’m far more interested in person-to-person intimacy than wild sexual adventures-or rather, the sexual adventures I want to have are ones that bring me closer to the person I’m dating. And that process is what I plan to explore here.
Tags:
Views: 1885
Related articles