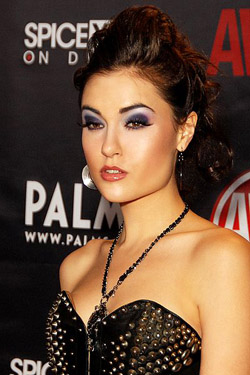 Glenn Francis, www.PacificProDigital.com
This fall, adult film actress Sasha Grey will make her debut on HBO’s Entourage as Adrian Grenier's girlfriend. What does this mean, to us, the sex-positive people of the world?

By now, the story’s a familiar one: Famed independent filmmaker Steven Soderbergh contacts newbie adult actress Grey via her MySpace page, with the invitation to play the part of a prostitute in a movie he would call The Girlfriend Experience. The backstory, of course, is missing from this tale (because Soderbergh must have first watched her performing … right? And perhaps found that performance … stimulating enough to drive him into a quick bout of onanism … right?) But this is par for the course, for Grey’s seamless entrance into mainstream television very much depends upon the true nature of her very flagrant sexuality going missing.

But America is skillful at the practice of half-seeing; America, in fact, specializes in deliberately obscured vision. Currently, Ice Cube has a show on TBS. Ice Cube. The one-time anger-rapper, whose credits include “F*** the Police” and “Straight Outta Compton” now makes his living portraying family men in movies like Are We There Yet? and Are We Done Yet?—and TBS, sensing more of the money that Tyler Perry's already brought them with the African-American targeted sitcom House of Payne, is willing to go along with the facade.

Does Cube still believe that N.W.A’s-wanted-for-homicide? The official line, of course, is no, but conventional wisdom says that Cube likely bears some of the original sentiment of racial anger and mistrust he bore publicly 20 years ago—he’s just not talking about it. If he’s a stand-up guy and doesn’t bring it up in interviews, TBS tacitly agrees to play the same hush-hush game; and in the long run, they’ll both profit monetarily from the tamping-down.

You won’t, though, see Grey performing the tricks that made her famous to a different and more specialized audience—the vicious deep-throats and the flying spittle; those feats will instead be implicit, and at the same time, denied. Double-think. It’s good for the ratings.

Some would argue that America needs double-think. After all, it’s adaptive. How else could we possibly watch Tiger Woods play golf these days? Even 10-year-old boys realize that Woods messed up, big-time, in his marriage last spring, and those of us who spend way too much time on the Internet have likely read a few of his weird, inarticulate sex-texts: “I know you have tried every positing imaginable but what turns you on besides a dp?

None of us like the sexaholic, cheataholic, Hootie and the Blowfish listening multibazillionaire—but then, at the same time, golf would be even more intolerable than it already is without him. Network TV announcers are saddled with the job of not laughing when they talk about his wrist action; the simple fact is, they are under strict contractual obligations to never utter a word about the details of his indiscretions. Unwritten rule: You can talk about it in US Weekly—but you can’t let it slip while he’s on the small screen.

The refreshing thing about pornography, then, has always been its tendency to include everything—the filthy details, the peculiar fetishes, the boring minutiae, and most famously, that sordid kind of nonsense that pre-scandal Woods apparently spent most of his down-time between putts fantasizing about. All that stuff gets center stage, on display for all to see under the harsh, bright lights, and the result is a jarring disjuncture from the well-laid lies of big-money corporate entertainment. For many viewers, tired of the bullshit, the effect is not altogether without pleasure.)

But with the mainstreaming of pornography, and the publicizing of many stars’ private sex lives, from Kendra Wilkinson’s tedious sex tape to Delonte West’s supposed disastrous affair with LeBron James’ mom, from Bill Clinton to the newly divorced Gores, a confusing breach in the once placid fabric that separated sub rosa carnality from surface suburbia has appeared. Those who once agreed to remain closeted have begun popping up in the noonday light. What’s next, after all—porn stars on the Teletubbies? Max Hardcore, popping up on QVC, or getting chummy with Pat and Vanna?

Or perhaps, will the pendulum swing back in the opposite direction: As pornography grows less a world apart from the mainstream, will it become more inhibited, less designed for serving the confessional impulse? Will Sasha Grey and Belladonna, no longer spurred on by the need to appear transgressive, begin to mail in their scenes—producing yawners where once we gaped in admiration?

Most of us liberals applaud integration. But maybe the double-thinkers know something we don’t. For America to continue to function effectively—and for our sex industry to retain its weird, strong flavor—perhaps these worlds are better off separate.
Tags:
Views: 1039

Sam Benjamin
I'm a graduate of Brown University who took the money my parents spent on me and turned into a filthy (but good-hearted) pornographer. It was all done in great spirit, of course. I spent five years within the adult film industry, attempting to make so-called "sex-positive" films, in my independent, muddling manner, and going nearly broke while doing so. After a while, I ended up getting caught up in the mainstream ethos of the Los Angeles sex industry, which I doubt anyone would defend as "sex-positive." I burnt out and dropped out after half a decade of smut - it gets inside your brain! - but, goddamn it, sometimes I really miss it. I enjoy big personalities, ridiculously honest women, neurotic Jews, and bad wine. '80's porn videos, and the sweet music locked there within, are also a major passion.

Other articles by Sam Benjamin