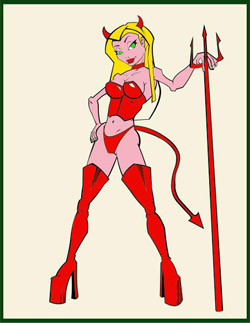 I’m not just a sex writer. I’m a horror movie enthusiast. Which I suppose makes me an exceptionally bad girl. So figure if this story were a slasher flick, I’d be dead about 750 words in.

Arousal and fear: Inexorably linked sensations through which the majority of life on Earth has managed to endure—the urge to couple, the instinct to survive. Profound thoughts for a piece about zombie-stripper flicks, but even a low-country bog’s got a few places deep enough to stash a body.

In any case, each of these primal impulses possesses an ability to inspire the same bottomless sensation in the pit of one’s tummy, the same butterflies, the same sense of wonder, of not knowing what’s around the corner. In fact, it’s an elixir so heady that people often seek to combine them in all manner of ways, from giving head at the office to autoerotic asphyxia and everything in between.

It’s no surprise, then, that sex and horror have been the Reeses Peanut Butter Cup of cinema since its inception. Sure, some people take horror movies at face value: Slashers. Aliens. Homicidal inbred families. Whatevs. But often, there’s a lot of subtext going on.

Horror can be a magnificent platform for bringing scathing social commentary to the drooling masses, tackling subjects like consumerism, racism, corporate greed—you name it—with aplomb. Said topics are deftly skewered, submerged in a sugary, undulating vat of fantastical violence and gore. After all, if you want the public to eat healthy, you’d best dress it up like a candy apple and call it junk food.

Sex, however, is ever-present. Whether gratuitous or graphic, beautiful or bloody, funny or freaky (or a piquant, visceral combination), sex is as much a part of horror as gore because fear and sex are conjoined. Fear, like sex, makes your heart race. It elevates your senses and amps your adrenaline. Fear is a pungent aphrodisiac because it’s entrenched in the unfamiliar. And nothing turns people on like a little strange.

But can sex in a horror movie can really be that sexy given the overarching content? Can someone actually get aroused watching the hilariously demented mutant sex in Basket Case 2, with its blatant pleasure-grunting and sickeningly wet sounds that likely had Foley artists experimenting through innumerable Jell-O molds and past-due pork chops?
To that I say: Google “coprophilia” and answer your own question. Turn-ons, my friends, are exceedingly personal

The love scene between Mickey Rourke and Lisa Bonet in 1987’s Angel Heart is memorable for a number of reasons including:
a. Cosby Show fans worldwide finally got to see Denise Huxtable naked.
b. The graphic and extended sequence—heavily edited to avoid an X-rating—as they get it on in a dilapidated New Orleans hotel room beneath a colossal deluge of blood.

Vampires and sex are, of course, inseparable. Even the hideous Count Orlok, star of 1922’s Nosferatu, was deconstructed in Freudian fashion, not unlike his comelier, more conventionally seductive brethren. The vampire, supposedly, is the id. It represents depravity, the devil, and temptation. Sapphic vampires, however, tend to knock the heat up a notch—particularly when portrayed by Catherine Deneueve.

Why do we sprinkle sex atop our horror like so much extra sugar on a bowl of Cocoa Puffs? The short answer is: “Why not?” Like sex, horror provides release. We sit in the dark, intently focused on surreal sensations, afraid of—yet aching for—the eventual payoff that makes us scream and jump into one another’s arms.

It also allows us to delve into an innate fascination with our physical limitations, far surpassing what even the kinkiest among us privately explore. Clive Barker’s Hellraiser is a carnival of desire and torture and the blurry line betwixt. Its demon Cenobites volley between Hell and Earth, visiting eternal physical torment upon the souls whose own dark curiosities call them forth. Generally speaking, most seem to regret it—in hindsight.

I think it’s even simpler. Humans are base creatures, really, and for all our wondrous achievements, we still fancy fucking and killing one another. Sometimes both. As our more depraved impulses are largely frowned upon, we symbolically (and subconsciously) enjoy digesting them in cinematic form at the local multiplex. Popcorn optional.

In 1996, Wes Craven’s Scream dissected the basics of horror with great success. Watching Halloween, one character wonders aloud when he’s going to see Jamie Lee Curtis’ breasts and is schooled by his pal. Not until Trading Places in 1983, he says. “She didn’t show her tits ’til she went legits.”

It’s true, you know. People who get laid in slasher movies are, more often than not, spectacularly dispatched before the film is half over. Those from the subgenre’s peak era—late ’70s to early ’80s—have done quite a bit to earn the ire of feminists who call these films misogynistic, claiming that female victims are being punished for their sexual freedom.

For the record, as a card-carrying member of the Gynocracy (granted, one for whom portraying an entrail-slurping zombie in a Romero movie would likely be a dying wish), I don’t see what all the fuss is about. Even now, the majority of horror fans are young males. In 1978, when Halloween hit theaters, the male/female ratio of moviegoers was likely even higher. Hot girls and grisly deaths would be the addictive principals of the product—if the genre’s pioneers, with their painfully low budgets, gave it even that much consideration.

Many slasher pics are also “final girl” movies, so-called, in fact, because the last person standing—the hero who eventually exterminates the maniac—is a woman. But the fact remains that she’s generally the one who keeps her clothes on. Occasionally, however, roles can be reversed—with sexy results. And I use that term very loosely.

In the 1995 release, Species, the beauty—a magnificent and oft-naked Natasha Henstridge—is the beast (called Sil), an alien determined to mate with a human and produce offspring that will presumably take over the planet. Ironically, Sil’s DNA donor, following a string of gruesome failed attempts, is one of the scientists out to stop her. The doomed anthropologist, played by Alfred Molina, fails to recognize the supermodel-stunning woman inexplicably starved for his man parts because she has—wait for it—changed her hair.

If this isn’t a warning that men need to pay more attention, I’m not sure what it is.

Vagina dentata is not the eerie incantation from The Day the Earth Stood Still (or Army of Darkness, for that matter). It is Latin, meaning “toothed vagina,” and the lore and legend of such fearsome maws is present in several cultures—generally cautionary tales for men to keep it in their pants.

Teeth, which debuted at the Sundance Film Festival in 2007, is one of those black horror-coms where the victims are hardly innocent. Each deserves precisely what he gets. You’d be hard-pressed in deciding which of the graphic amputations gets the Worst-in-Show ribbon—or best, depending on how you look at it. And if, for whatever reason, you’re ever looking to get out of having sex with your beau, this charming little film could be your best line of defense.


Hippie “Love Scene”: The Evil Dead (1981)
The only thing that pains me about this—aside from watching demon-possessed trees restrain and sexually assault the hapless maiden who has [audible sigh] imprudently wandered out into the dark, deserted woods to investigate suspicious noises—is that it occurs in the first installment of this brilliant Sam Raimi trilogy and not the third (Army of Darkness), which may well be my favorite film of all time.

They Live (1988)
This John Carpenter sci-fi thriller is most notable for casting kilted wrestling star “Rowdy” Roddy Piper as the lead and a fight sequence so ridiculously long and over-the-top it was parodied, move-for-move, on an episode of South Park as a throw-down between two handicapped children.

Its plot deals with one man’s discovery that America’s leaders are actually members of an alien race broadcasting a signal that prevents humans from seeing them as they really are (repulsive skull-faced humanoids). In its final scene, just as the signal is destroyed, we see a bare-breasted woman riding her partner with abandon. She looks down at her lover only to realize that he [gasp!] is one of them.

Come to think of it, the “I came here to kick ass and chew bubblegum” line is pretty damn tasty, too.