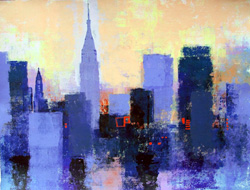 Colin Ruffel, crabfish.com
This may come as kind of a shock, but I don’t hate New York City.
I know! After all that complaining last year, throughout 2010, after five trips to the West Coast (aka the Best Coast) and a glorious, praise-ful write-up each time I returned, after rolling my eyes and sticking out my tongue and answering, “Oh no, I kind of hate it,” whenever my friends from home ask me if I just love New York, I am ready to say: I don’t hate it.

Part of that is because 2010 was awesome. No seriously, file under: Best Year Ever. I can’t remember a better year. Maybe the year I left home? Well, no, as awesome as it was to leave and gain my autonomy away from my family, I had so much farther to go and I struggled hard. Maybe the year I graduated college? No, that year was full of struggle to find a full-time job, which I didn’t end up finding, so I stayed at the same job I had in college for the next nine months, until I moved across the country. Maybe the year I moved to New York City? Hah! Just kidding, that year was awful, probably more like one of the worst ever.

So no, I can’t remember a better year. It was fantastic. I am loving living in Brooklyn as a freelancer. I am loving this patchwork make-shift DIY career I’m putting together, with books and columns and workshops and lectures and performances, with Tantra studies and Buddhism classes and my membership at the local gym and my little writer’s space that I rent (and don’t use frequently enough). I love my pretty apartment with the brick walls and the butter-yellow light upon sunset in the wintertime. I love my girlfriend, love living with her, especially now that we have a place all to ourselves. Sure, we’re still working out the details. But generally, it is such a thrill to wake up with her, to share sheets with her, to know that she’ll pick up a new tube of toothpaste and I’ll pick up a couple of avocados on the way home.

I love my sweet cats and the ways they make a house a home. I love that we have a car and can explore the nearby wineries, distilleries, restaurants, farms, U-picks, beaches, parks, campgrounds, and other various adventures. I love that I don’t have to trek in to Manhattan every day with the other thousands of commuters that make the city swell and burst, stripping it of its resources in drug stores and banks, before they crawl back out through the tunnels and bridges to return to their suburbs, exhausted, heavy-lidded, defeated. Oh no, I don’t miss that. I love that I can wear whatever I want, a tuxedo or a full sleeve tattoo or a flannel plaid shirt, and I barely get a second glance. I love that it’s appropriate to wear a collared shirt and a vest to brunch. I love my friends!

… but that’s not my intention, I swear. And I’m not saying this to rub it in. I’m just saying, when I started thinking about it, 2010 really rocked.

I know that’s kind of a rare statement to make at the end of the year. If my Facebook news feed was any indication, I’d say about four out of five people who made any sort of statement about the New Year said that it had to get better in 2011, that things couldn’t possibly get worse, good riddance to 2010. I mean, does anybody ever say, “That was the best year ever!” Well, I’ll say it: 2010 was great.

I hesitate to say it was the best ever, but my friend Greg said, “I can say without hesitation that my life is better every year.” I love that. And really, what better way to live? So 2011 will be my best year ever, I’ve already decided.

Part of what I’d really love to do in 2011 is make peace with this big ol’ crazy concrete jungle of a city in which I live. I’m getting close to the mark where I’ve lived in New York as long as I lived in any other city since I left home, and that’s kind of strange, but also feels good. It’s starting to feel like—dare I say it?—home. Like where I am building a life.

I had a dream in the late summer where something was wrong in my hometown, I forget what it was, my mother was sick perhaps. I wasn’t worried about that part of it, but it meant I had to move home immediately. At first I was excited—Great! Time to pick up and go, to revisit the land on which I grew up, to make friends with the mountains and the water and the rainforest again.

But then, I realized that in order to go there, I would have to leave here. I would have to leave New York. And I thought of my friends, my opportunities here, the annual events that I’ve come to look forward to which mark time passing, the reading series that I’m still co-producing and co-hosting monthly—and I felt like I’d been punched in the gut. No more throwing events in the dive bars of New York City? No more happy hours at Ginger’s? No more swing dancing? No more H&M?

And I knew when I woke that I really wasn’t. I’m not. I’m still working here, I’m still trying to get deep down underneath all this concrete and grip the soil, find something to dig my roots into. I don’t think I’ll ever have the connection to the earth here that I do in the Pacific Northwest, but what can I say, I’m a Pacific Northwestern American, and I probably always will be. I do want to be closer to my parents as they get older—they’re both turning 60 in 2011, and I plan to be there, up north in Alaska, when they do.

But meanwhile, I want to love where I’m at. I’ve always said that I felt like I could make New York into anything, there is so much here that we can all have our own private New Yorks, but I haven’t felt much success with that until this past year. It took a long time to build a foundation in this city, and I finally feel like I have one.

So in this New Year, I promise to love New York more, and stop taking the amazing things for granted. Stop complaining about the lack of mountains or trees or soil or earth or wildness, and start recognizing more of the value of the giant, human-made playground in which I am immersed. I promise to enjoy more restaurants, see a Broadway play, go camping nearby, visit the farm that supplies my CSA, explore the Eastern seaboard a little farther, maybe finally get up to Niagara Falls.
Tags:
Views: 967
Related articles