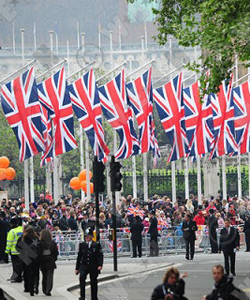 As the wedding of Prince William and Kate Middleton loomed over us, you’d have thought an anglophile like myself would be faint with anticipation, just from the sheer Englishness of it all. A royal wedding, for tit’s sake! Westminster Abbey! Approval of the Queen!
Outside of a good banger and some spotted dick what could be more British than that?

Yet despite my idiosyncratic notion that if it’s British it’s probably better, so far I had little urge to click on a single story about WillsenKate or Winsdorton, or whatever hybrid name they’ve gotten by now. It’s disconcerting, this emotional impotence: I should be aroused, but I can’t raise so much as an eyebrow eyebrow over the royal blah blah blah.

In my defense, what we have here, after all, is a young, affluent, attractive straight couple getting married. What in the world could be less intriguing than that? They’re doing exactly what is culturally expected of them at about the right time in about the right way. It’s like getting excited when the sun comes up or the cat makes it into the litter box. It's what's supposed to happen. If Kate had a third arm damn right I’d have wanted to see the gown. If Daniel Radcliffe was joining them as a brother-husband I’d pay my life savings for a sex tape. But human behavior has not gotten so weird that two straight people marrying each other is a compelling event. It’s done 315 times a day, every day, and that’s just in Las Vegas fercrissake.

So for those of you who prefer a few delicious hors d'œuvre to a ten course meal of enough-already and who would like a break from the fanfare, here are 20 sex-and-romance related factoids that are, I think, more interesting than another wedding.

1. The male bedbug has a penis as sharp as a knife and breeds with the female by ejaculating into the wound in creates in her. One just hopes he mentions this in his Craigslist ad.

2. A report in the Journal of Personality and Social Psychology says that in male-female relationships, men are the ones who generally say "I love you" first. Whether they mean it wasn’t part of the study.

3. In the UK children as young as 12 can be given a drug that blocks the onset of the traits of puberty if the child has Gender Identity Disorder — having been born one sex but wanting to be another. Drugs: is there anything they can’t make better?

4. According to Anxiety Insights Phobias: A-Z, Fear of losing an erection is called medomalacuphobia. Since it doesn’t say the erection has to belong to you, I can confidently say I’ve had this fear.

5. Shirley MacLaine’s new book I’m Over All That reveals details of her 30 year open marriage to businessman Steve Parker, including the time she had three trysts in a single day. At the time such things were in style — but in the end they proved not to be her style.

6. A merkin is a pubic wig, invented in the 16th century and used by prostitutes who had shaved to rid themselves of either public lice or signs of disease. Modern women, unsatisfied with their lower locks can dye them with Betty Beauty products, “for the hair down there.”

7. Kegel exercises are usually thought of as something women but they also help men with ejaculation control, quality of orgasms and prostate health. Nothing like fresh-squeezed.

8. LOLbrats: hilarious pic of school kids reacting to sex ed lecture. I hate to tell them this, but sometimes adults get that look when confronting with the real thing.

9. Nerdiest flirtation device ever: perfumes that smell like elves, orcs and halflings. Fingers crossed that the elvish scent is that of Keebler cookies.

10. According toWoman's Day, a heavy make out session burns more calories per half hour (238) than actual sex (144 per half hour). The reason? Increased heart-rate from anticipation.

11. When FilmCritic.com made their list of the Hottest Girl on Girl kissing scenes kissing scenes in film how the hell did they miss Deneuve and Sarandon in The Hunger?

12. In 17th century Bologna a corpse was discovered with two penises (also known as diphallic terata) and since then 80 more cases of same have been documented. If this article was on film you could see the author making the thumb-and-pinky “Call me!” sign to any of these exciting potential new friends.

13. Gonorrhea is developing a resistance to the antibiotics typically used to treat it and could one day become a superbug, which sounds cute, like a “Herbie” movie, but really isn’t.

15. Evidently the only person in the whole world who might not be pleased about the breath-taking Lizzie Jagger posing for Playboy in May is her dad, Mick.

16. If you saw Margaret Cho’s show “I’m The One That I Want,” the phrase “I'm here to waaaash your vagina” is burned into your brain forever. In real life, your vagina is self-cleaning so you want to keep the soap out of there (another tip from Woman’s Day) as it can whisk away beneficial flora. I can vouch for this personally — after getting chronic yeast infections I listened to an RN friend, stopped using soap and have been as yeast free as a matzo ever since.

17. According to PopSci, the oldest woman in the world to give birth at age 70 is now dying of old age. Rajo Devi Lohan is too weak to recover from complications after the in vitro fertilization birth that cost her poverty-stricken farm family thousands of dollars. Her doctor, quoted in the Daily Mail said “…at least she will die in peace…she does not have to face the stigma of being barren.”

18. It’s said that if it exists someone has a fetish for it and belly inflation fetishists prove that the human imagination knows no bounds by having discovered that what they like…what they really like….is sticking air hoses up their butts to make their bellies gigantic. Why not just eat stuffed crust pizza and watch TV, like the rest of us? (PS: Bizarre magazine, in the above link, notes the dangers of the practice and “can’t stress enough that inflation is a bad idea.”)

19. If Barbie were life-sized but kept the same proportions as a doll she’d have boobs like bowling balls, tiny little child feet and the BMI of an eating disorder patient. Galia Slayen made a life-sized model of the doll as part of her eating disorder recovery and has raised over $10K for the National Eating Disorder Association.

And, okay….one for the royal couple…

20. Brew Dog, a Scottish brewing company has made a special beer to make sure the big occasion is properly big. “Royal Virility Performance Beer,” is laced with Viagra. Maybe that’s what I need to get some arousal going for the big event. Cheers, mate.
Tags:
Views: 1650