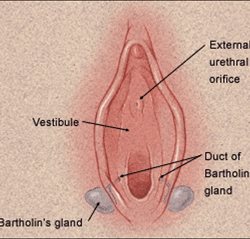 2003 Marcia Harstock - http://www.aafp.org/afp/2003/0701/p135.html
We’ve all read many articles on our more erotic pleasurable spots, those many spots down there in our nether region that pleasure us so well, but what about the one that can get infected and cause pain? I’m talking about the Bartholin Gland, which is located on the outside folds of the labia. These glands lay mostly in discreet places and out of harm's way during our lifetimes but occasionally they can become irritated, even inflamed, and if not treated, infected.
The seventeeth century was a great era in the study of female anatomy, Dutch Physician Regnier de Graaf at the time became aware of what’s now known as the G-spot later named after German gynecologist Ernest Grafenberg. Also in the seventeenth century, Caspar Bartholin the Younger described what’s currently known as the Bartholin glands. They exist in both men and woman but it's the Batholin Glands in women I wish to review here.

It happens occasionally with me in my life that a cyst develops down there in my nether regions where the Bartholin glands resides and a most uncomfortable one at that. The duct becomes blocked, fluid then builds up in the gland and low and behold, a cyst is formed. If the then developed cyst becomes infected then of course it abscesses. This is the painful part, I can tell you from experience that sitting or walking anywhere is a most unpleasant experience and immediate treatment is required. When it first happened to me I was shocked to hear this referred to as The Newlyweds Disease especially since it occurred four years before my first sexual encounter.

In my younger days, this happened quite frequently and I would take trip to my GP and have it lanced, followed by strict cleansing or healing routine and no sex until it completely heals. The routine would consist of three warm sitting baths a day with Epson Salt, a thorough drying, baby powder to keep the area dry, and cotton panties.

While the infected Bartholin cysts can be caused by sexually transmitted infections (STI’s), that’s not the only way they can be formed. For me, it happened by wearing non-breathable clothing like nylon panties, pantyhose and slacks continuously. And of course for me it always seemed to happen when I lost weight and wore tighter, more restrictive clothing in the hot humid weather of summer.

Over the years, after it happened the first couple of times, I learned to be more careful, daily cleansing was not enough, cotton panties became a staple. I replaced pantyhose with thigh-topped stockings and took care to wear looser clothing, dresses and skirts versus slacks - especially when my weight fluctuated.

My doctor years ago had warned me after the second cyst if it was to happen again it would need to be removed however, even though it has happened again, my doctor has retired. Today, while researching the internet to write this article, I discovered that it should have been been removed because it could possibly be an indication of cancer especially since I'm now past the expected age for a Bartholin Gland cyst to occur.

I have an upcoming medical exam in September with my current doctor, one I'm comfortable to discuss anything with. My Bartholin glands will be a primary topic of discussion at that time especially now. Yes, the reason why I’m writing this article, it has happened again, fortunately for me this time it didn’t abscess as in the past and drained on its own. At an age of almost 60, when this mostly known to occur to women in their 20's-30's or in their child-bearing years it has occurred for me yet again. It's time to resolve this once and for all and stop delaying the inevitable.
Tags:
Views: 3620

Hummingbird
Now 6 decades young! I feel full of vitality and energy. Life is good, no, as Tony the Tiger says: GREAT!

Looking forward to new challenges in my business life and pleasurable experiences in my personal one.